A New Postcard from Toronto's Waterfront

It's been a while since I took RTH on a tour of the Toronto Waterfront. Sure, Jason Leach pops over here once in a while to sit in traffic and scare the tourists, but he doesn't live here, so what does he know?

The last time I sent a postcard was 11 years ago (Christ we're getting old), before the Queens Quay makeover. So, as I have nothing else to do, I'm going to bring you with me as I take another trip along the shore.

I set off with my wife and youngest daughter, Molly. I needed to stretch my legs and soak up some nature on the Island, so we set off for the short walk to the ferry terminal.

Strolling down Lower Sherbourne, it occurs to me how great it is to see the new condos reaching for the skies around Sherbourne Common. It won't be long before this barren stretch of concrete is teeming with life.

Two thoughts occur to me as we jaywalk across Queens Quay:

As we reach the new condos at the foot of Yonge, we notice something we haven't seen before: Life. Captain John may have sailed off into the sunset (or the scrapyard) but the new Pier 27 development is mostly populated now and it's nice to see folks strolling around doing their shopping, walking their dogs and going for a jog.

When we reach the ferry terminal, we realize our day is not going to go as planned. The line-up is enormous. A trail of mums and dads, kids and strollers weaves its way around the corner and onto the road.

What is going on?

It turns out there's an Easter egg hunt on the island and the ferries folks didn't get the memo. 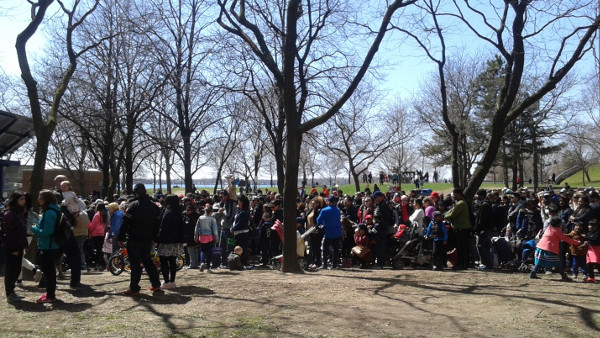 I send a tweet to the City of Toronto - Is anyone awake? #forwardplanning. And try to think of a Plan B.

It's not the first time we've seen this. In fact it's all too regular. There are a great many festivals and events on the Toronto island and yet, more often than not, the ferries can't cope. 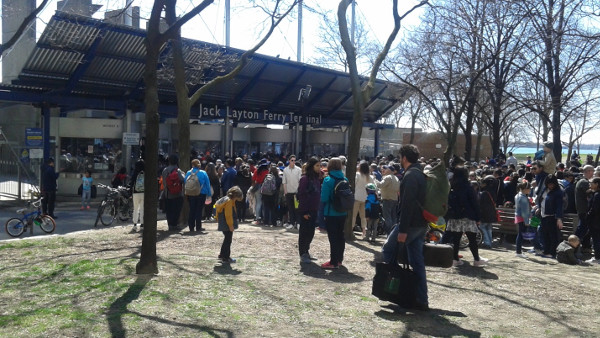 WWJS? (What Would Jack Say?)

I think up a couple of island hopping options as we mull over our next move:

Molly has an idea: "Let's go to the Aquarium!"

Oh great, how much will that cost?

My day has suddenly gone from a no cash required nature stroll to a concrete trek + admission.

I think about if for a few seconds and reply. "Sure, Molly!"

You know dads and their daughters...

We turn west and start walking along Queen's Quay. As we bask in the shadow of the new towers between Bay and York I wonder why there is still no direct path along the actual waterfront. There are vast sections where you can't see the water at all.

If you try to hug the lake heading west, you have to zig-zag around the Sugar factory and the various condo developments and docks.

There must be some solution to this. We came to see the water, after all. Why not put a swing bridge across the Sugar Factory dock? And add a walkway to the ferry terminal? Do the same at the York Street Water Taxi stand?

All this weaving up and down interrupts a pleasant lake side stroll and forces many people to just stick to the Quay.

We reach Harbourfront and flop down for a coffee. As I look around the Harbour and Canada Squares I notice how empty they are.

Where are all the people? 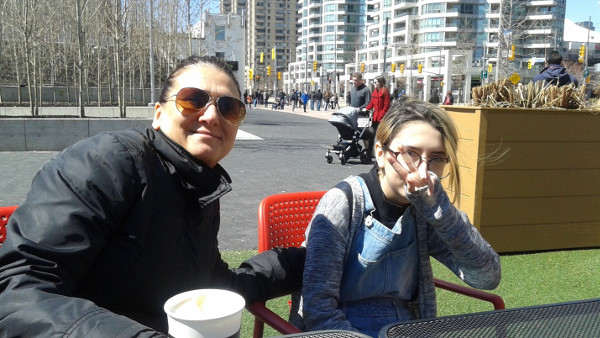 Where are the people? 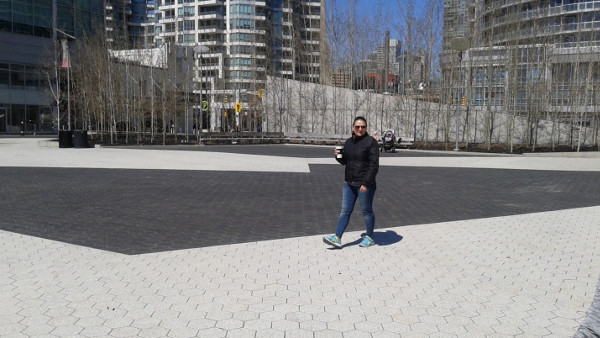 Harbour Square. Only one person there (my wife, who I asked to go stand there) 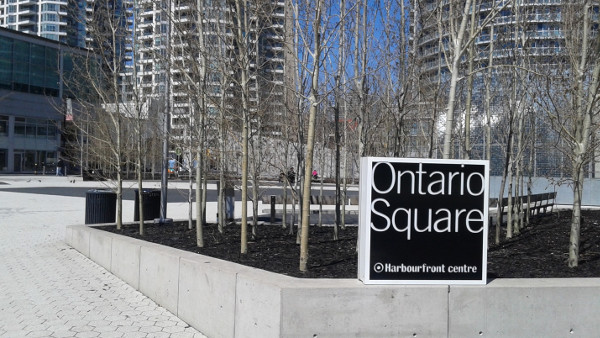 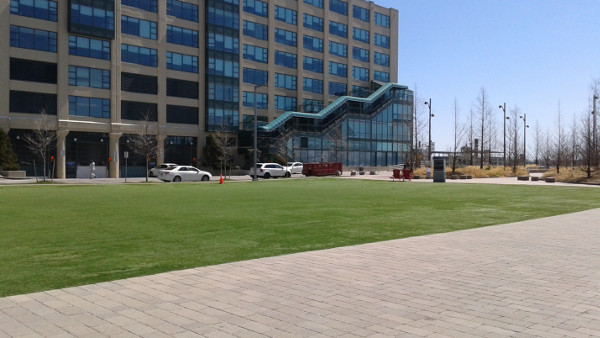 Canada Square. Grand name - not much of a square.

People mill around the edges of the squares and then walk on by. No wonder. These squares are soulless.

Canada Square is a tatty flat block of Astroturf. There is nowhere to sit and nothing to see. Every few weeks there's an art display erected but in the meantime it's just grass. And fake grass at that. Couldn't we add some features here? A waterfall? A statue? The area is all about art after all.

Ontario Square is similarly devoid of character - just a block of open concrete surrounded by foliage.

Toronto needs to look to places like Vienna if they want to really understand people places. When I was there five years ago, I was amazed at all the gathering spots. Most of them weren't that grand, just pleasant and functional: little parks nestled into neighbourhoods.

Many of them formed shortcuts for foot traffic, thus rewarding bench riders with something to look at. After all, everyone knows the best park of urban living is sitting around watching everyone else. 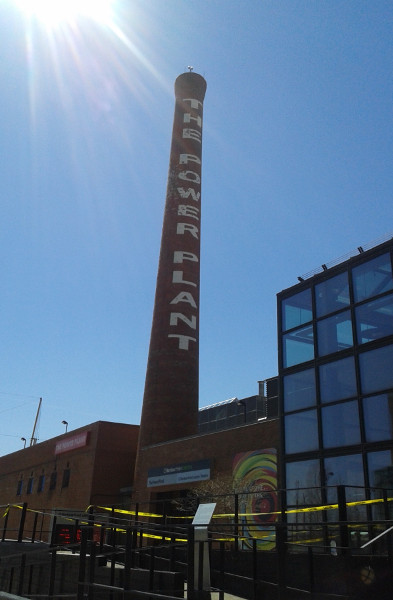 We walk past the Power Plant and Harbourfront Centre. I used to pop into the Harbourfront Centre with my kids to check out the glass blowers, potters and art installations. But then I realized we were invariably bored or puzzled.

The last time I went there was room full of mannequin heads wearing hats and earphones. You had to put on the earphones and listened to the 'thoughts' inside the person's 'head'.

We skirt around and walk along the water's edge past the Harbourfront ice rink. There is no ice now of course and as I look at a couple of little scamps wheeling around the concrete basin on their scooters, I wonder what the space will be used for this summer.

That's the dilemma of being in the middle of the northern hemisphere. If it's not freezing it's usually a nice enough day for a walk. Winter facilities need to double up as something for the summer and vice versa. Maybe the city will throw in some ramps and turn this into a skateboard park? 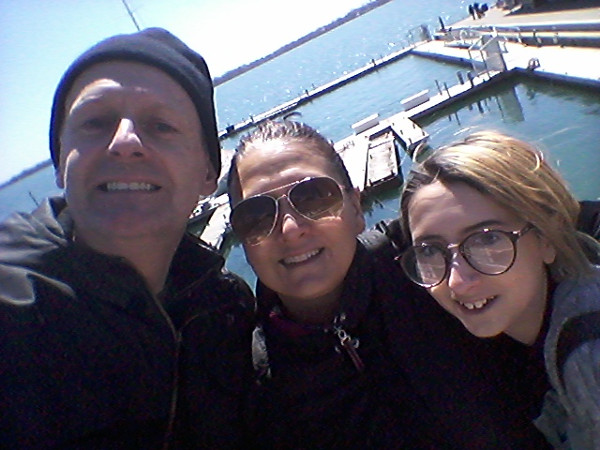 We take the bridge over towards the newly renovated and hugely popular Amsterdam BrewHouse and head up Rees Street to the Aquarium.

As we wait for the lights to change I marvel at the mixed road uses thrown together at the intersection. It's chaos. A skateboarder and a cyclist weave around me as I tip toe across the bike path. A streetcar dings his bell as he trundles by. 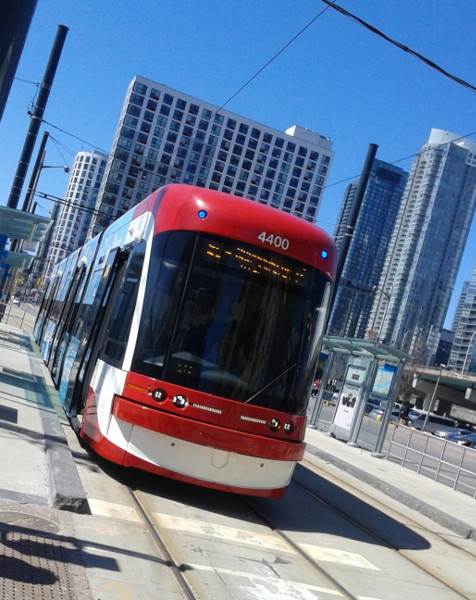 It's busy on the Waterfront. Watch out for these

We are sandwiched onto a small patch of asphalt designated for pedestrians waiting to cross the road. It seems to me we'd be safer in the traffic. I'm glad I read the manual before heading out. I pity the poor sods trying to control their kids and plot their way across. It seems to me that the Queen's Quay makeover is a definite improvement, but there's still a way to go.

We reach Lakeshore and stare up at the underside of the Gardiner. Man, overhead roadways are ugly. 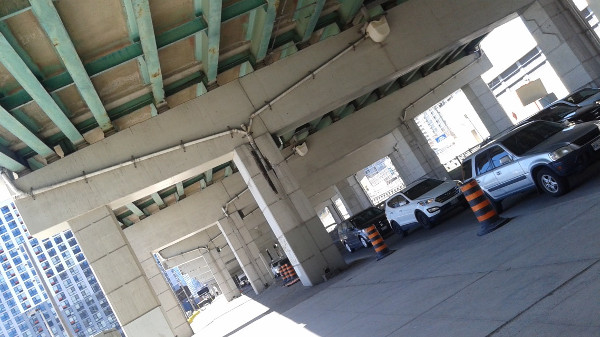 Looking up at the Gardiner. Not a pretty sight.

Our little man lights up on Lakeshore and we run for our lives. The first obstacle is the ubiquitous left turning dipshit.

Uh oh, here he comes. Why do these idiots lurch into oncoming traffic then screech to a halt before edging towards your kneecaps?

Hey - It's not my fault you don't know how to drive and you've put yourself into the path of oncoming cars. Why should I rush?

When we reach the halfway point, we notice that we really do need to rush - the countdown clock is at 7 seconds.

Run! We lengthen our strides and scramble to the other side. Phew, 1 second to spare. God help me when I'm old.

There is a new hydro station going up north of Lakeshore. Unfortunately, the developer didn't spare much thought for the foot traffic. The sidewalk has been swallowed up but hey - at least the two car lanes are intact. If only there were some cars here to use them. 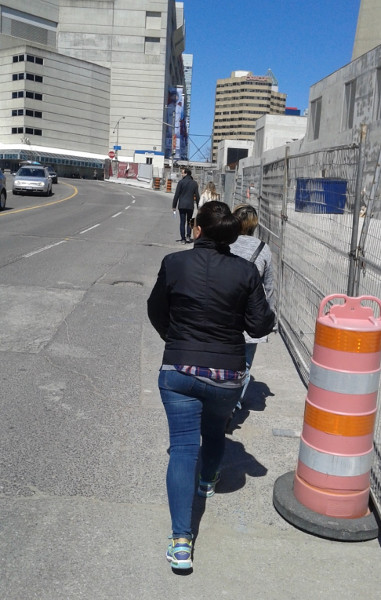 Rees north of Lakeshore - Lots of people and no cars. Let's just take out the sidewalk, then.

The road is mostly deserted so we forgo crossing over and glue ourselves to the chain-link fence. When we reach the stop sign at Bremner we are faced with more antsy traffic. After waiting our turn to cross, we head over the same time as an errant SUV. The driver is kind enough to slow down and pass behind our backs with six inches to spare.

As we look up at the Sky Dome I marvel at the fancy banners flapping in the wind. The Jays didn't win anything last year, or the year before, but it's nice to the see our sports teams showing some pride and flaunting their ambition. It all seems very un-Canadian, but it's about time: We need to win something! 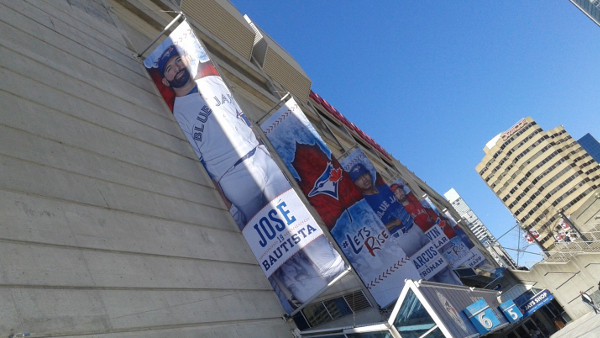 Go Jose! Maybe this year is the year?

I walk up to the statue of Ted Rogers and shake my head. I've frequented many a sports stadium over the years, mostly in the UK, and I can't recall any that reserves a prime spot for an owner.

Elland Road lets you kiss the feet of Mighty White legend Billy Bremner before you plonk yourself down in the Don Revie stand. St James Park celebrates the goal scoring prowess of inimitable Jackie Milburn - He took the bus to work! He smoked 20 a day! - With a rugged, action shot idol.

These men were true working-class heroes, sporting greats who forged a bond with their fans. Ted Rogers made a fortune and got a great deal on a sports stadium. What exactly am I worshiping here? 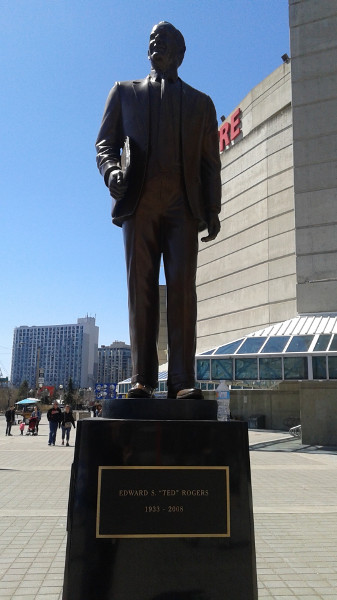 I say goodbye to Susie and Molly at the Aquarium (Hell, I'm not joining that line-up) and head back home. As I zigp-zag past the ACC and frogger through the Bay Street traffic, it occurs to me that Toronto's pedestrian realm is still very much a work in progress.

It's still a zoo out there, but at least the new condos and increase in foot traffic are forcing city planners to make adjustments. Queens Quay is a big improvement from my last photo-tour and the three streetscape options just presented for King Street between Bathurst and Sherbourne will give streetcars a dedicated lane which is great.

Update: the article originally asserted that the new tunnel to Billy Bishop Airport was taxpayer funded. That is not correct, and RTH regrets the error.

geez, I cover your town better than you.

TO definitely is making strides in the right direction. Visiting there from Hamilton feels like a galaxy further and further away as each year passes and your city makes more and more improvements, and Hamilton keeps pretending Main Street makes a city great. Enjoy, and great pics!