While he may try not to look too far into the future, it isn't difficult to see it will be sunny, as Spencer continues to learn and exercise his musical chops with a busy concert schedule.

Grimsby residents Lu and Dale Lenz share an appreciation for a variety of musical genres. Milling about with the crowd at the Grimsby Festival of Arts in 2016, admiring the cornucopia of artistic accomplishments, they found themselves drawn to a particular group of musicians. "We sat through their whole set, as did many others, and a very large audience gathered," says Lu. They were listening to Fort Erie's left-handed guitar sensation, Spencer MacKenzie and his blues band. 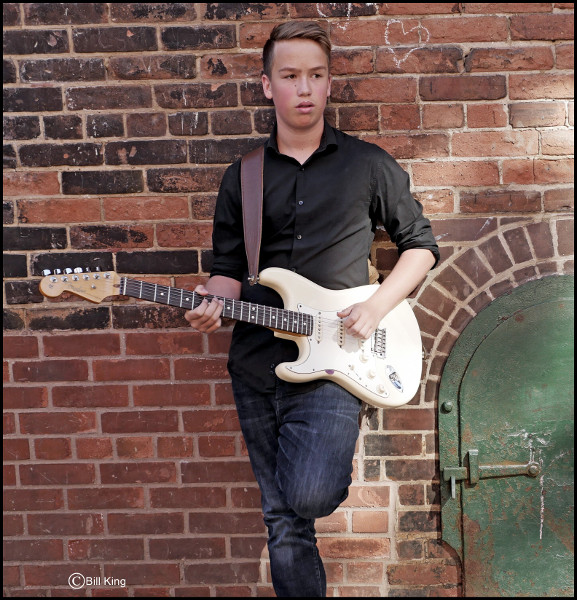 "We had just returned from a trip to New Orleans where we spent some happy times, especially in a bar called BB King's; the music was superb. Dale and I agreed that Spencer's talent met or surpassed some of the seasoned musicians we'd heard down south."

Afterwards, Lu and Dale lingered to meet Spencer and his band members. "They were thrilled we had taken the time to speak with them. They are remarkably gifted young musicians. I friended Spencer on Facebook so we could follow his adventures." Clearly the Lenzes know a good thing when they hear it.

Playing guitar seriously since he was eight years of age, Spencer MacKenzie proved himself to be one of Canada's best at the 2017 Maple Blues Awards, receiving the New Artist of the Year award on January 24 at Koerner Hall in Toronto.

Spencer gives a lot of credit for his success to his renowned mentor - Elton Lammie, a B.C.-born multi-instrumentalist who initially made a name for himself as a country music singer and then generated even more interest by winning the first season of a Canadian reality TV show called Bathroom Divas: So You Want to Be an Opera Star? in 2006.

"Spencer came to me for guitar lessons at age 14, after studying elsewhere for a few years," Lammie explains. "I noticed he had what we call in this field, 'great ears', which means he hears a lot of what is happening on the guitar in recordings. All he needed was to learn some vocabulary on the guitar to help him play what he was hearing."

Spencer can recall, from as early as age five, that his father played all sorts of music at home. But it wasn't until Lammie introduced him to a Stevie Ray Vaughan song that he was captivated by any particular genre. He realized that Stevie Ray Vaughan's music had been played, among that of other blues artists, ever since he could remember. Today, he also enjoys the music of blues greats like Ray Charles, Freddie King, and Muddy Waters.

According to Lammie, once Spencer heard a minor pentatonic scale, he was hooked. "I taught him not just to play these notes and scales, but to feel the notes, to breathe with them. He has always been one of those students that came back for a lesson better than he was the week before. It's because he listened to the teacher and practised daily at home. Spencer also listens to dozens of experienced musicians, both recorded and live. That's the formula for success."

In 2013, Spencer won the Rising Star award at the Niagara Music Awards. In the summer of 2015, in addition to playing at the Fort Erie Music Fest and Fort Erie Racetrack, among other gigs, Spencer wanted to branch out into new areas.

When he attended his first open-mic blues jam, he met Brant Parker who, with the Brant Parker Blues Band, has been performing in pubs, bars, and clubs in the Niagara region, and at festivals across Canada for several years. Parker subsequently introduced Spencer to many new stages in the Golden Horseshoe.

Spencer spent 2016 making a name for himself by performing for as many people as he could, at the Canal Bank Shuffle Blues Festival in Thorold, the BAC Squash Club in St. Catharines, the Bay City Music Hall in west Hamilton, the Cadillac Lounge in Toronto, the Kitchener Blues festival, and at the Wortley Roadhouse in London, Ontario, among others.

"Blues is a niche genre and Spencer is the 'new kid on the block'," adds Lammie. "Spencer is a young man with a gentle manner; it's no surprise his popularity is soaring."

With his father, Richard MacKenzie, Spencer has co-written a number of songs, and it was recently announced that together they have reached the Semi-Finals in the 2016 International Songwriting Competition, an annual contest out of Nashville, Tennessee. It provides an opportunity for aspiring and established songwriters alike to have their songs heard in a professional, international arena.

"Infected With The Blues", the title track from Spencer's debut CD released last year, earned rave reviews and international airplay with 16 consecutive weeks on the 'Top 50 Roots Music Report' Blues Charts in Canada. By the end of this year, he plans to release his second album.

On April 1, Spencer is excited to be a special guest playing with blues guitar legend Jack de Keyzer at the Seneca Queen Theatre in Niagara Falls.

Meanwhile, sure that east Hamilton would welcome his talent, too, Dale and Lu Lenz persuaded Spencer to appear at a fundraising concert for Delta United Church on April 30.

While he may try not to look too far into the future, it isn't difficult to see it will be sunny, as Spencer continues to learn and exercise his musical chops with a busy concert schedule across southern Ontario.