Dual-language story books can contribute to introducing children to print literacy, bilingualism, and multilingualism, and serve as a bridge to literacy engagement, literacy achievement, and critical understanding.

The dual-language book collection at the Hamilton Public Library is diverse and impressive. But it can also be searched electronically.

You can visit the library's website and search the catalogue by subject. For example, if you are interested in Chinese-English dual-language books, then you can click on "catalogue", then click on "keyword" and select "subject". Then type, "Chinese language materials - bilingual" in the search box. 1

This search provides information about a list of Chinese-English dual-language books in the library collection, such as 給保羅的禮物 / A Present For Paul, written by Bernard Ashley and David Mitchell. 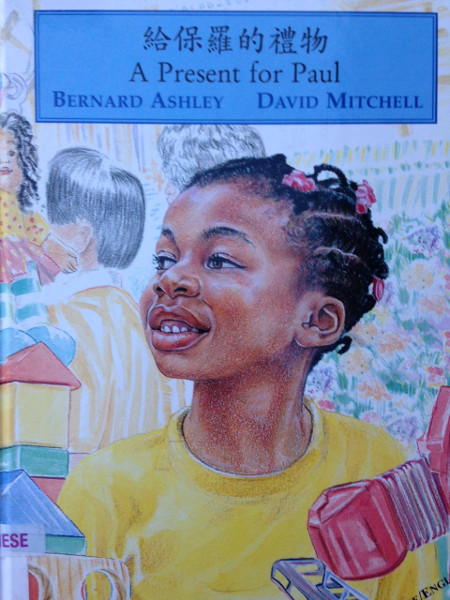 This Chinese-English book tells a story about a student named Pleasure, who goes to a market with her father in order to buy vegetables and a gift for the family's baby brother, named Paul. Nevertheless, while looking for the perfect gift, she loses sight of her father and worries he had disappeared.

But finally the daughter and father are reunited, and the father asks, "你迷失前有没有找到禮物給保羅?" "Did you choose a present for Paul before you lost sight of me?"

Dual-language storybooks for children are similar to traditional children's literature. They both feature creative narratives and vivid imagery, but dual-language books typically include two languages on nearly every page. In such a book, every sentence of the story is represented in both languages.

In contrast to monolingual representations of narrative, in which an entire story uses only English or only French for example, a dual-language story book can represent narrative in two languages, such as Ojibway and English, or Arabic and French.

As a result, dual-language story books can contribute to introducing children to print literacy, bilingualism, and multilingualism, and serve as a bridge to literacy engagement, literacy achievement, and critical understanding.

The dual-language books at the Hamilton Public Library include a great array of languages from around the world and Hamilton. One recent addition is Tomson Highway's atíhko níkamon / Caribou Song, an impressive dual-language story told in Cree and English.

With brilliant illustrations by Brian Deines, this story is about two siblings, Joe and Cody, who love to dance and play music, which leads to a spectacular, mystical adventure. 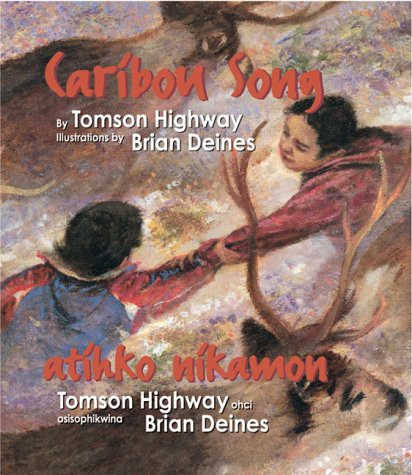 An example of an Arabic-English dual-language book is الحجاب الملفوف / The Swirling Hijaab. Created by Robert Na'ima bint, this book is about the fascinating world of a young student who plays with her mother's hijaab. 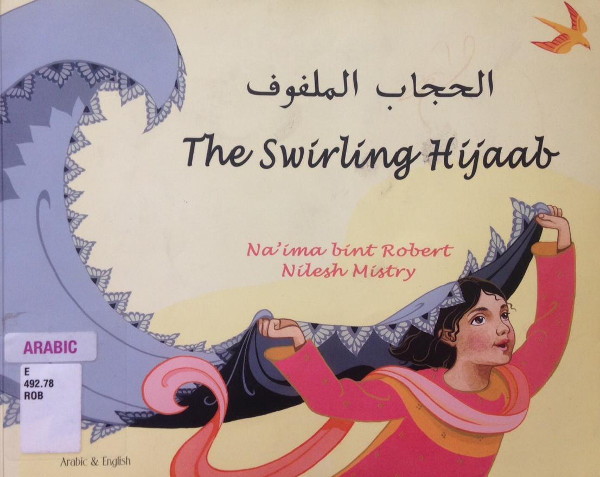 The Hamilton Public Library also has English-Spanish dual-language books, such as That's Not fair! Emma Tenayuca's Struggles For Justice / ¡No Es Justo! : La Lucha De Emma Tenayuca Por La Justicia. This story, written by Carmen Tafolla and Sharyll Teneyuca, is based on the real life of Emma Tenayuca, a remarkable young woman who led 12000 pecan sheller workers in a historic strike for fair wages and improved work conditions. 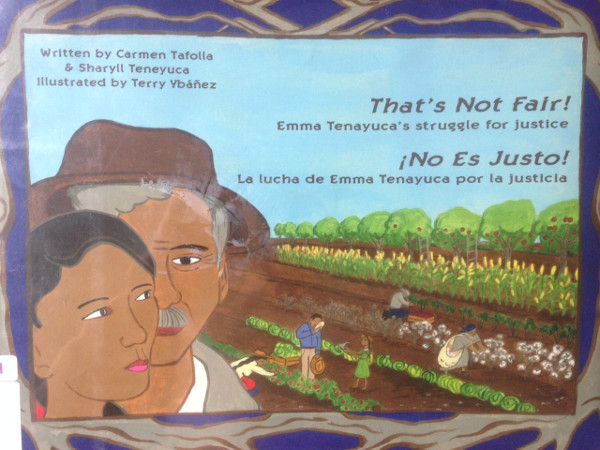 Furthermore, the libraries in Hamilton also have these books written in English and French, such as What Is Peace? / Qu'est-ce Que La Paix? by Emma Damon, and translated by Annie Arnold. While providing an inspiring array of ideas about peace, this book is in fact a lift-the-flap publication and also includes instructions for making a Peace Crane. 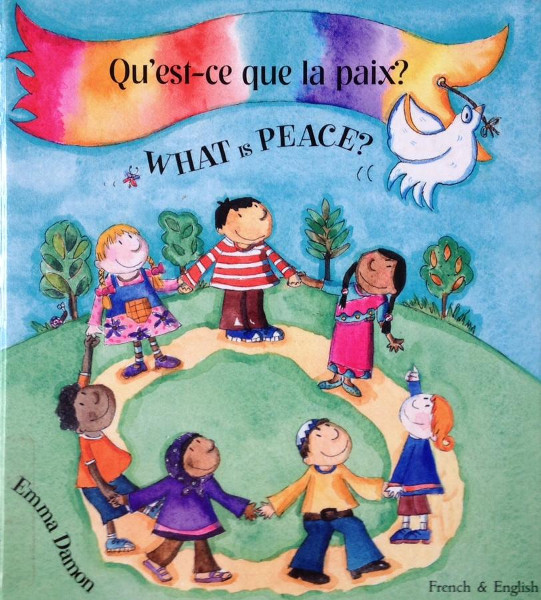 Many of these stories pertain to ethical issues, such as caring about others, respecting diversity and multiculturalism, identifying oppression, or demanding social justice.

In Ontario, failures to respect linguistic diversity and education rights are numerous and striking. As documented by sources such as the Truth and Reconciliation Commission, the Indian Residential School system that Indigenous children were forced to attend, while removing youth away from their families and subjecting them to multiple abuses, also strictly prohibited the children's Indigenous languages. 2

Another example from Ontario pertains to the French language. In 1912, the Conservative government passed Regulation 17 which banned French as a language of instruction in Ontario classrooms for students in middle school and higher grades, despite large Francophone communities living in Ontario. The government stopped enforcing the ban in 1927, and it was repealed in 1944, but French-language high schools were not officially recognized until 1968. 3, 4

Linguists such as Dr. Tove Skutnabb-Kangas have suggested that prohibiting student use of their first languages and home languages may amount to genocide in schools. 5 As defined by the 1948 UN International Convention on the Prevention and Punishment of the Crime of Genocide, genocide involves "forcibly transferring the children of the group to another group" or "causing serious bodily or mental harm to members of the group." 6

While research shows that bilingualism and multilingualism have direct advantages for people and communities, studies also show that the inclusion of students' first languages in bilingual education supports academic achievement. For example, in a widely-cited quantitative study published over two decades ago, researchers Dr. Virginia P. Collier from George Mason University showed that students who participate in additive bilingual programs tend to achieve greater school success than students submerged in monolingual programs. 7, 8

More recently, in a qualitative study, researchers from the University of Toronto - Dr. Jim Cummins and Dr. Saskia Stille - demonstrated how including the diverse home languages of students in their education can support scaffolding language, literacy, and identity formation, while also developing new forms of social participation. "Language teaching," as described by these authors, "can draw on the full range of students' cultural, linguistic, and representational skills and abilities as a foundation for learning, and as a means to promote new forms of participation in the contemporary linguistic landscape." 9

In addition to a diverse collection of paperback fiction and non-fiction, newspapers, magazines, large print books, music CDs, film on DVD and Blue Ray technology, and so on, the library also offers a wide array of services, such as house call accessibility services, and programs, such as storytime sessions for young children. 12, 13

The Hamilton Public Library is among the oldest public libraries in Ontario. In 1889, citizens voted to fund the construction of a free public library, which opened in September 1890. 14

Or you can browse the shelves of the libraries for dual-language books, many of which are stored at the Red Hill branch, located at Nash and Queenston, or the Central branch, located on York in the city centre. 15 The Central branch is located on the proposed B-Line Light Rail Transit (LRT) route, which may be completed in 2023/24, and the Red Hill branch is at the LRT Nash stop proposed for Phase II Development. 16

Dual-language storybooks can also be found online. The Multi Literacy Project based in Toronto, for example, has shared some of the inspiring dual-language flip books created by its students. At a website of this project, you can find online dual-language books about pirates, feasting, polar bears, friends, and gardens. 17

At another website of this project are links to more online dual-language texts, such as The New Country, 18 which is also discussed in detail Dr. Jim Cummins and Dr. Margaret Early's 2015 publication called Big Ideas for Expanding Minds. 19 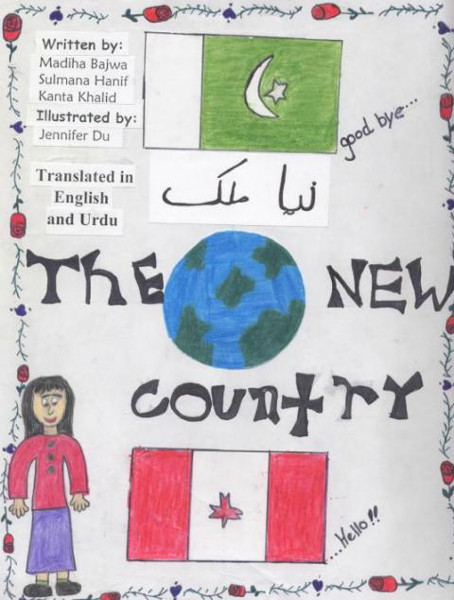 Moreover, these dual-language storybooks that can be found at the libraries and online can also provide bridges for students and children making their own dual-language books and stories. In other words, literacy is not only about reading print. Children and youth, as much as adults, are creative and can make their stories.

With widespread challenges in the world, such as climate crisis, vicious xenophobia, and ongoing war, it is a wonder what will be the stories told by the children of the future.

2. TRC. Canada, Aboriginal Peoples, and Residential Schools: They Came for the Children. http://www.myrobust.com/websites/trcinstitution/File/2039_T&R_eng_web%5B1%5D.pdf

4. Kitts, D. (2016, Feb. 25). Why Ontario once tried to ban French in schools. http://tvo.org/article/current-affairs/shared-values/why-ontario-once-tried-to-ban-french-in-schools

6. UN General Assembly. (1948). Convention on the Prevention and Punishment of the Crime of Genocide. https://treaties.un.org/doc/publication/unts/volume%2078/volume-78-i-1021-english.pdf

8. Collier, V. & Thomas, W. (2004). "The Astounding Effectiveness of Dual Language Education For All" in NABE Journal of Research and Practice. http://hillcrest.wacoisd.org/UserFiles/Servers/Server_345/File/Publications/ELL/Dual%20language%20survey.pdf

16. RTH Staff. (2016, May 20). "Answers to All Your Light Rail Transit Questions" in Raise the Hammer https://raisethehammer.org/article/2974/answers_to_all_your_light_rail_transit_questions