This is an encouraging sign that staff increasingly regard the city as a work in constant progress, susceptible to continuous incremental improvements. 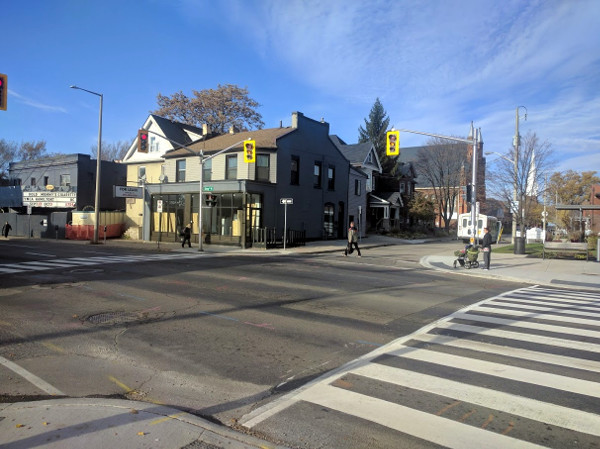 Five years ago, the City of Hamilton began a modest but important complete streets improvement for people walking and biking north and south between Strathcona and Kirkendall neighbourhoods: specifically, a signalized crosswalk was installed on King Street at Pearl Street North. In 2013, a signalized crosswalk was also installed on Main Street at Pearl.

Prior to these crosswalk installations, there was a 400 metre distance between the nearest signalized intersections, at Locke Street and Queen Street. For an urban, residential neighbourhood, that was a very long distance with no safe places for pedestrians to cross the street.

Then, in late 2014, a new pedestrian bridge opened on Pearl across the CP train tracks that run below grade through Kirkendall Neighbourhood. 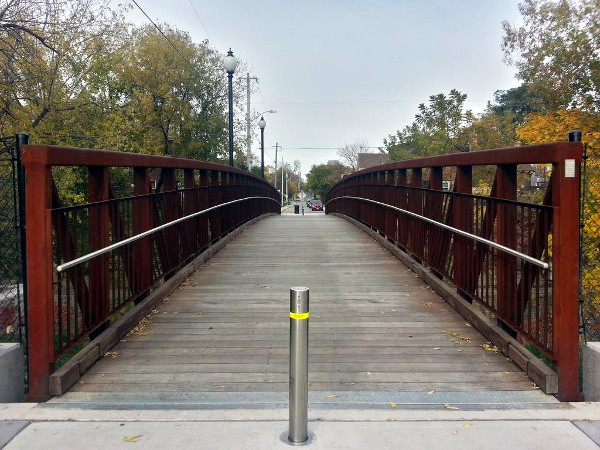 Getting these crosswalks installed was an important achievement for the Strathcona and Kirkendall Neighbourhood Associations and for former Ward 1 Councillor Brian McHattie.

Unfortunately, the actual crosswalk design was less than ideal: pedestrians on Pearl were only allowed to cross King on the east side of the intersection. The west side got a new sign prohibiting pedestrians from crossing on that side! 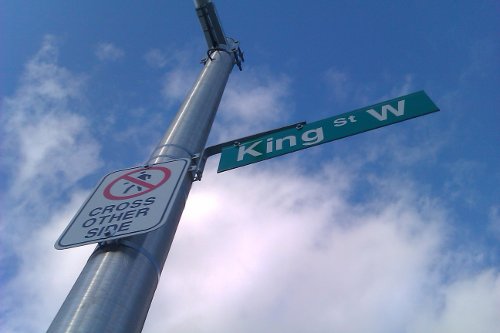 This was frustrating, because it meant anyone approaching the intersction from the west would have to cross Pearl first, then cross King. And of course, the intersection at Main and Pearl only has a legal crosswalk on the west side, so the law-abiding pedestrian would need to return to the west side of Pearl before crossing Main.

The good news is that with the fully signalized intersection on King, pedestrians can legally cross King on either the east or west side of Pearl. 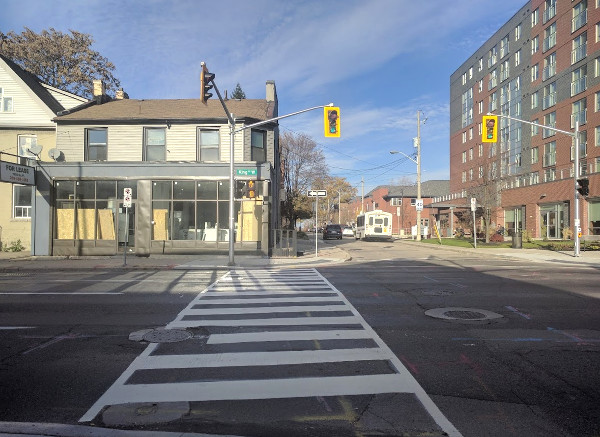 New zebra crosswalk on the west side of Pearl at King

I realize it may seem odd to write in celebration of a city street that merely allows people to cross the street from either side. However, this is significant because it indicates the City is willing to revisit some of the earlier two-steps-forward-one-step-back projects that almost got it right.

With more experience designing pedestrian improvements and a culture that has shifted further in the direction of complete, inclusive streets that accommodate everyone, this is an encouraging sign that staff increasingly regard the city as a work in constant progress, susceptible to continuous incremental improvements.

A great city is not just the product of a few big decisions. To be great at the human level, where individual people interact with their environment on a daily basis, a city must be made up of a very large number of small decisions executed well.

From that perspective, every small city interface improvement is something to note and celebrate.

Pearl is an important pedestrian backbone through two neighbourhoods. Anyone in the area should be keeping a close eye on LRT planning, as Pearl was not included as a pedestrian crossing in the last round of plans.

Good point. As a rule of thumb, it should be easy to cross the LRT corridor.

While any able-bodied person can easily jaywalk across a non-fenced LRT corridor much like today's TTC Spadina or St. Clair corridor -- we need sufficient pedestrian crossings especially for the mobility-impaired. While crossing an LRT corridor (away from official crossings) entails increased risk on a pedestrian who decides to do such -- the LRVs do stop as fast as an articulated bus.

People already jaywalk a much-more-dangerous Main/King corridor today, and there will be a vehicle on a track only once every 4 minutes, rather than continuous surges of cars. On average, the risk will be lower, as much as the NOLRT people claims "LRVs are super dangerous" without comparing with today's dangerous traffic on Main/King...