Traffic lights have been installed and await inspection for a new signalized pedestrian crosswalk on Main Street at Pearl Street. 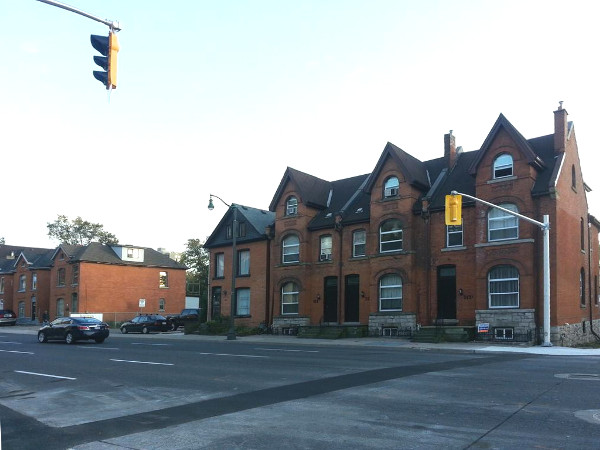 The traffic lights have not yet been activated. According to David Ferguson, the city's new Superintendent of Traffic Engineering, the city needs to wait until the lights have been inspected by an electrician before activating them.

Once operational, the traffic lights will be on a schedule, synchronized with the 'green wave' on Main Street.

This pedestrian crossing parallels a similar crossing on King Street at Pearl that was installed in 2011 and helps establish a north-south active transportation route between the north end of Strathcona and the radial trail at the south end of Kirkendall.

Jason Leach has proposed making this north-south route a neighbourhood greenway - a residential street where cyclists and pedestrians are given priority above cars.

Neighbourhood greenways are marked with signage, bicycle stencils and sharrows, while speed bumps and diverters are used to discourage cut-through driving while encouraging walking and cycling.

A neighbourhood greenway could start on Magill Street at Barton and progress south to York Boulevard. Crossing York, it could continue on Pearl Street, take advantage of the new crossings at King and Main and continue south on Pearl to the HAAA Park.

Eventually, when a pedestrian walkway is built connecting the north end of Strathcona neighbourhood to the waterfront trail (a project that has been in the works for years), the Magill/Pearl/Kent greenway could directly and continuously connect the Radial Trail to the Waterfront Trail.

The greenway strategy makes complete sense. A north-south greenway would connect the Radial trail to the feeder neighbourhoods, reinforce community health and provide an additional feeder system for planned and existing transit lanes going east-west. How long before a bridge to the waterfront? With discretionary funds allocated to this project I assume that could take 10+ years unless the City realizes how dedicated the ward is to that infrastructure and just goes ahead and builds it. Creating a greenway will strengthen the demand for that access point to the waterfront.

I love between King and Main, on Pearl. What a wonderful enhancement to connecting those walking into Victoria Park and around the area of Locke St. I don't live on an island anymore! Thank you Hamilton!