Hamilton's Vision Zero Survey that Only Drivers can Complete

One method of distorting a survey's results is called Sampling Bias. This happens when the survey sample under-represents parts of the population being surveyed.

In its most extreme form, a survey with sample bias will entirely exclude significant parts of the population being surveyed. This can lead to profoundly misleading results.

To quote from the above Wikipedia link, "For example, a study to 'prove' that smoking does not affect fitness might recruit at the local fitness centre, but advertise for smokers during the advanced aerobics class, and for non-smokers during the weight loss sessions."

Another extreme example of sample bias is Hamilton's current "Vision Zero" survey, which can only be completed by drivers.

The problem is with question #5: "How fast do you usually drive?" The response options are:

I presume that everyone else who is not a car driver did the same as me, trying to move on and complete the survey as none of the response options were applicable.

But the survey cannot be submitted without that question being answered, and none of the options can be chosen by someone who is not a driver.

Please see the screenshot below. People who are pedestrians, cyclists or public transit users cannot complete this survey because the form validation will not accept it. 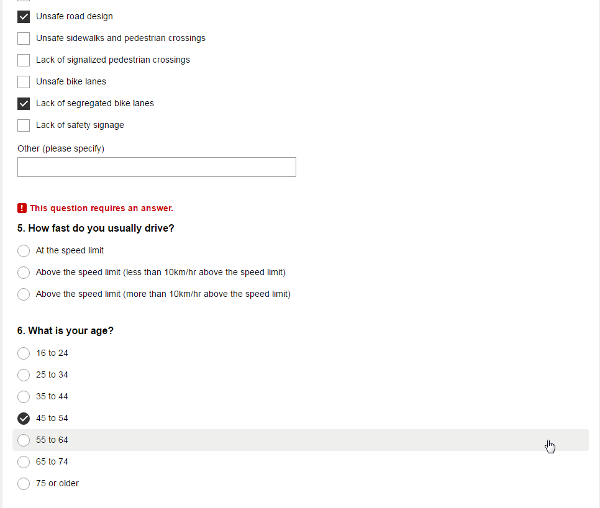 'This question requires an answer'

You drive a bicycle. And as I gather, you are an advocate for everyday cycling, you typically travel at a speed which is less than the posted speed limit.

And of course, there isn't even an option for those who typically drive below the speed limit. It is automatically assumed here, just as it is in our popular culture, that the speed limit is supposed to be treated as a minimum speed, not as maximum. This completely works against all of the 'Vision Zero", road safety programs and basic respect for the law of the land.

Until we're ready to confront the fact that excessive and dangerous speeding is a cultural norm, we will never achieve even modest reductions in the number of deaths and injuries on our roads. Maybe it's time to apply a zero tolerance policy on automobile speeds. Drive 41 kph in a 40 zone, you get a ticket. Hopefully the return of photo radar makes this a reality.

It is very strange that, even if the survey designers were only thinking of drivers, there is no option for drivers who usually drive below the speed limit. Surely there are some drivers that try to stay under the speed limit!

"The City of Hamilton is exploring Vision Zero to determine whether it’s feasible to implement the approach on Hamilton’s roadways... Your thoughts and opinions will assist in gaining understanding of how residents perceive the current state of road safety and issues in Hamilton."

The wording around the link to the survey makes it clear that this is a political issue. They really should have just asked one question: Is getting where you are going as fast as possible in a car more important to you than the lives of people who are killed on our roads every year? This is only meant as a reference for council on the political ramifications of making changes to our road network. It has nothing to do with actually identifying problems with our roads.

I see that the survey has now been edited to include the option "I don't drive a car." Still no option for going below or up to the speed limit though.