Eyes on the Street: Permanent Bumpout Completed at Locke and Herkimer

This is the successful end of a long and hard fight for a safer intersection.

Good news! The bump-out at Herkimer and Locke that was under construction last weekis now complete. 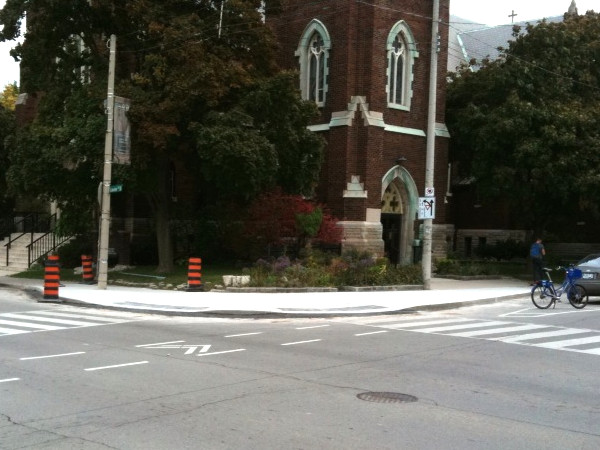 Completed bumpout at Herkimer and Locke

This is the successful end of a long and hard fight for a safer intersection. This struggle has been extensively documented on Raise the Hammer.

The inner infrastructure standards guy in me notes that this would be even better with a "floating" safety island with the bike lane going through it, as is common in The Netherlands. This would be most important for people turning left onto Herkimer from Locke Street, as they would have that concrete island between themselves and motor vehicle traffic.

But, as the saying goes, the perfect is the enemy of the good. Compared to what we had before, this new intersection is very good!

While I agree that perfect should not be the enemy of good -- does any one else find it unacceptable that a brand new concrete pour must be immediately patched with asphalt to make it safe and accessible?

Since they can only cut asphalt in straight lines there were bound to be gaps between the concrete and the road. They also need room for the mold. Too bad they couldn't smooth the patch out a bit more though. Looks like they bought bags from home depot and flattened it with shovels.

I appreciate that gaps need filled, but it looks more like ramps to cover the fact they would have an unacceptable lip that people would trip on and wheelchairs could not cross without assistance.

was wondering the same thing. How hard is it to ramp the concrete right to road level?