The city that turned down Provincial LRT funding has delayed any possible rapid transit by several years - and still has no guarantee of funding.

In the 15 months since the Province confirmed full capital funding for Hamilton's light rail transit (LRT) line, a small, fragmentary, reactionary anti-LRT group has coalesced around a retail business on King Street West. 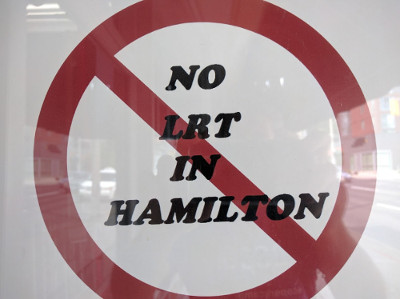 This anti-LRT campaign has been characterized mainly by boorish posturing (multiple unsolicited spam emails to other business owners and illegal posters that are almost immediately torn down), truly shameless fearmongering (including an outrageous attempt to compare LRT with the Lac-Megantic heavy rail disaster) and of course a ridiculous barrage of blatant misinformation.

One of the more pernicious anti-LRT dodges is the false claim that if City Council changes its mind and rejects LRT, Hamilton will be allowed to spend the confirmed $1 billion capital funding on something else instead.

Let's be absolutely clear about this: no, we won't. The Province has clearly stated that if Council rejects the LRT plan, the $1 billion will be released back into the Metrolinx GTHA Rapid Transit fund to be spent on the next priority projects awaiting funding.

Unlike the Hamilton LRT plan, which was identified in the Metrolinx Regional Transportation Plan as a top priority, a different plan would have to be evaluated against the Province's regional transportation mandate to see if it even fits. It would not be a top priority like the current plan.

And that's not even to mention the fact that the Province would likely be very reluctant to stick their necks out with another funding commitment after we strung them along for nearly a decade, only to turn down their offer to fund the project we had repeatedly asked them to commit to!

The lastest iteration of this false claim is the suggestion that Brampton can just submit a new rapid transit plan after that city's Council voted to turn down Provincial funding to extend the Hurontario-Main LRT into downtown Brampton.

According to an email obtained by RTH from Chris Duyvestyn, Director of Transportation Special Projects in the Planning and Infrastructure Services Department at the City of Brampton, it will take three years to complete an Environmental Assessment (EA) study to compare the two alternate LRT routes still under consideration.

The [Brampton LRT line] will stretch from the Gateway Terminal at Steeles Avenue and Hurontario Street to the Brampton GO station in Downtown Brampton. Brampton Council recently approved the preparation of a Terms of Reference to undertake an environmental assessment (EA) study to assess two alternative LRT routes (Kennedy Rd and McLaughlin Rd). This is expected to take approximately three years to complete once a consultant is retained.

Upon completion and approval of the EA study, and subject to future funding from the Provincial and/or Federal governments, the City will be in a position to proceed with the design and construction of a preferred route endorsed by Council. [emphasis added]

So it will be at least three years before Brampton can even submit a request for funding for an alternate LRT line, and there is no guarantee or promise that funding will be approved. As The Toronto Star reported:

Brampton can't count on hanging on to the money that the province had allocated as its share of the Hurontario-Main LRT, says Transportation Minister Steven Del Duca.

"It is disappointing," he told reporters at a conference on Tuesday of that city's decision not to accept the province's offer of an LRT that would run down Main St. to the Brampton GO station.

The money will be reinvested in transportation infrastructure, said Del Duca. But where it goes depends on an analysis of priority transit projects by provincial transportation agency Metrolinx.

"We will proceed with the plan to build the LRT from the Port Credit GO station to Steeles and the balance of the funding in question will flow back into the (province's) Moving Ontario Forward plan to be invested in priority transit projects in the region, which in theory could be a project or more than one project in Brampton but is not necessarily going to be Brampton," he said.

Another email obtained by RTH from Mr. Duyvestyn notes that the EA study will have to be funded by the City of Brampton.

Recall that the City of Hamilton received $3 million from the Province to complete its EA study on the B-Line LRT plan. It is not likely that we would receive more money to do a different EA study after rejecting funding for the plan we developed with the previous EA study money.

And in case the anti-LRT folks try to claim that it's possible to get funding without completing an EA, Mr. Duyvestyn writes:

In the past, a completed EA study has been required before the Federal and Provincial governments will consider any funding requests for construction. The completion of an EA study will allow the City to be ready should there be external funding available in the future.

The earliest they can submit their new plan for funding consideration is after the next provincial election, and it's just not possible to predict what the political or financial context will be in 2019 or 2020.

So let's please stop pointing to Brampton as an example of a City that managed to cut off its nose without spiting its face.

They turned down their LRT funding and as a result have delayed the possible construction of an alternate LRT system by at least several years, with no guarantee that they will get funding for their Plan B.

Be posted no earlier than 21 days before the event and removed within three days after the event - Must have a specific date or be re: specific event, then removed. Like Tell Council to VOTE NO to LRT on Oct 25th, then they must be removed by Oct 28th

They have also be violating by placing NO LRT posters on Utility pole on any median, traffic island or central boulevard and Traffic signal or traffic control device

Those are the bylaw requirements for posters in this city.

Ironic then coming from a Premier who most definitely doesn't "have her shit together." Really though; that's quite a leap. Instead I take her at her word: it was never LRT or nothing. I'm not going to ascribe thoughts subtext to the Premier's words. Everyone has the right to be taken at face value. Do you think the Premier has no agency and is unable to say what she means? She's the bloody Premier of the Province of Ontario. And you think she's beating around the bush? There's something faintly sexist about your claim.

Sound bites are cute. Did she say, "You can use this billion for any plan you come up with now?". Clearly she didn't. We were awarded 1 billion for the plan we see today. As this article shows clearly, saying no to the LRT plan we have developed over 8 years will put us back to the EA phase (that we'd pay for this time) for 3 years, then approval over a year (?), so we'd be ready to be back to where we were last year in May 2015 but it would be 2021 or so. Just in time for some campaign promises for the 2022 election and still subject to approval.

To be fair, "LRT or nothing" is such a simplistic term. It requires a new application & will require a new timeline that bumps things further out. In addition, Metrolinx historically funds other municipalities' large bus initiatives by a much smaller amount than LRT initiatives.

The article is simply pointing out that a re-planned LRT (taking Main route, for example) would be bumped out many years into the future, since Hamilton will have to take a fresher funds (even if same $1 billion) as the original $1 billion will go back to the Moving-Ontario-Forward fund, to fund a different part of the "Big Move" sooner while we spent time re-planning our LRT. We can't re-plan our LRT fast enough while "keeping our place" in the Big Move schedule. Doing it Brampton's way may end up being the difference between your kids getting to McMaster by LRT, versus grandkids getting to McMaster by LRT.

On other semi-related topics:

Personally, myself, I indeed feel the King LRT needs to be built without delay, extensions should begin (Eastgate) immediately afterwards, the bus garage is a good investment (Hamilton's $150M Garage Mahal actually is bigger than VIVA's new bus barn and cheaper-per-bus) while not delaying LRT.

Yes, I was originally surprised how expensive Hamilton's bus barn was, but the new slightly-reduced $150M estimate now makes it cheaper per-bus than VIVA's bus barn and the Metrolinx Waterdown go bus barn -- given it's also maintenance, indoors for 300 large buses, is even bigger than VIVA's 250-bus barn that cost similar, and also complete full maintenance facilities, not just storage. The current facilities won't support a doubling of Hamilton bus service set out in the 10-year Rapid Ready plan.

Hamilton has built up a huge transit deficit, and need an anchor high-order mass transit network to begin, pronto -- alongside with a major bus expansion that could be help kickstarted by the new $150M bus barn (with the $36M spending deadline of spring 2018 (federally mandated deadline) to indirectly help accelerate the 10-Year Rapid Ready along.

I expect the 10-Year Rapid Ready plan to pick up pace simultaneously with LRT.

The LRT will terminate at the single largest commute in Hamilton (McMaster). That is not a waste. You want business to thrive. Feed your university. LRT will definitely help people get to work on time. Not those people who have chosen to live the car life in freeway fed suburbs, but we have built major highways to support them. The project will be completed within 10 years, and should be running for more than a year by that time. So the LRT is coming. We can have wonderful roundabouts and bicycle infrastructure and improved highways as well. I will be 60 years old when the LRT starts running. I will be (maybe;) 80 when the infill is done. Long term plans by long forgotten councilors are vitally important for cities to grow.

This is a good point. People sometimes forget that McMaster is a huge commuting destination, by far the largest in the city: over 30,000 students and 7,000 employees. And the stop before McMaster services Westdale High School (1800 students) as well as the Innovation Park (? probably around 100 or more) and CanMet Lab (over 100 employees). Downtown is another big employment hub (over 25,000) which also generates a lot of shopping and entertainment trips.

Reaching 64,000 commuters in three stops is not bad!