Cappucino Planning and the Face of Public Space

We need to ensure that our public spaces are conducive and welcoming to the greatest number of citizens from across the demographic and economic spectrum.

Since about mid-June, I've been dragging my kids out regularly to cycle the bike trail along Lake Ontario, from Grays Road in Stoney Creek to the lift bridge in Hamilton. It's a little more than an eight kilometre journey each way. 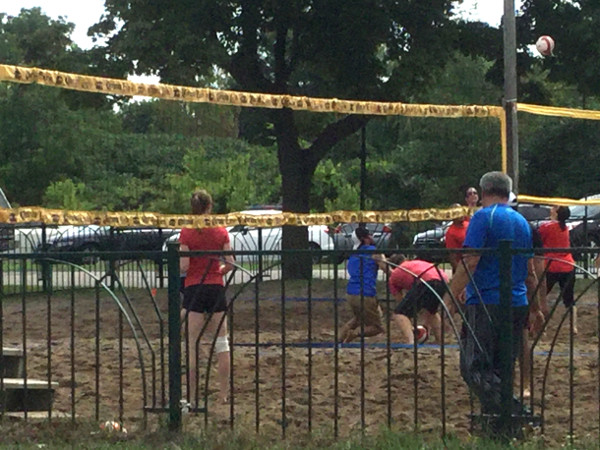 During these rides, I've kept a close watch of the people using the public and private space alongside the waterfront and on the bike trail itself. Here are my unscientific observations. 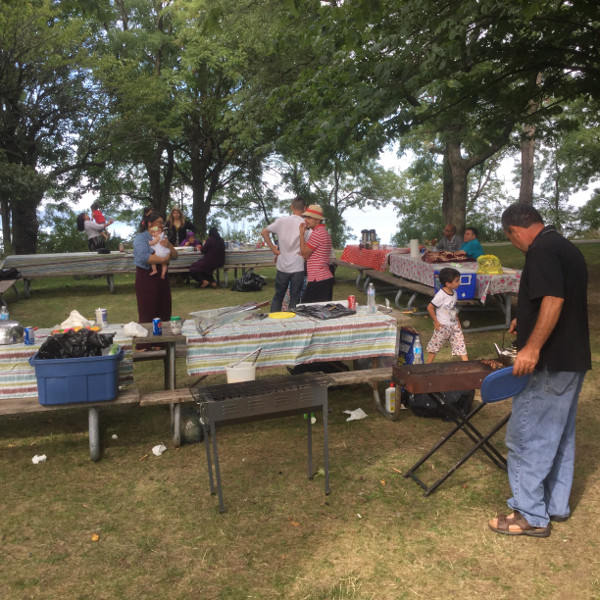 This family comes from the region of Kurdistan. 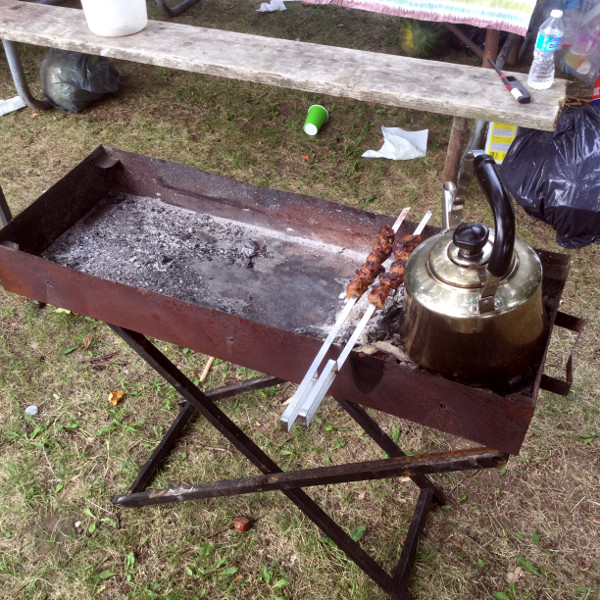 The family from Kurdistan is cooking barbecued skewers.

First, 80 percent of the folks using the public spaces are visible minorities. Of this 80 percent, three-quarters gather in large groups in the form of multi-generational families, friends, or a little bit of both. 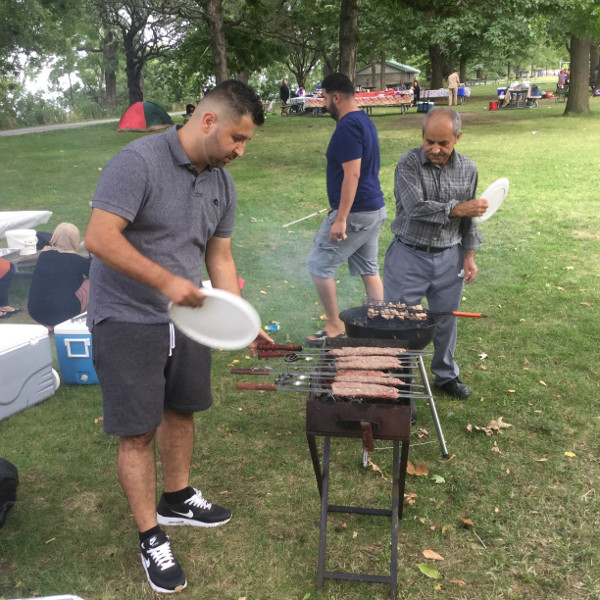 This family was originally from Tajikistan and made their way to Canada via Greece and then Quebec, and now reside on Hamilton Mountain. The gentleman is barbecuing kebabs. The women were nearby on the ground preparing the meat.

It would appear that they make extended use of the space. They are there for a good time and a long time. Picnic tables are grouped together, there are things to cook on and elaborate things to drink from, and there are a lot of happy, active children. 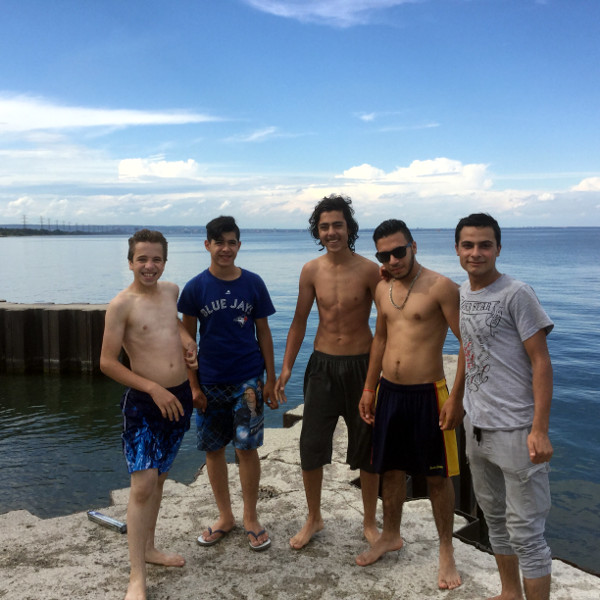 These boys are from Syria and arrived in Canada 6 to 8 months ago. They were east of Barangas having a wonderful time jumping off and into the water.

Interestingly, very few visible minorities seem to be making use of the bike trail.

When we consider the private spaces along the same route, the experience seems to be the opposite. On this stretch of waterfront there are two privately owned and operated restaurants. Barangas on the Beach enjoys a spacious outdoor deck. Further down the trail, Hutch's serves up fast food and ice cream. 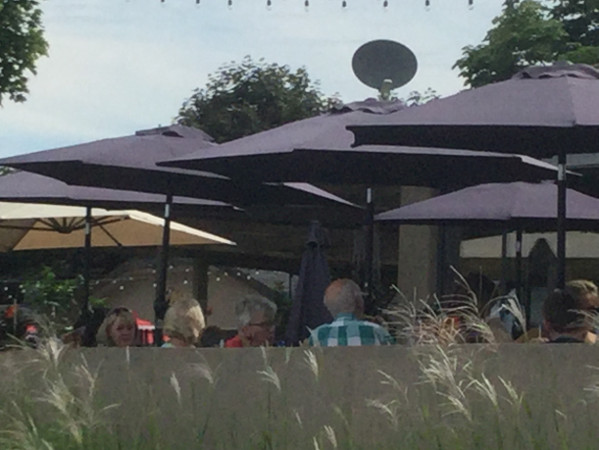 Barangas on the Beach patio 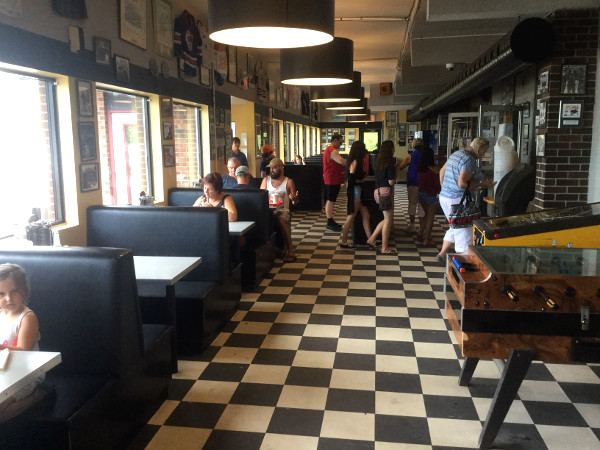 At least 80 percent of the people in these spaces are not visible minorities.

Why might this be the case? I don't know for sure, but here are at least three possibilities:

Why might this matter? It matters because increasingly, our plans for public space involve places of private consumption.

Public boardwalks dotted with cafes, art galleries, restaurants are being touted as great public spaces when in reality the amount of actual space that is public is relatively small compared to the space being put aside for private enterprise.

But there's a hiccup. Consumption is guided by taste and price. What we consume is often influenced by what we can afford and who has the economic means to produce and sell it. In other words, "tastes reinforce social distinctions," as Sharon Zukin put it in her book Naked City: The Death and Life of Authentic Urban Places.

Good public policy and planning requires that we focus on access and equity first. We need to ensure that our public spaces are conducive and welcoming to the greatest number of citizens from across the demographic and economic spectrum.

As Hamilton enters an era of rebuild, including the redevelopment of its waterfront, this is something to keep in mind.

It is even worse when private sector "partners" turn around and try to take from the public what is supposed to be public space.

Great, important perspective. Thanks for sharing!

Correct me if I'm wrong, but this is exactly what we've done in Hamilton. In fact, almost the entirety of our waterfront public lands both along this beach trail and West Harbour are open and accessible to everyone. We spent a day last week BBQ'ing at this exact spot in Confederation Park and absolutely love it there. We also noticed the cultural differences among families from other nations in their communal eating/picnicking together compared with many of us born here in Canada. It was mostly visible minorities when we've been there too.

But as was mentioned, there are only 2 private eateries along this entire 8km stretch. I would love to see more opportunities to sit at a cafe patio or restaurant patio overlooking the lake.
With our massive swaths of public parkland already established here and along the West Harbour, I think we've got a great opportunity to add some 'consumption' amenities in order to more easily draw everyone to these beautiful spots, not just those who enjoy grass and picnics. I personally enjoy both and hope to see a better balance established in the years ahead as we add some tasteful commercial space to these waterfronts.

The points in the article are exactly correct. Pier IV is a perfect example of the conflict. The park was designed largely by a consortium of neighbours working with City Staff. The design was for a family style neighbourhood park. A central field for children to play, comfortable places for parents to watch their children at play, space to fish and wander in the water and many spots for family picnics. In the last five years it is regularly full of people who's eating and dress indicate immigrant status. It works superbly for that purpose. Unfortunately, the City parks staff, without notice to the neighbourhood converted its label to that of City-Wide park and the anonymous team deep in City Hall that decides on park use regularly now assigns the park to major events that for all practical purposes commandeer the whole park and chase families away. The irony is that Bayfront Park, two blocks away was designed as an event park and regularly sits empty while Pier IV is leased to events. The same is likely to happen at the new trail extensions that end at Pier 8. Family space is simply not popular among our planners.

had a poor experience Monday while attempting to take our niece for her first ever hike to Dundas Peak. We pulled in to the almost empty lot and were greeted by a friendly staffer who informed us it would cost $35 to park. We said we were just walking to the peak and she was very apologetic in acknowledging that it's a steep price for most folks. We of course, left.

So, we've got publicly owned nature land that has now been hijacked and basically made to be a private nature amenity for the rich folks who built homes across the street and then started whining about everyone from the city visiting the beautiful waterfalls. Yes, 99.9% of us can't afford to build a giant home in rural Flamborough.

Very worrying to see a public institution like the Hamilton Conservation Authority allow this small group of folks to take over a beautiful spot like this for their own use. $35 is nothing for them to pay for a nature walk.
It should be noted, this was a Monday afternoon with 3 other cars in the lot....2 of which I presume were for the 2 staff. Based on the kind and apologetic nature of this staff member, we clearly weren't the first ones to express disappointment at this new structure. City Hall needs to hold the HCA accountable, or threaten to shut off the public money tap they enjoy.

This is a nice analysis, based on personal observations, of how different people are using parks along the waterfront. It is nice to see recent arrivals already enjoying the beautiful waterfront space Hamilton has to offer. I've noticed the same thing at HAAA, with (apparently) recent immigrants getting together regularly to play soccer.

I have to agree with Jason, however, that providing expanses of grass, walking paths and playgrounds is already Hamilton's main focus to the exclusion of the sorts of amenities most of other cities provide in their urban waterfront parks.

Hamilton still treats what is essentially urban waterfront as if it is a nature reserve: there are almost no cafes, restaurants or pubs (or even kiosks selling ice cream) over tens of kilometres of Hamilton's waterfront. It is possible to integrate small restaurants, cafes and kiosks into parks without excluding other uses.

The total count for over 15 kilometres of waterfront from east to west is :

So, that's three fast food places, an ice cream counter, one or two restaurants and a cafe in 15 kilometres. The city built a kiosk that served ice cream and drinks in 2000 at the start of the waterfront trail by the boat launch at Bayfront, but they gave up after a couple of years and it has been shuttered ever since.

The result is that the non-fast food places open all day (i.e. Williams and Barangas) are jam packed in the summer and there are very few places for people who just want to sit and have a drink or a meal by the water. Of course, for those who are so inclined and can afford the fees, the Yacht Clubs do have nice terraces on the water, but they're pretty exclusive!

We shouldn't fall into the trap of thinking that it is either/or for Hamilton's urban waterfront parks.

We can have both large grassy and covered areas for group picnics and informal sports, waterfront paths AND more places for those who want a place to sit and have a drink or a meal with a view of the water. There is clearly the demand for both!

FYI, Beaches grill is closing down permanently. They've stopped all drink sales and are closing for good at end of summer. The owners state that the Conservation Authority wants to use their building as a large bathroom/changeroom. It's really phenomenal to me to see the lack of business at our busy waterfront districts.

Perhaps the out of date planning in Hamilton plays a role?? My wife and I recently chatted about whether we'd ever see ourselves living near the lake when we're older. Our conclusion was that if it happens, it'll have to be downtown Burlington.

Everywhere along the lake in Hamilton is grossly unwalkable and with no business amenities. Currently we are seeing development of a massive parcel of land in Stoney Creek along the lake. No mixed use like downtown Burlington. Just stand-alone residential buildings which are all 50-70% shorter than previously planned after the usual Hamilton NIMBY routine from area residents. So we are now building the district with prime beautiful waterfront access with sufficiently low densities to ensure that business will never have any hope of surviving there, which means they will never come. A giant wasted opportunity in livability, business, tax generation, quality of waterfront life, tourism etc..... Other cities would kill for a prime piece of land on Lake Ontario that is empty and ready to be developed. We've got one, and are wasting it.

So that's down to basically three going concern cafes/restaurants on Hamilton's waterfront, only two of which is open year-round. That really is pretty pathetic. And one is a fast food place and the other is a cafe.