Before McMaster freed its campus from cars, skeptics and naysayers predicted a host of negative outcomes that never happened.

I was one of the people who signed up to be testers for the virtual reality simulation of Hamilton's light rail transit (LRT) line. I was quite impressed with the current station design. Everything is well laid out and functional.

This testing took place at McMaster University. My father was a professor at McMaster from 1977 until his retirement in 1999. Well do I remember the FUD before the central car-free zone was implemented. The sky would fall and the earth open up and university operations would be chaos.

Needless to say, today the car-free zone is totally taken for granted as a matter of course as the only sensible way of doing things.

Undoubtably the same will happen when Hamilton's downtown goes permanently car-free. For a foretaste, come to this Sunday's Open Streets Hamilton. 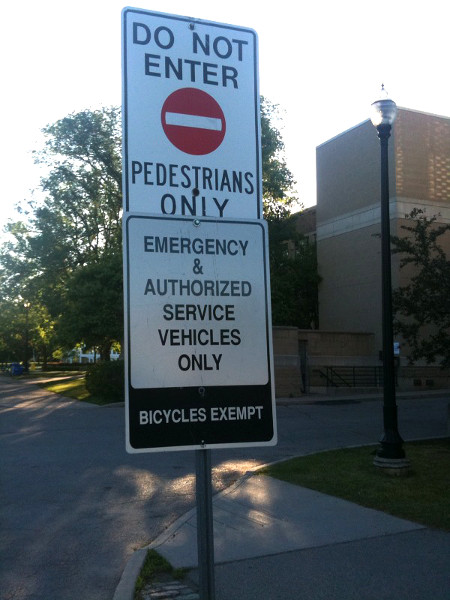 none of the doom and gloom EVER happens. But the NIMBY's do the same song and dance every. single. time change is proposed, and for some reason, people keep listening to them despite decades of absolutely none of it ever coming true.

Oh wow, what a coincidence! I also attended this Virtual LRT in McMaster University as well (but at a different time). I made some comments to the McMaster University team that to help accurately simulate (e.g. for the virtual LRT simulation, add 4 sets of doors with animated sliding doors that simultaneously open. This would demonstrate the "subway-like feel" a bit better rather than a "bus on rails".)

Great start, it was like playing Second Life with an LRT. They mentioned that they are considering the Unity 3D engine too. (If that happens, that provides Oculus headset support).

Right. How could a downtown ever thrive without tons of drive through traffic? Look at Europe like you say right? Have you been to Amsterdam? Have you been to the Marienplatz in Munich? The Altstadt in Frankfurt? Have you been to Times Square recently in New York? Nevermind the typing... here is a list: https://en.wikipedia.org/wiki/List_of_ca... You will see MANY car free zones in successful downtown areas. It can be done. It has been done. It should be done.

Wow. Just Wow. It's people who think like you that are holding this city in some sort of permanent stasis.

It is not the responsibility of future generations to fund some whacked out sense of nostalgia that you and the Bratina's of the world pine for.

Time to get out of the way. Your generation had their turn and blew it big time.

I have yet to see a bicyclist leave Fortinos with 6 bags of groceries let alone 2.

Funny how I see that sort of thing all the time. Looks like one sees what they look for.

Go visit during the school year, cars drive through there all the time man