Mini-putt course just off the Escarpment Rail Trail east of Victoria is being restored to a community asset.

If you veer off the Lower Escarpment Rail Trail a little east of Corktown Park and across Victoria Avenue, you will encounter an abandoned mini-putt course just south of the trail. 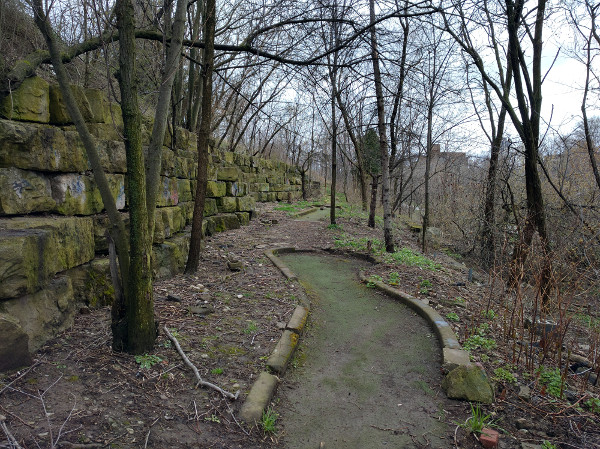 This was a late add-on to the old Sportsman's Lanes Bowling Alley at 467 Charlton Avenue East, added in the late 1980s or early 1990s.

The bowling alley operated from the 1950s to the '90s under a few owners until it became a taxi maintenance facility and, later, the operations centre for Ontario Patient Transfer (OPT), Hamilton Cab and a limousine service.

The building was demolished last year and the site is planned to be developed into The Vista condominiums. 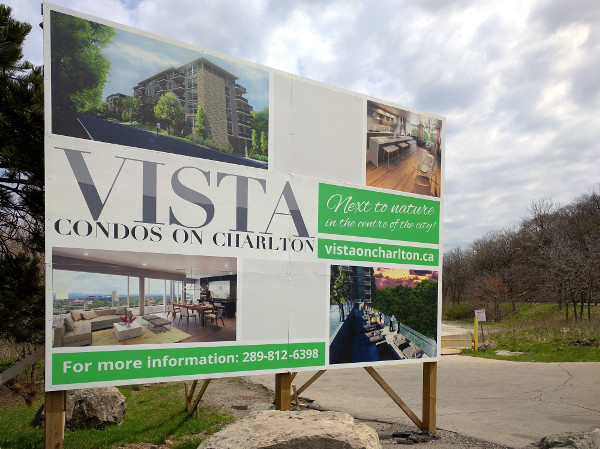 The fellow who led the group that operated the bowling alley is a bit of a legend in bowling circles. Apparently five-pin bowling was invented here in the GTHA and is unique to Canada.

Sportsman's Lanes featured both five-pin and ten-pin bowling, I believe. At this week's Plan Local Ward 2 event, I chatted with a City staff member who spent several summers working at the mini-putt and has fond memories of the experience.

A few of us Stinson residents have started to maintain the greens lately, and this seems to have led to greater use as more people bring their own putters and balls to play a few holes. 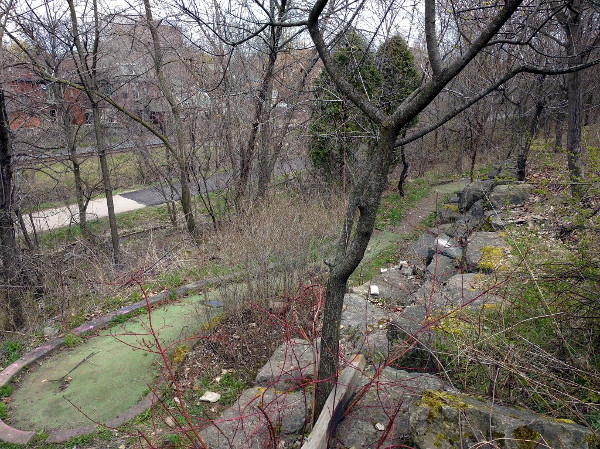 Another view of the mini-putt course (RTH file photo)

We're making this effort to draw a little attention to this quirky little treasure in the hope that people will use it more frequently and exercise a little more stewardship of the area, which is otherwise not a part of the regular maintenance operations carried out by the City of Hamilton.

It is hoped that this positive usage will displace some of the more deleterious usage that the spot otherwise sometimes sees. So far that seems to be working.

The area is quite beautiful and in some ways resembles an amphitheatre. Some of us feel the site would make a great trailside parkette and we intend to explore that idea with the City under the Neighbourhood Action Strategy, in which the Stinson Neighbourhood is included.

Of course, there are always some folks who are more skeptical about change, but we're trying to win them over by staging brief, respectful and fun pop-up events, on and beside the Rail Trail, to demonstrate that increased usage is actually a plus for nearby residents.

Programming-wise, I have been exploring the idea of staging some small theatrical productions there, à la Shakespeare in the Park, and possibly incorporating it into the Fireflies In The Night event, held in the evening of Hamilton's 100in1Day.

If you are a frequent user of the Escarpment Rail Trail and have an interest in its further development, you already know that the Trail is a great resource in many ways, but its potential is even greater.

There are a number of these spots along the Escarpment Rail Trail, including the famous Uli Stairs, hand-crafted by a Hamiltonian named Ulrich. 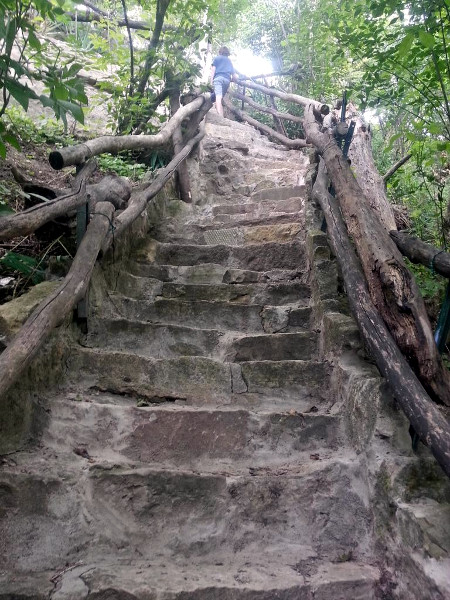 Another treasure is the original Barton Reservoir. From within its bowl there is an odd acoustical effect that must be experienced. A few people have proposed that the City develop that fabulous resource into a full-on amphitheatre and performance space in the style of the Mill Race Theatre in Cambridge. 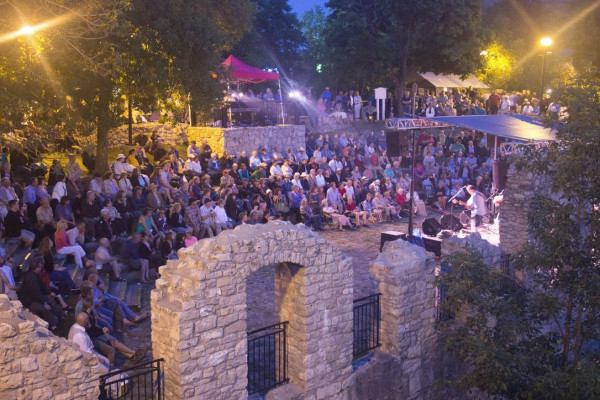 This would be a walk-in, bike-in, roll-in-accessible, non-amplified entertainment facility that folks from both above and below the escarpment could access without using a car.

It might be a little reminiscent of Summers' Theatre [PDF] that once operated at the top of the Incline Railway, near the current Wentworth Stairs.

The recently-discussed potential tramway between Gage park and Mountain View Park could be designed with a midway stop at the Rail Trail, to service the amphitheatre and give greater access to the trail for people at the Kenilworth mid-point who may not be able to scale the stairs.

A few Stinson residents are planning to hold the 'Second First Annual Escarpment Rail Trail Golf Tourney' at some point this summer, probably after 100in1day. A date has not been set yet, but it will probably fall on a Saturday.

We did a dry run for the event on April 1 when we did the year's first clean-up, hence the curious name.

For the official event this summer, I'm suggesting a Flintstones/Bedrock theme and encouraging people to dress up accordingly for the photos.

In any case, keep an eye out for the event date once it has been finalized. It will be posted on the Raise the Hammer Events Calendar and other social media and circulated locally.

i love the rail trail and enjoy biking it often. never noticed the mini-putt, cool!

You can compromise and let some of the natural species grow and build a walking path around them. Get rid of the invasive species and overgrown weeds that have turned into trees, though. A nice canopy to provide shade but also more natural light would be great in there.

When they construct the new condo are they not tearing up that section to make the underground parking entrance?? Its been a while since I saw the plans for that area, but thinking I remember that part. They also have plans to make fitness stations along the rail trail as well in that area.

a beautiful, natural setting unlike anything found in most urban areas. adjoined by a well-maintained trail with a moderate incline, intersecting with a number of outdoor stairway accesses. know what this area needs? fitness areas. to go along with new condos.

This is such a unique and quirky asset. I love that you're bringing it to life!

In the Transportation Master Plan, the terminology used is "enhanced mountain access" and they specifically mentioned a gondola as one of the many options. It may also involve private investment to avoid tax funds. Here's a photograph of my visit to the TMP consultation. I'm researching the Gage-Mountain Park gondola, and am in contact with stakeholders on that.

Apparently five-pin bowling was invented here in the GTHA and is unique to Canada.

Wikipedia agrees with you. 5-pin bowling was invented by Thomas F. Ryan around 1909. See:

I remember those bowling lanes and that golf course fondly. My grandmother was in a 5-pin league at that bowling alley. I also used to bike down there with my friends as a Mountain teen often, as we toured mini-putts from Rymal to the escarpment.

I didn't realize those greens hadn't been taken out when it closed down. Really cool.

I walked along in there numerous times when I lived downtown but never knew the backstory.

I also really like how you're taking it upon yourselves to be the change you want to see and helping to make it a better place! I also hope that you're able to include it in your NAP for Stinson!

Look forward to seeing what you and your neighbours are able to come up with!

I worked at Sportsmen's Bowling Lanes in the mid- to late-80s. The mini-golf course was built in and around 1985 or 86 I believe. The bowling alley itself had 24 lanes of bowling (12 lanes on the east side and 12 on the west) and at least for the duration of the time I worked there, were strictly 5-pin. Interesting note ... I understand at one time there were rock concerts at the bowling alley.

Heh Nice! I spent a summer taking care of this course, and we even started planning an edition with a short chipping section!

Thanks Jeff. Always nice to see some vape fam taking care of our secrets in the city :)

I used to frequent this little treasure a lot growing up as I just lived down the street. This was around 10 years ago and we few that knew about it did our best to clean it up. We had our own little mini putt and we took pretty good care of it. At one point a transient couple were camping up there as they hiked across the country, often leaving a little message for us in a note pad when they were away. I visited the area a few years ago and it looked like some people were still trying to take care of it but alas there was some who decided to add some graffiti to the rocks up there.

I remember the bowling alley quite well and it's a shame that they closed up. It's definitely a whole different world when you're up there surrounded by trees and invisible to most of the path.

Many very fond memories of bowling there, also playing mini putt, I well remember even having a couple of my birthday parties there between 1986-1994.

I missed it badly when it closed, many kids that went through the old CAS after school programs will likely remember the times we went bowling there, my big sister of big sisters/big brothers, took me there so many times I can't count them all, also the week it closed I was there, I even got to buy my favourite bowling ball. (Lost it a few years ago)..

Thanks RTH for bringing back some of my happiest memories, in a childhood filled with abuse & neglect.

This is such a neat find. Ben, I'd love to talk with you about more of the details for the upcoming rail-trail golf tourney. Could you drop me a line? kelly.bennett@cbc.ca

Kelly Bennett is a reporter at CBC Hamilton.

I'm posting this here because I have been asked to:

** The residents of the residential street opposite the rail trail are opposed to people using the former Mini-putt course.

They have expressed concerns over property damage, safety, and natural restoration.**

Apparently there exists an Escarpment Rail Trail Master Plan that seeks to keep people on the paved trail and out of the green areas. (This must be a very old plan)

There have been instances of people driving golf balls at people's homes and the neighbours are of the belief that limiting access to the area is part of the solution.

I think this is a shame because this is after all publicly-owned Open Space, and to the best of my knowledge there is no tax-supported maintenance budget for the area.

I would like to repeat out that our intent in promoting the use of the historic site was to reduce this kind of activity and invite families and others to help keep the area free of garbage throughout the year.

I have apologized to the residents for not asking their permission first but I'm not entirely sure how I feel about the whole matter.

Please note that despite this cancellation, Surprise!Hamilton will still be treating residents to a repeat of last year's 'Fireflies in the Night event, at 8:30pm - 11:00pm Saturday June 4th, *ON* the rail trail itself. We hope to see you there!