I was curious about the distribution of Hamilton Bike Share trips by hour of day, so I took the set of every trip since the service launched a year ago in mid-January and made a chart: 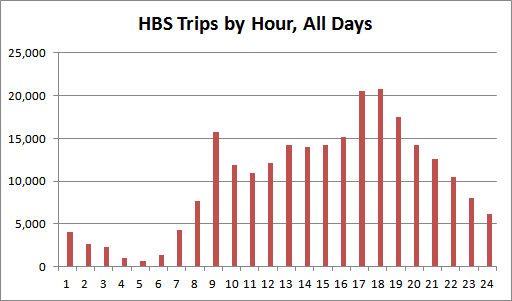 As you can see, the quietest hour of the day for bike share trips is between 5:00 and 6:00 AM, after which ridership rapidly climbs to a peak at 9:00 AM. Ridership declines a bit and plateaus during the day and then rises to a second, taller peak between 5:00 and 6:00 PM before falling off steadily into the night.

I'm interested in those two peaks, which correspond with AM and PM rush hour, when most people are heading to and from work and transportation systems are at their busiest. This tells us that a non-trivial percentage of bike share rides are commutes to - and especially from - work.

To dig a bit deeper, I excluded weekend days from the data set and plotted a chart with just weekday rides. 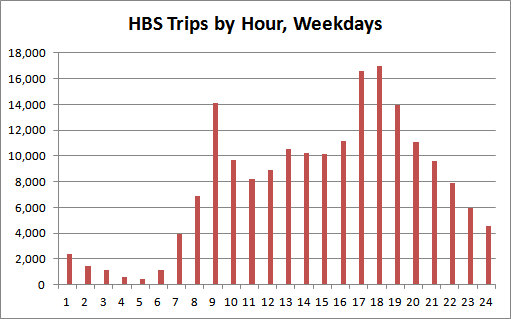 When you strip out weekends, the AM and PM ridership spikes become even more pronounced. They're easily 60 percent higher than the midday average between 10:00 AM and 4:00 PM.

Just to see the spike more clearly, here is a chart of rides per hour on just weekend days: 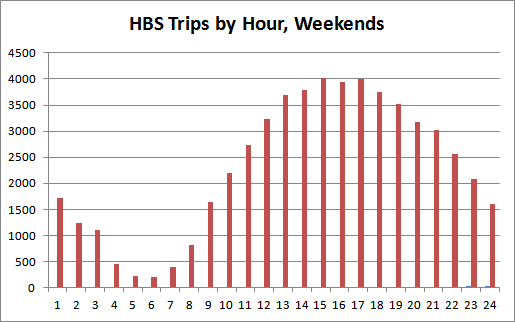 As you see, it follows something closer to a normal (bell-curve) distribution, rising from the lowest ridership at 6:00 AM to a plateau between 3:00 and 5:00 PM and declining thereafter. This weekend distribution of trips looks more like the pattern you would expect of a service that is mainly recreational rather than commuter-oriented.

For me, the biggest takeaway here is that on weekdays, Hamilton Bike Share is definitely not just a way for hipsters to tool around for fun. The results show that that Bike Share is a legitimate component of the city's transportation infrastructure.

For a municipality that too often makes cycling infrastructure decisions based on the assumption that cycling is for recreation, this is an important reminder that public policy should reflect the real potential for cycling to accommodate people's daily transportation needs.

this makes no sense. Certain councillors have data that proves anyone riding a bike or using transit is an unemployed activist. So maybe all these people are just going out for leisure rides during those peak hours and then heading back home to play video games and plan their next activist endeavours.....

Or, maybe human beings without cars still have jobs and go to school like everyone else.....

the smoothness of the curve on weekends is somehow compelling to look at. now how about this - turn this data into a waveform and let's see what the song sounds like

Why do they lose money?

Are you aware that SoBi bikeshare breaks even operationally at half rides per day than BIXI?

Smartbike systems such as SoBi breaks-even at only 2 rides per bike per day average, and I interviewed SoBiHamilton during their anniversary party, for an upcoming RTH article. They break-even operationally.

Sure, they need capital for expansion, but, operationally break even. Huge cost savings occur because bike rebalancing is partially crowdsourced. (Riders get a reward in bike credit when returning an offdock bike to a dock). Full docks don't need an emergency rebalance (SoBi electronic U-bar allows docking nearby pole, tree, fence or regular bike rack).

I own a bike but see the allure of this system. While I still drive to Aldershot GO for more flexible all-day GO service -- personally if I am up early enough in good weather, I now use SoBi to commute to the GO station. My SoBi+GO commute actually competes with my Aldershot drive+GO commute. The 1-way biking convenience allows park-and-forget without the usual weather/theft worries. I can take a bus or taxi "in the other direction" on the bad days. On pay-per-use (the cheapie $5 membership), that 10 minute bike commute to the GO station cost only ~80 cents (the $4/hr is pro-rated to the second), which is cheaper than a bus fare! I was so impressed a year ago, that I upgraded to a monthly membership.

Let's be VERY glad we didn't choose a BIXI type system for a lower-density city -- the smartbike system allowed larger number of dumbdocks spread over a larger lower-density city than Toronto. Ours is 45 sq/km compared to Toronto's 15 sq/km coverage.

But that aside, aren't you in support of free transit?

Fully subsidize the HSR, make it free. But an operational review and economy of scale saving are necessary to cut out the overlap first. Bring all aspects of transportation, including disabled transit, into one structure, and millions can be saved.

Why not free bike share then? The cost to operate the entire bike share system would be similar to the cost of operating a single HSR bus.

how do you "lose money" if you're a not-for-profit?

You would be a terrible treasurer

This article does not mention cars at all. The point is that people are using the bikes for trips that are not pure recreation.

Only when someone (you?) is coming from a perspective of cars being the only legitimate mode of transportation, which they aren't.

I use the service for commuting. It gets me close enough to the b-line bus to make it a viable option, whereas walking to the b-line stop would take too long. I also own a car. Seems like commuting would be the most logical explanation for a spike in sobi rides during peak commuting times. Probably there is a larger spike at 5pm because it includes commuters plus folks just using sobi to run errands after work.

I have a bike and a bike share membership. They serve different purposes. I drive my kids to daycare and school in the morning and suppose I could strap my bike to the back of the car, but for less than $10/month I can access bikes close to work. Makes running impromptu errands easier too. There are many trips that are short enough that I'd rather not drive on a nice day, but that are too far to walk on a lunch break.

You are going to have a hard time taking bike share down if your plan is to attack it on price one rider at a time. Why not just accept that you don't understand it and move on? No one is making you use it. Live and let live..

the riders are paying for it. in exactly the same way every user of every mode of transportation pays for their use, through a mix of taxes, user fees, and direct costs.

I agree this guy seems to like being a prick just for the hell of it.

cut downtowninhamilton some slack people. its really difficult being on the wrong side of history. constantly trying to figure out new ways to not face the overwhelming evidence that your world view is outdated

Yeah, the wrong side of history. That's it. And if my worldview is outdated at my mid 30s, then I can only imagine what the future will bring!

He has a hate-on for downtown because he sold his house in the lower city years ago and now realizes that he not only lost 100k for selling too early but is now paying a mortgage in a suburban desert instead of living where the action is. It is simply spite masquerading as 'a different point of view'.

I am of one who believe SoBi should expand throughout the whole Hamilton metro area eventually, someday.

SoBi Hamilton has been active for about 15 months now. It would be interesting to see this kind of data broken into quarterly segments.

Ever vigilant against the bane of TLS (Toronto Lite Syndrome)

Careful Porkwarrior, the mask is slipping from your identity politics. Tregunno closed (I miss them too) because the family that owned it decided to retire, and the new privately owned business there is mainly office space for small firms, startups, entrepreneurs, freelancers etc - I guess those aren't the right kinds of free enterprise for you.

Oh and the city's contract with SoBi is for 5 years, which means they have another 3+ years to finish becoming self sufficient in operations. So sorry you're offended that they're doing well.

Zero dollars of municipal taxes go into the program, and the initial funding was pulled from money that the province already gave to Hamilton for alternative transportation but was yet unspent.. Meaning it has zero effect on anybody's tax bill. Look it up before shooting your mouth off

As a recent McMaster grad I acknowledge the frustration of the lack of jobs in Hamilton. But services like the bike share actually have the power to bring back jobs to Hamilton, by making it a more desirable place to live. Case in point, one of the reasons I moved to Hamilton was that the bike share allows me to not own a car, saving a ton of money in the process.

Other people choose to keep moving further and further away from their place of work.

It's a free world. If someone wants to get up at 4am and drive for 3 hours that's their choice.

"Because all the jobs that aren't dependent on grants or the gov't have been driven out of Hamilton."

And yet you advocate for the status quo which contributed to the above. That's some kind of civic masochism you're packing there. A far too typical self loathing Hamiltonian.

there's only one thing Hamilton spends billions on. Tally up our city hall spending from 1960 until today and get back to us with the most massive government subsidized aspect of life in Hamilton.

Spoiler: safety of residents during transport won't occupy even a sliver of said graph.

The only thing we spend billions on is police, fire and ambulance and other labor costs.

In fairness they are kinda cute and not very expensive. Like flower boxes. I am ok with that.

you, of course, are referring to trolls?

i love the bike share and use it often for commuting but without investing in a comprehensive, city-wide cycling infrastructure plan and expanding the geographic reach of the program it's not really going to be a serious consideration as a commuting alternative for most people.

Lovely data, Ryan. Speaking as one of those who uses SoBi principally (if not exclusively) to commute to and from work, I have no difficulty believing your thesis. And your data supports that thesis quite unambiguously!

I was wondering about your y-axis. Looking across your charts, it looks like the y-axis numbers are sums (totals), rather than averages? What happens to the scale when you average across days? I imagine that (e.g.) those 20K+ rides during 17h and 18h become c. 50-60 rides/day?

I can be lazy in the morning, so I tend to take the bus from West Hamilton to downtown for work in the morning, but take a SoBi bike home in the afternoon. I also own a car, but my present system costs less than parking downtown, not to mention the raised costs of fuel and insurance if I took my car every day.