In Toronto, the proposed redevelopment of Humbertown Mall in Etobicoke would replace the 1950s strip plaza design with a dense, mixed use development including new multistorey residential units and underground parking. 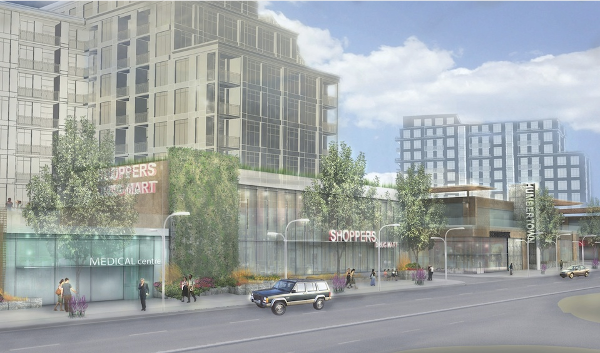 This is just one of several malls being redeveloped in Toronto to be denser, more mixed and less car-oriented.

In Hamilton, almost everyone now acknowledges that we missed a great opportunity with the Centre Mall redevelopment a few years ago.

So check out the new ground-breaking design planned for the redevelopment of the Fiesta Mall on Hwy 8 in Stoney Creek: 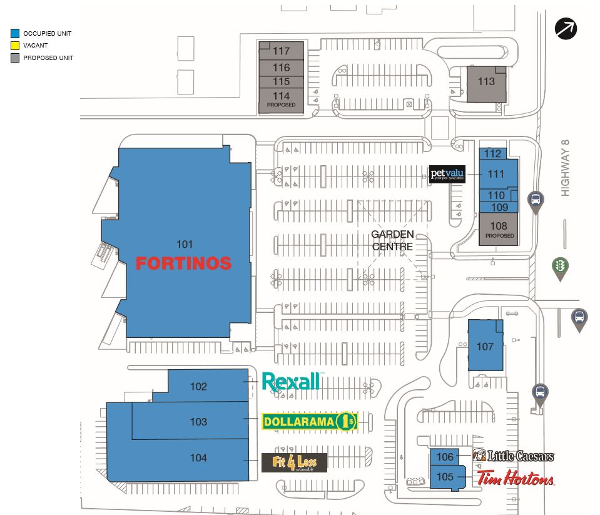 The only urban proposal to come in years along Queenston Road is already being complained about by the local ward councillor, despite a dozen 15-storey buildings already existing across the street.

Everytime I see one of these new 'strip plaza's' with their flat roofs going up I always think to myself, "Why in the world aren't we putting a few more storeys of housing on top?" Seems like huge missed opportunites that we keep on repeating.

It is just a question of priorities. Housing for cars is much more important than housing for people. Remember, anyone who thinks people are more important is a pinko communist sympathizer.

The "red-baiting" thing is kind of fun. But on a more serious note, what really is most like the economic policies of the Former Soviet Union is a policy of pouring billions of dollars into making car driving free for car drivers.

Hence the reason no one cares to listen to or read the rantings of KevinLove, or Ryan McGreal. Such obtuse thinking. Don't read this 'blog' (if you can even call it that) unless you ride a bike. Now, fade to grey. This post will be unliked by the powers that be. Because they are the only ones that matter.

Quiet, people - hear the response of the almighty powers that be!

This article is about 5 years too late. This place was razed and rebuilt in like 2011 or so.

Hamilton isn't Toronto. When it makes economic sense to build housing in plaza locations, which has now started in some Toronto locations , but it won't happen here. But be careful, for what you wish would happen here, as this likely will not happen until homes are considerably more expensive locally. If homes in Hamilton were in the $700,00 or $800,000 range this would start happening here. Would it make you happier then?

When it makes economic sense to convert to housing in mall locations, it will occur. Contrary to what you may think the convenience of parking has value to consumers in general. One only needs to see where consumers shop today, to realize this is case.

As it stands now this land is now more suitable(valuable) for retail with parking, than residential.

Just to clarify, I wasn't referring to the Walmarts or the Dollaramas. This particular plaza is just being built/moved into for the new units 109 and up. It seems like an ideal location to have had additional housing on upper storeys since the tenants below will likely be daytime uses. They corner units also abut the residential street.
GWW - I'm not sure what you mean about would I be happier then? FYI, we do have homes down the street from this plaza at the 700K+ but I'm unclear what difference that makes. Just seems like an infill opportunity missed, along with Centennial Parkway and Service Road right by the new GO. There is no housing and no Mixed Use developments within walking distance.

Viv smart & thinks. Not all commenters and responders do that.

has nothing to do with any of that. It's all about local zoning and development guidelines. Old box stores and strip malls in Aldershot have been transformed into mixed use developments. Why?

Because that's what the city of Burlington demanded on those sites.

It's all about local leadership and vision. Always.

Aldershot retail properties were marginal at best, that were redeveloped. This was a decision by the developers, not the City of Burlington.

nope. was a city initiative. I just read through the official plan changes from many years ago. Easily found online

The retail space in the late 1990's and into the early 2000's was in decline (Think Towers department store) in the Aldershot area. Aldershot itself represents only about 17,000 people in the late 1990's, not enough to attract big box retailers, for the size of the area. If retail was healthy in this area, it would have remained in play, instead the area was in a slow decline.This together with the local BIA wanting the area upgraded, with a greater intensity of residences,(to try and make existing retail more viable) lead to the developer Drewlo building roughly 950 rental units in the area. Drewlo was able to do this because of the relative large parcel of property available,the economies of scale, and as an added bonus the Aldershot Go Station nearby. With upward pressure of residential land prices vs what could be rationalized for commercial in a declining retail environment the changes in land use have occurred in this area. The same conditions do not exist in the Fiesta Mall area.

Other areas in the City of Hamilton have relative declining commercial land prices, but have relatively small parcels of land.(Barton Street). I am not sure how attractive these areas are for residential, similarly I am not sure how attractive living in the Centre Mall area would have been either from a rental perspective or a Condo perspective. Condo's have a hard enough time in downtown Hamilton, even with all the breaks developers get.

If that is your reasoning the Red Hill would still be a valley.

It really should be