In anticipation of the five-year anniversary of the Beasley Neighbourhood Plan, the BNA is conducting a year-long consultation with residents and other community service agencies to determine priorities and action-items for the 2016-2021 Plan.

In anticipation of the five-year anniversary of the Beasley Neighbourhood Plan in autumn 2016, the BNA is conducting a year-long consultation with residents, Charter members, and other community service agencies in downtown Hamilton to determine priorities and action-items for the 2016-2021 Plan.

On Wednesday, November 25, 6:00 PM to 8:30 PM at the Beasley Community Centre (145 Wilson Street), the BNA is hosting a consultation event in order to let the community determine the specific focus & priorities for the 2016-2021 Beasley Neighbourhood Plan.

We'll describe the event in more detail below, but first we'd like to share a little history on why the BNA feels it is so important for the Beasley community to be in control of its own neighbourhood plan.

Ultimately, the decision by Beasley residents to lead their own neighbourhood planning process was one based on a checkered history of civic intervention in Hamilton's downtown. Beginning with the Urban Renewal approach in the late 1950s and continuing for the next two decades, the City of Hamilton has limped from one top-down planning initiative to the next. Each process has been as contentious as the last, and all have experienced mixed results in achieving aims to improve the quality of life in downtown communities.

Finally, in 2011, the City, in partnership with the Hamilton Community Foundation, launched the more holistic "Neighbourhood Action Strategy" and began deploying City and HCF funds to address some of the chronic problems facing Hamiltonians.

By identifying 11 "priority neighbourhoods", including Beasley, the City flipped its traditional engagement approach on its head and aimed to create a grassroots/bottom-up process that meaningfully included residents, especially those marginalized residents who faced some of the biggest challenges.

Though it was initially intended that the Beasley Neighbourhood would be part of the so-called "Jamesville Hub", the fact that the BNA was already a strong voice for Beasley residents resulted in the BNA independently creating its own Neighbourhood Charter & Plan. Since the publication of those documents in 2011, ten other neighbourhood action plans have been published and endorsed by Hamilton City Council.

You can see all these plans here.

By "owning" our planning process, Beasley residents have benefitted from having firm control of the agenda and the kinds of questions that are asked of residents.

Instead of worrying about defending our community's vision from attempts to forcefully align it with those of bureaucrats or politicians, Beasley neighbours have been free to focus on the issues that matter to them, including prioritizing issues like neighbourhood cleanliness and pride, improving street safety and design, and reducing the use of prime real estate for underused surface parking lots.

Here are just a few of the Neighbourhood Plan's objectives that residents from a variety of groups have been tackling since 2011: 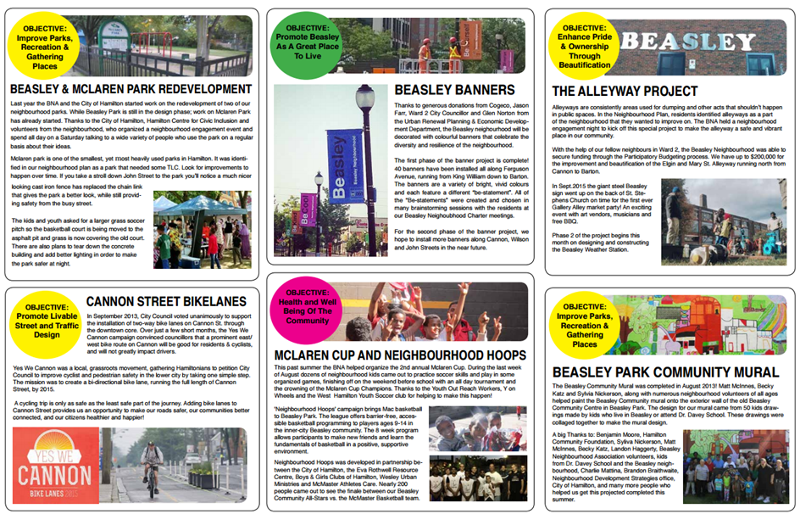 Drop In and Provide Input

The schedule for the November 25 event is simple and inviting: residents and community partners are encouraged to drop-in at the BCC to enjoy complimentary refreshments, and to provide us with the input we need to revise the Plan.

Even if attendees only have a few minutes to spare, we encourage people to stop in at each of four tables set up to solicit feedback on the topics of: Neighbourhood Safety; Parks & Recreation; Diversity & Inclusion, and; Health & Wellbeing.

There will be large-format maps at each table, allowing residents to geographically indicate the places in Beasley where the Plan has succeeded in addressing concerns, and where we still have work to do. Each table will be staffed by pairs of volunteers from our partner agencies and residents, working to facilitate conversations and record comments and other input for use in our analysis.

For those who can't make the event, the BNA is also hosting a handy web-tool on our website to collect this input from participants.

The tool will be available throughout the year-long consultation and we hope it will be widely used to help us create habitat maps of Beasley that will help inform our priorities in the post-2016 period.

Beyond merely planning our vision for Beasley, the BNA wishes to share dispatches from our community planning exercise in order to encourage residents in all other parts of the city (not just "priority neighbourhoods"), to own their future.

We invite all Hamiltonians who live, work and/or play in the Beasley neighbourhood to drop-in on the 25th and help us construct our next five-year action plan.

We would love the opportunity to work with your community to build capacity to conduct a similar, grassroots neighbourhood planning initiative where you live.

Allison Chewter is a recent graduate of the University of Waterloo's undergraduate planning program, where she specialized in land development and urban design. She is a born-and-raised resident of Hamilton (downtown and up) and is eager to put her newly honed planning skills to work in her community. She is currently the co-chair of the Beasley Neighbourhood Association's Planning and Development Sub-committee.