Cycling Improvement on Dundurn South a Small but Important Step

The fact that staff are circling back to this bike lane to improve it holds out hope that other poor connections can also get retrofitted to work better.

As Hamilton's incipient cycling network has slowly come together over the past several years, one of the problems has been the poor connections between bike lanes. A route is only as accessible as its least accessible section, and connectivity gaps - both large and small - are a huge barrier to increased cycling.

The obvious gap here is the stretch of Dundurn between Main and King, where it widens to four lanes with a raised boulevard down the middle. The City has not yet addressed this stretch, but the Dundurn Street South connection is getting just a little bit better for cycling, with the southbound bike lane starting right at Main instead of farther down the street. 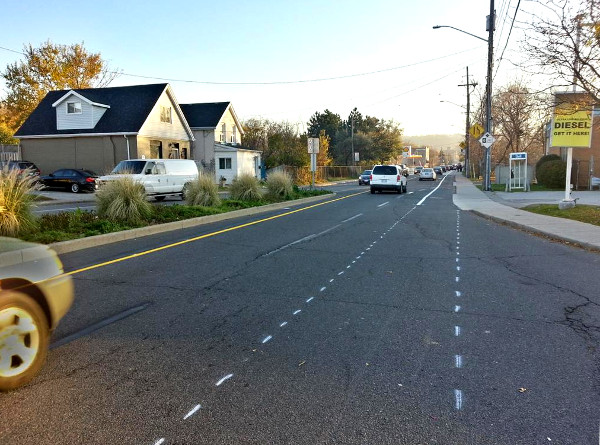 Under the new configuration, the left and middle lanes are both left-turn only, whereas the right lane is the only straight-through lane. 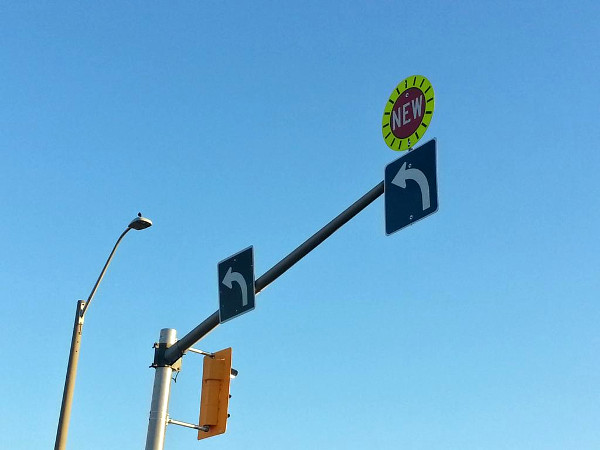 The bike lane starts right at Main and vehicle traffic will be directed to veer to the left of it. 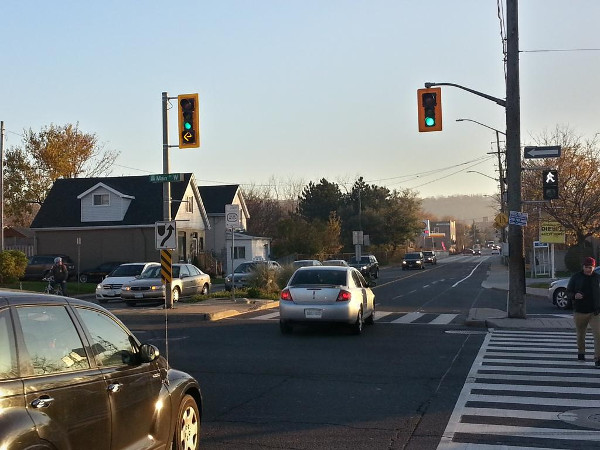 The bike lane extension is currently just stencilled in and still needs to be painted. I hope staff will also paint markings through the intersection to guide vehicles to the left of the bike lane.

This might not seem like it's worth getting excited about, but a high-quality network is ultimately a collection of carefully designed elements. It's the attention to small details - like the ten metres immediately adjacent to an intersection - that makes or breaks a cycling route.

The fact that staff are circling back to this bike lane to improve it holds out hope that other poor connections can also get retrofitted to work better - including the section of Dundurn between Main and King, of course.

With files from Jason Leach

I think it was painted yesterday. Def a small, but needed improvement. Incredibly low-hanging fruit sits at Dundurn and York where currently none of the bike lanes connect. Yet there are ultra wide turning lanes heading north on Dundurn. For some reason a 1 lane street suddenly has 3 wide turn lanes onto York. One of those turn lanes could easily be narrowed to allow for bike lanes to seamlessly connect to both EB and WB bike lanes on York. Ditto for cyclists coming from either direction on York towards Dundurn. Plenty of extra pavement space for the bike lanes to be connected SB on Dundurn.
Hamilton needs to stop with these short bike lanes that end long before an intersection so we can wedge in two extra turning lanes. This isn't Vaughan. Let's stop acting like it is.

It's too bad there isn't the money for a proper rebuild - Dundurn between King and Main could easily 2 lanes each way and 1 bike-lane each way without that silly freaking concrete median that accomplishes nothing but block people who'd like to turn left when exiting the plaza. But removing the concrete median would mean redoing the asphalt and the lights, so that solution isn't really an option. In that scenario, nobody is losing any service on Dundurn - it's win/win. I mean, dundurn could probably get away with 1 car lane each way like the rest of dundurn, but it would be very much easier to duck that conversation altogether.

Another monkey wrench is what Dundurn becomes if/when Main 2-way is implemented, and whatever (minor,major) interchange modifications are needed. Need to figure this out before permanent Main-King Dundurn block design.

I've wanted this exact change at this intersection for years. It drove me nuts to watch an already-short advanced green for left-turning vehicles get clogged up by a few cars going straight through to Dundurn South. As a motorist, this is a huge improvement without even taking into account the fixed bike lane. The bike lane improvement is excellent as well, though limited by the scariness of Dundurn between King and Main. Still, this seems like a win for all road users at this intersection.

I actually find this worse because it used to be easy to take the whole right lane as a cyclist since the middle lane was available to through traffic. Now all through traffic is forced to share the right lane with cyclists, and most motorists are not willing to stay behind a bike for that entire block, making for some hair raising close passes as they try to get around to be first at the light.

As a driver it is worse when there is a bike because of the opposite perspective view of the above problem (the middle lane is not available so to avoid being a jerk by passing close and fast, you have to drive at cycling speed for most of the block)

Dundurn needs a proper bike lane between king and main, and there should only be one left turn lane.

The parking lot should have a dedicated exit onto Main so that none of that traffic needs to use the dundurn left turn lane.

Of course what would truly fix this entire mess would be proper intersections at the highway ramps, and two way main extended from paradise to dundurn (and beyond)

personally I don't see why we need 2 left turn lanes in both directions. I'd prefer if we got rid of the concrete median and had 2 car lanes each way. At both King and Main the left-most lane would obviously be a left turn lane, the 2nd lane would be a left turn or straight through lane. This frees up space for nice bike lanes both ways to connect the gap which is really awful.

We really should not have double lefts at either of these intersections. If the city is concerned about safety there, the first place to start should be to eliminate the double left turn lanes altogether.

There's been another improvement on Dundurn North as well. The south-bound bike lane used to end about five metres short of Hunt Street, which bikers heading to the west end are supposed to turn to follow the bike route. As a result, drivers would start splitting into two lanes approaching King and block access to Hunt from south-bound cyclists. The city recently extended that lane right to Hunt. It's a tiny change, but for the most part, drivers stay out of the lane until after the intersection now, allowing cyclists to freely bypass the south-bound traffic backup that builds up at Dundurn and King.

Yes, I'm liking this one too. Don't know why they stopped it so early in the first place.

They absolutely need to paint some guidelines through the intersection especially now that bikes are in the mix. Every single time I have driven through there I've seen at least one car in the middle lane run straight on to Dundurn. Maybe the >NEW< sign above the left turn sign is too high so people don't notice it?

Next steps on addressing those "Bike Lane Gaps":