My Journey to Become a Daily Cyclist

In the fall of 2014 I made a conscious decision to become a cyclist, and the wheels were set in motion. I wanted a stress-free, convenient and reliable way to get to work and cycling was the answer!

My journey to becoming a daily cyclist began in the fall of 2014 while living near Gage Park. I was working downtown and did not want to start my mornings on an overcrowded bus full of gossiping students on their way to school.

For five solid years previously, I was a daily bus rider as I commuted to McMaster, and I was done with having to wait in the cold and rain, only to have a full bus pass me.

With some global road cycling experience under my belt, I was ready to take on the streets of Hamilton. I'd had a taste of road cycling as I spent some time living in Vancouver where a bike culture is strong, and Critical Mass bike movements are prevalent.

In addition to my Vancouver experiences, on my travels around the world I always took advantage of bike-share systems to see a city and save money. After biking and standing my ground against cars in London, Paris and Rome, I knew that I could handle the roads and drivers of the Hammer. 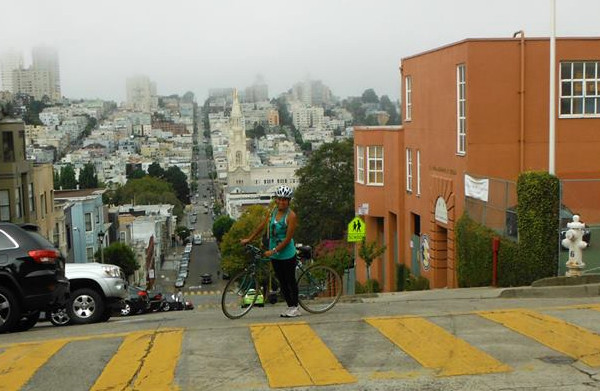 Riding a bike in San Francisco 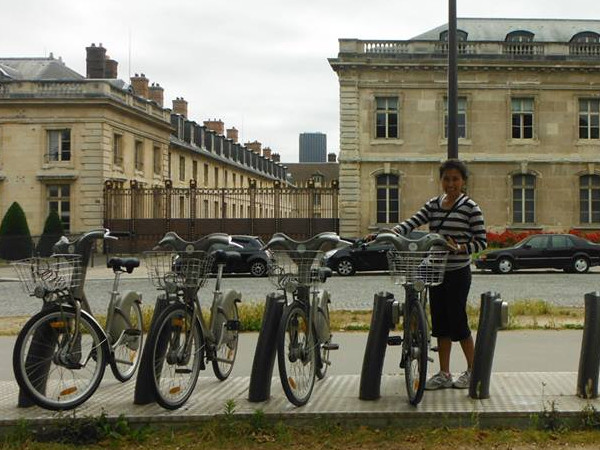 Signing out a Vélib' in Paris

Around September 2014, I convinced my roommate to buy a bike with me. After shopping around, we bought some simple mountain bikes at New Hope Community Bikes.

I got my bike equipped with a basket for aesthetics and practicality and installed the required bell and lights for safety. The next day, we bought our helmets and locks, and we committed to cycling.

Though we had a car available to us, we didn't want to sit in traffic driving toward downtown and also didn't want to pay for parking. And so we set our alarm clocks 10 minutes earlier than usual, geared up and rode the Cannon bike lane westbound.

I was quite slow at first, and cyclists with slim, expensive-looking bikes constantly passed me and showed gracious bike etiquette by yelling "on your left" as they passed.

Our bike commute was faster than the bus, and I felt refreshed and relaxed when I made it to work.

After a few weeks of carrying my helmet and basket into the office, my co-workers were aware of my new social status of a cyclist. Other cyclists in the office helped me adjust my helmet straps and provided tips and stories of being 'doored' or hit by cars. These anecdotes were not meant to scare me, but to remind me of the importance of being vigilant and respectful of road signs.

When winter rolled around, I stopped cycling and appreciated the warm albeit crowded bus ride into work.

By 2015, I had moved into a new house by Bayfront Park and started a new job in the same building downtown as my previous job. My walk to work was a solid 20 minutes, though I am a notoriously slow-walker so another walker with an average pace and longer legs could probably walk that distance in 12 minutes.

During my first week of work, my co-worker - also a cyclist - informed me that our workplace would pay for my Hamilton Bike Share membership should I wish to cycle into work. I was thrilled, and I immediately initiated the purchase and cut my commute time by half. 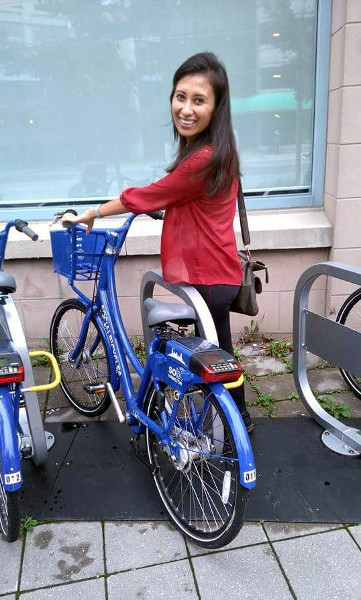 I was really pleased with the SoBi system, especially with their outstanding customer service and the convenience of the bikes!

Currently, I alternate between my bike and a SoBi bike, depending on whether I have time to go out of my way to unlock the SoBi. My partner rides a SoBi and says he's done more cycling this year than in the last ten years of his life. We have a car, but we bike to destinations less than 10km away or with limited parking.

As an environmentalist, slow-walker, lover of Hamilton, and a person who despises waiting in traffic, cycling is a no-brainer. I never worry about where I am going to park, or scramble for change to pay the meter.

Biking to me is stress-free. It's convenient and walking just seems 'so last year'. Sometimes I wonder how I lived without riding my bike. It's a part of my routine, and I want to encourage everyone to give cycling a try!

I didn't become a cyclist overnight. The first time I rode my bike on the street was over six years ago, and only last year I became a daily commuter (and only during weather above freezing). Maybe next year, I will be a year-round cyclist and become a biking Viking!

"I got my bike equipped with a basket for aesthetics"

Not sure I've ever heard that particular combination of words ;)

Welcome to the club! One of my favourite parts of my daily cycle commute is making friends with and waving to people I see everyday, often in the same spot, headed in opposite directions. We may not know each other's names, but there's a definite sense of community. We often exclaim: "Hello my friend!" as we wave and roll by.

Wow what a great article, it's so nice to read. See you on the roads this winter, you can do it!

Once things get crispy out, I think that you'll find that the Sobi bikes have some great advantages. As far as the bike itself, no worry of a chain rusting. And because you sit up on the Sobi, you won't find your sleeves and the back of your jacket riding up - both sources of chilly discomfort when riding a mountain bike.

I always wanted a cute bike with a basket! Instead of a wicker basket I had in mind, I opted for a practical one instead!

Thanks walter_hdb for the encouragement. I've been riding in the evenings and it's quite cool. I have been able to handle the cold so far, will give cycling a chance until I can no longer bear the elements.

Exactly. Cold-weather cycling you dress backwards from normal cold weather - your core will be warmed by biking, but your exposed skin and fingers will freeze. Take off your coat and put on mitts and a scarf.

My wicker front basket is quite practical.

Thanks for providing the link to your article KevinLove. I didn't know there were so many cargo options.

I did not include in my article that a few weeks ago, parts of my basket were stolen *the part that holds the basket onto the bike* (it's a bizarre and pointless thing to steal), nonetheless, I've been in search of a replacement basket so your article was quite helpful!

You are very welcome!

Fear of theft and vandalism is precisely the reason why I am a SoBi member. Everywhere in downtown Hamilton is within 5-10 minutes by SoBi. So if I am going to something that would require me to leave my private bike parked out on the street for any length of time, I take SoBi.

Me too! If you see someone that is well over two metres tall riding the large-frame Pashley Roadster Sovereign with the double top tube, that's me!

I think I cast a curse on myself. Exactly one week after I wrote this, my bike was stolen sometime between 8:30am and 2pm. I parked it by the Farmer's market, where I park it everyday for the last year. :(

And, of course, the Hamilton Police immediately sprang into action to investigate this crime...