The City of Hamilton security video recording of the February 26, 2014 incident between Councillor Lloyd Ferguson and Joey Coleman is to be made public on July 29, 2015.

In response to Freedom of Information requests from the Hamilton Spectator and CHCH Television, with a supporting FOI filing from me, the City of Hamilton plans to release video of the incident in which Councillor Lloyd Ferguson used physical force against me on February 26, 2014.

The City initially denied FOI requests for the video, citing privacy reasons. I filed my own FOI supporting the request of the Spectator and CHCH, and to ensure I clearly waived any privacy considerations for my being in the video.

At present, there are two significantly differing versions of what occurred on Wednesday, February 26, 2014. The release of the video will allow you to determine the truth of what actually happened.

Former Integrity Commissioner Earl Basse's report on the incident includes Ferguson's comments. It has been lambasted widely for failing to interview me or any other witnesses, for having no evidence to support the allegations made against me, and for failing to include any analysis of Basse's decision to excuse Councillor Ferguson's actions.

Ontario Ombudsman Andre Marin publicly criticized the report, saying it is a "model of how not to write a report". 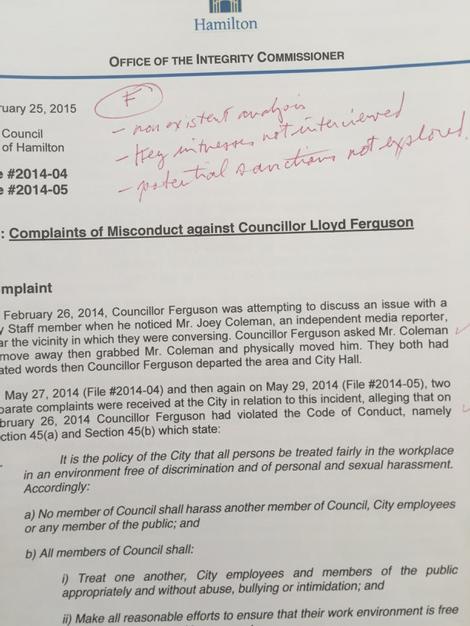 Mr. Marin, who will not have oversight of municipalities until January 2016, says that if he had oversight, he would have sent the report back to be done properly.

What is not in dispute is that Councillor Ferguson made physical contact with me.

My account of the incident, posted shortly after the event, states that I was standing in the public foyer of the Council Chamber:

At approximately 10:45pm Wednesday evening, I was following the City's Corporate Communications Manager to a press conference.

The conference was originally scheduled for a meeting room in the City Councillors area and was being moved into the City Manager's Boardroom, a non-public area.

I had to follow the Manager to get into this Boardroom.

The Manager was stopped by Ward 9 Councillor Brad Clark. The two began a conversation.

I stepped back and was standing approximately three metres from their conversation, holding my tripod - with camera attached - over my right shoulder.

Behind me, from the Councillors offices, a visibly agitated Councillor Lloyd Ferguson walked in front of me saying - to either the Manager or Councillor Clark - "I need to talk to you about something".

Immediately, Ferguson looked at me and aggressively told me to get away from the area.

Before I had a chance to move, Ferguson turned around, strongly clenched my upper right arm and shoved me with force.

He did not let go of his grip, continuing to clench me and strengthening his grip as he very angrily stated with a threatening tone that I wasn't welcome to stand where I had been.

Release Despite Objection of Party in Video

The City Manager's Office ruled that Councillor Ferguson was in his capacity as a Councillor when the incident occurred and that the City will release the video, despite the objection of a person in the video.

The City approached all parties in the video to seek their approval of the release. I've spoken with the City's Communications Director Michael Kirkopoulos, former Councillor Brad Clark, and Councillor Jason Farr. All of them state they signed the release.

One person in the video is not consenting to the release and the City must wait 30 days to provide them an opportunity to appeal to a provincial tribunal.

The City plans to release the video to The Hamilton Spectator, CHCH, me, and others who have filed Freedom of Information requests on July 29.

Thank you for Your Confidence

I wish to thank everyone who has supported me during this difficult experience. I'm humbled by the faith you have shown in my character and approach to journalism, especially in light of the serious allegations made.

I welcome the release of the video.

This article was first published on The Public Record and is republished here with permission.