There is now something for everybody: smooth streetcars, lots of pedestrian space, room for cycling, jogging and skateboarding, and space for cars to cruise - albeit more slowly.

It's arrived! Toronto's waterfront finally got a complete street this weekend when the extension to the Martin Goodman trail was opened to the public. The makeover extends from the foot of Yonge Street (the ghost of Captain John's - Woo!) all the way to Bathurst. 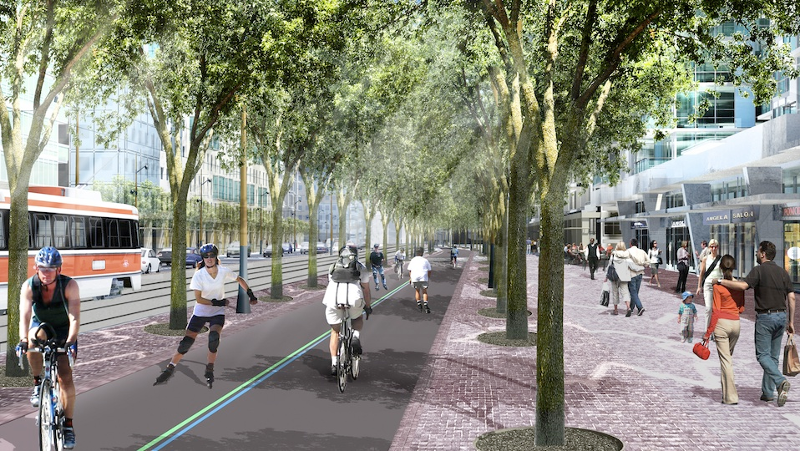 I wheeled my bike down there last night and was very pleased with what I saw. Among the key features of the upgrade:

I had a couple of minor quibbles during my brief tour last night. The grass strips promised during the trial run nine years ago never materialized and the bike trail isn't separated from the sidewalk.

But overall, the experience was highly pleasant and to me it felt like this is the way all streets should be.

There is something for everybody on Queens Quay now. Streetcars have a smooth, cushioned ride (literally: they put the tracks on rubber mounts). Pedestrians have space - lots of it - and skateboarders, joggers and bikes get to share the multi-use trail (what could possibly go wrong?).

Cars can still cruise along, of course, they just have to take it a little slower this time.

In fairness, Queen's Quay will likely get far more use than Tim Horton's field which cost about the same.

Yes, the Queens Quay redevelopment would cost the same the same as about 2.6 km of 400 series HWY extension, when you include the removal of 4 of the 6 existing service lanes, redoing 2.4 km of all the underground power and sewer services, completely rebuild or severely alter 1 underground LRT station (Queens Quay) and do major repairs to 2 more. Replace all the streetcar wires (including brand new energy efficient transformers)for not only Queens Quay Blvd. but Spadina Ave. and the underground portion of the 509 and 510 streetcar routes so that sometime in the future the new streetcars can use their pantographs instead of their ancient trolley poles. Replace an entire 1.7 km of streetcar track, which was going to be replaced anyway due to age and move the entire surface sections of the line 3 metres south to make better use of the right if way.

Keep car and service parking on the north side of Queens Quay, while you finally make the remaining 2 car lanes wider than the lanes on previous street and allow for a centre turning lane. Put in a completely new system of traffic and streetcar favoring traffic lights. Put in wider sidewalks and much superior traffic segregated bike lanes on one of the busiest pedestrian and cycling streets in Toronto and generally improve the look of the area by a considerable margin. On top of that, add many very large shade trees to make it a far more palatable and shaded walk, on Toronto's very hot summers days.

Create a street space just in time for the arrival of many tourists whom are visiting that, will add to the positive image for Toronto. Lastly, create a street that the city can put on a post card or a website and market it to the rest of the world. All of that instead of 2.6 km of ugly suburban 400 series HWY. (4 lanes only) that would just attract more cars and not really change the transportation situation of the area to any great degree, seems like a no brainer to me.

They nailed Queens Quay for the most part.

Could be Main Street here.... but is snows sometimes.....

They haven't quite nailed it: It’s sort of like anarchy on a small scale

Adaptation takes time. It just went in this month.

The Cannon bike track went in a year ago and still drivers can't figure out that you have to check there before turning into the intersection (I got cut off last night and this morning).

These are not crazy bizarre Ontarian inventions, these are established design standards used all over the world.

The street and area looks great now, it is a true signature street. My only wish, that they had used grass on the streetcar R.O.W. (which the fire and ambulance service argued against)as originally planned instead of concrete, it would have been fantastic. These projects are the kind of investment a lot people don't like because they see it as a waist of money because they think it is mostly to do with looks and design. What the naysayers are missing is the complete rebuild of all the underground services, which was desperately needed as well as the improvement and rationalization of transit, cycling and pedestrian facilities, while the road gets redesigned and has been made more efficient. They even kept most of the street parking spaces on the north side of Queens Quay. So Toronto gets a complete street and a new post card picture they can now market to the rest of the world. Well worth the $140 Million in my opinion.

Pan Am village and new Queens Quay to show off to Pan Am visitors. Almost as awesome as the gravel parking lot we'll get to show off on the Scott Park site.

There is a similar planned redesign of Queen Street, 2 blocks south of Wellington Street and Parliament Hill in downtown Ottawa. Queen Street is also the location of the downtown tunnel for the Confederation Line LRT project. All the heavy tunnel construction is planned to be done by summer 2017 (July 1st). The complete first phase of the Confederation Line will be open in the fall of 2018. When the summer of 2017 is over as well as most of the Canada 150 celebrations, the Queen Street surface redesign project is expected to begin.

Oh yes, the Queens Quay project also included the upgrading of underground LRT Stations on the 509 and 510 Line as well as the rewiring of the streetcar right of way that will allow the new streetcars to finally use their pantographs instead of the trolley poles. Its just too bad that, the rebuild of the Ferry Docks at Bay Street (planned for 2018-19) wasn't done earlier and was also open for the Pan Am Games.

That's like saying since we need oxygen to live let's reduce the oxygen so that the plants thrive.

Have you ever been on Queens Quay? With recent development and it being so close to Union Station pedestrians exponentially outnumber vehicles. For those that live and work in downtown Toronto, and that demographic is increasing with every high rise condo erected, a car is a hinderance, not a preferred method of transport.

you should apply for a job in the Toronto planning department. I'm sure they are looking for folks who can help them add even more cars into the city, and make it impossible for other transportation modes to get around.
Because as LA has taught the world, you can never have too many cars.

By no sense of reality (Anonymous)

I use to live on Queens Quay West briefly back in the late 80's and early 90's very few people actually drive to work, especially when you consider how many people actually lived there and with the largest transit hub in the city being a short 3-5 minute streetcar ride away it was stupid unless you had to drive. You could actually walk to the Billy Bishop Airport (Island Airport) in less than 20 minutes if you need to fly somewhere. A mere 10-15 minute walk east is the city's largest open fruit and vegetable market for most of the groceries. At the time there were 2 small Loblaws stores near as well. Both stores closed and was replaced by a Massive Superstore. You don't need to drive in that neighborhood, Queens Quay BLVD. was rarely full, only on weekends when people came down for the shopping and the antique furniture market was there ever grid lock or if too many tour buses came buy at once. There was a bike path back then to that was and obviously still is very crowded and very well used. You really don't need a car much down there! My favorite thing at to do at the time was to ride my bike (less than 5 minute ride) to the Ferry Docks with my girlfriend and go to the Islands for the day.