Increased density, walkability and vibrant infill are exactly what they're asking for from new developments. Why not consistently model that priority in the City's own projects and speed up the process for compliant applicants citywide?

The old suburban model is slowly reversing itself all over the continent. 'Densification' is the new wave. We need smart, beautiful infill buildings on existing services. Every piece of land is a one-time chance to get it right. 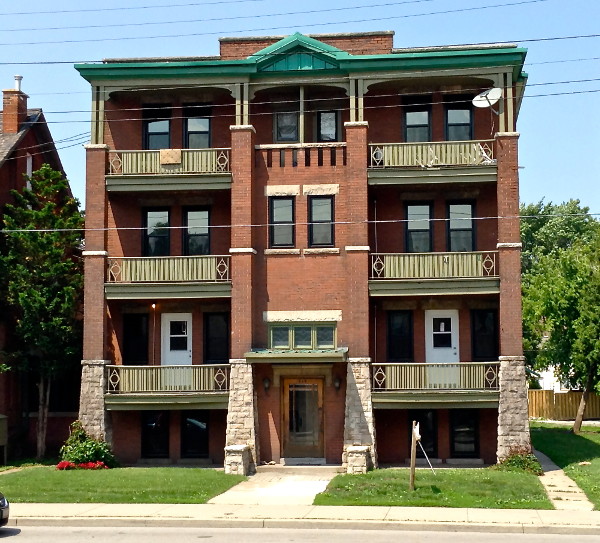 Hamilton's crop of cute multi-family buildings, built in the 1920s, is a signature style in our city. Sweet little walk-ups, usually four storeys tall with 16-24 units, are found all around Gage Park, through the north/east end, the Durand, and Westdale.

Sometimes in pairs around central courtyards, many with internal balconies, their small footprint fits snugly along the edges of single-family neighbourhoods.

No elevator, no big shadow cast over the neighbours, no massive parking lot. There'd be less opposition, and fewer trips to the OMB if we were to start building this style again.

Of course, there's more profit for developers in going taller. A small apartment block can't match the financial potential of a high-rise.

But where high-rise is incompatible with the surrounding form or not permitted in our Official Plan, the city could give preference - and a quick trip through the permit process - to structures that contribute to the valued character of existing neighbourhoods.

Sixteen households on land that had one (or none) is indeed intensification.

What's the low-impact version of densification? In downtown Dundas, buildings the size of Amica or the DVSA, with commercial at grade and residential above, would be a beautiful fit on properties needing redevelopment.

Look along Plains Road in Burlington for examples of great-looking buildings that are redefining Aldershot village into a new urbanized entity. 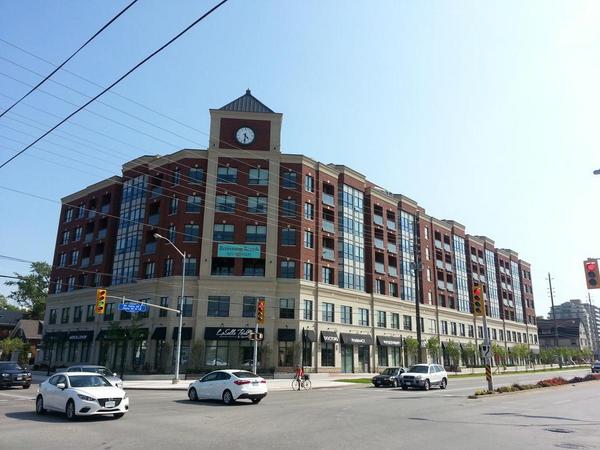 A tired old secondary highway with dated motels, car lots and strip parlours has become a real neighbourhood that's walkable and inviting. The enhanced residential/commercial mix has re-energized the area into a lively and viable all-ages community.

Quality builders are now pitching classy, innovative projects to an area that was on the decline.

In Dundas, we seem to get a lot of development applications seeking higher density up to nine storeys (the Official Plan says six is the max) in neighbourhoods where the existing form is largely single-family.

Naturally, they get caught up in heated objections and are stalled, sometimes for years. Huge amounts of staff time is spent on processing applications with little chance of approval.

When the city itself is the applicant on a development, we should expect leadership in increasing density and adding value to the community. 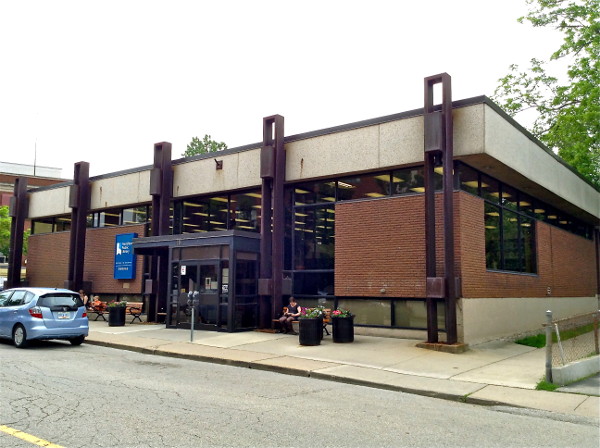 In 2016 our town library is about to get a $1.8M internal renovation. But when all is said and done, it'll still be the same single-storey building, containing only a library, right in the heart of Dundas's downtown.

Why not demo it - it's no architectural prize - and build a beautiful new four-storey on the site? The condo directly opposite is five storeys.

Give it a vintage brick look that connects with what everyone already loves about Dundas - our beautifully-intact 19th century streetscape. 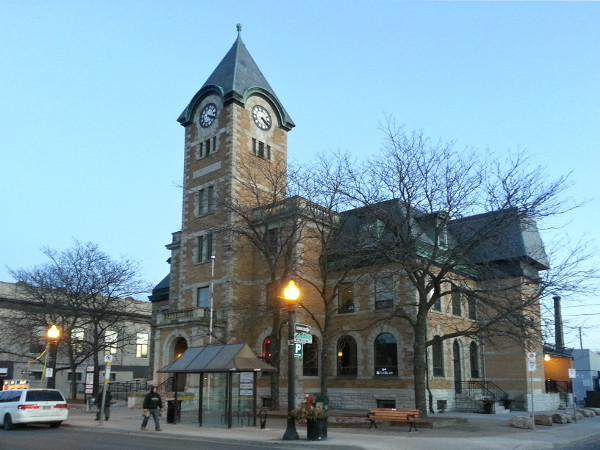 Put the library into the basement and first floor, then add three or even five floors of residential on top. Density would be increased, taxes would flow in, and community would be served.

Speaking of served, Dundas Community Services is just around the corner on King Street, facing onto sad and lonely Grafton Square, the place that fun forgot.

Why not consolidate services, reduce duplication and give DCS a larger space inside the library building? Add a community kitchen or a Seniors' drop-in, and maybe even the local policing office, for a logical and user-friendly grouping.

Then encourage cafés and restaurants into the now vacant space on Grafton square, with trees, patio tables and umbrellas, bringing added value and enterprise to the downtown streetscape. The current bleak state of the square doesn't begin to justify the public money spent to build it.

When I think of 'town planning', this is the level of integrated exercise I'm talking about.

The redo of the Westdale Library a few years ago followed the same pattern as the Dundas Library: an internal reno with no housing component.

They could have added three storeys, gained tax revenue, and been perfectly in keeping with the village aesthetic along King Street. Instead, it's the same so-so building, revamped inside.

The Starbucks/Shoppers Drug Mart opposite Mac on Main West coulda/shoulda been a taller building with student residential above. Right opposite the university, on the B-line, close to everything - how could it lose? And with no damage to the area's ambiance. 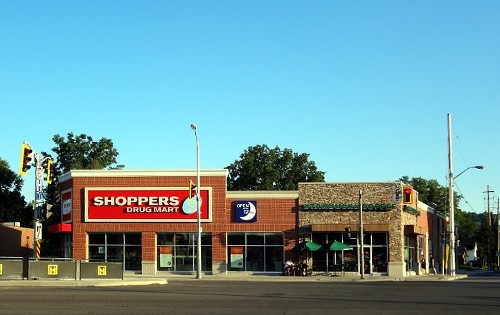 Instead, the McMaster Sports block has just erected a false front to create the illusion of height. Huh?

The City should lead on initiatives like this. Increased density, walkability and vibrant infill are exactly what they're asking for from new developments. Why not consistently model that priority in the City's own projects and speed up the process for compliant applicants citywide?

I'm happy that you find it difficult not commenting on civic affairs :-). Have at it. Nice Op-Ed.

Great piece. So many opportunities for us to add good development to the built-up area. We've got to learn this, and quick.

Another example is the missed opportunity at the Pan Am school/ rec centre site.

Instead of incorporating a dense residential building with underground parking to serve the site, we are leaving a swath of land fronting King as surface parking. All that land will end up only housing a pool, new rec centre and new school.

Folks who back onto the Westdale Library probably would've had a few things to say about adding student housing over it.

Doing nothing is easy.

A good example of main street infill without overwhelming the neighbourhood is being built at Main and Kenilworth:

I suggested to city planners a couple years ago to have buildings at this narrow size and scale be approved for the empty lots or current one-storey plazas along York Blvd with no surface parking out back. As always, there's no such thing as public feedback welcomed at city hall and they rejected our suggestions, which were being made to counter their suggestions to allow 20+ storey buildings along York with dozens of century homes demolished on side streets to provide giant surface parking lots.

So, we fought for a while and eventually the neighbourhood 'won' and the empty lots will remain empty forever (or until we hire some planners who have a clue)

They are proposing a surface parking lot literally AT a future LRT station.

Very easily could have put parking on the main floor behind a street-facing entry foyer and added much needed new housing above:

To help relieve your confusion, I draw your attention to the Marxist analysis of this situation.

You ask why the city doesn't go with a four storey building with underground level that would cost many times over what a reno would? Right or wrong, the answer is right there. Yes, they'd receive long term rental or tax revenue, but we're talking about decades to recoup the costs. Again, maybe what you propose is the most wise course of action, but it's tough for councillors on four year terms to justify that kind of expenditure increase on small scale projects when there are other budgetary demands.

maybe public-private partnerships? I wouldn't expect the city to become a condo developer, but no reason they can't partner with them.

I heard of a proposal from Westdale United Church a few years back to build seniors housing on their property. Nothing crazy 6-8 stories on top of their current gym footprint at the corner of Sterling and North Oval. It would serve a community who already reside in Westdale who perhaps want to downsize but stay in the neighbourhood. The church community can be sustainable and create new revenue for future expenses as their congregation dwindles. I heard the surrounding neighbourhood were up in arms about it. The Westdale Village strip has such huge opportunity to become denser. Look at the site of Saigon Asian restaurant. Such an opportunity to build something 3-4 stories on that corner with retail below and residential above.

St. John the Evangelist was successful with their project.

Perhaps it takes a miracle from God to overcome the mindless NIMBYs.

Trust me. They're not the same people.

I live in the area and this is the first I've heard of that proposal, but I imagine the opposition had something to do with the fact that the secondary plan only allows a maximum of 4 storeys in that area. The rear of church faces toward King St. and a tower that height would be out of character for the area. I imagine a proposal the same height as any of the neighbouring low-rise apartment buildings would have been fine. I certainly would not have objected to it.

Where is St. John the Evangelist? Context is everything when it comes to densification.

So cute that you're pretending you never heard of the zoning by law.

A major change is underway in where and how we are choosing to live. In 2011, for the first time in nearly a hundred years, the rate of urban population growth outpaced suburban growth, reversing a trend that held steady for every decade since the invention of the automobile. In several metropolitan areas, building activity that was once concentrated in the suburban fringe has now shifted to what planners call the “urban core,” while demand for large single-family homes that characterize our modern suburbs is dwindling. This isn’t just a result of the recession. Rather, the housing crisis of recent years has concealed something deeper and more profound happening to what we have come to know as American suburbia. Simply speaking, more and more Americans don’t want to live there anymore.