City Cancelled Sidewalk Inspections in 2012 due to Computer Issues

The City's beleaguered Public Works Department admitted in court that it did not inspect the City's 2,382 kilometers of sidewalks in 2012 due to "experiencing computer problems".

The City's beleaguered Public Works Department admitted in court that it did not inspect the City's 2,382 kilometers of sidewalks in 2012 due to "experiencing computer problems". 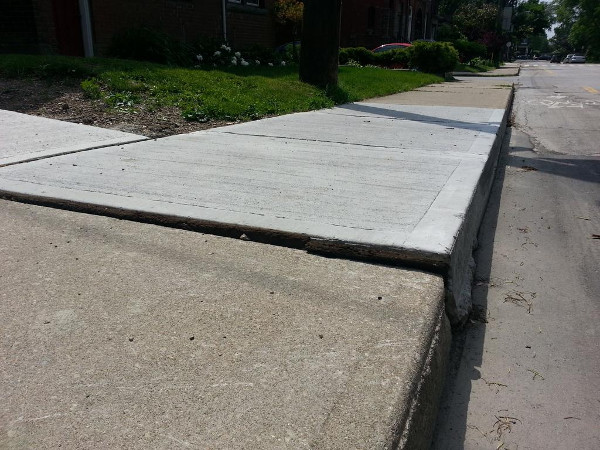 Paul McShane, a project manager in Road Operations for the City, told the Superior Court of Justice this information in a lawsuit the City lost in which a 89-year-old woman tripped on a sidewalk which was not properly maintained.

The woman, who was in good health and fully independent prior to the incident, suffered severe injuries that required hospitalization for 42 or 43 days and then placement in a rehabilitation centre.

From the Court ruling:

[26] Paul McShane is a project manager in the road operations section of the defendant and is responsible for concrete and asphalt services, which includes sidewalks.

[27] He looks after the defendant's sidewalk inspection program and looks after capital projects such as sidewalk replacement. He does so for all of Hamilton.

[28] Mr. McShane explained that at the time of this fall the defendant was in the process of implementing a new inspection program, but was experiencing computer problems in doing so. For this reason, while inspections had been done for the years 2009, 2010 and 2011, there was no inspection done in 2012. An inspection was done again in 2013, but using the old system as the new program was still not working.

This is just the latest revelation about the City's Roads division which most recently was involved in arbitration when managers fired 29 employees assigned to fill potholes.

Of the employees, all but six were rehired with 15 of them ordered rehired by an arbitrator who found there is a "culture of low expectations" from managers in the Public Works Department and this explained the widespread problems, especially in the Roads division.

The Judge found City staff to be uncooperative with the court, declaring the City's district investigator Ron Mol to be a "openly hostile to counsel" in court "obviously biased in favour of his employer, and unreasonably defensive and resistant when asked any questions that he perceived to be contrary to his position or interests, or those of his employer."

The Judge continued, saying the Public Works investigator lacked impartiality and not as credible as the injured woman's son, "Mr. Mol's opinion is that he is right because he says so, and that he says so because he is right. His rigidity and defiance undermine his credibility".

[68] In my opinion, on the issue of the height discrepancy as between the 2 sidewalk slabs, the evidence of Mr. Worthey was the most credible. While I am aware that his relationship with the plaintiffs has to be considered in terms of possible bias, I carefully observed his demeanour as well as what he had to say. I was struck by the fact that in my assessment he was very much aware of his training, both while working in pathology and for the police, and he was not a man given to carelessness or exaggeration. In my assessment he told it exactly as he saw it. He answered questions directly and in a forthright manner, without adding extra comments favourable to the plaintiff's case but not directly called for by the question. I am satisfied that he understood, as a result of this training and his vocation, as well as his character, the importance of both impartiality and precision, and that his testimony reflected both.

[69] I was not impressed with the evidence of Mr. Mol as he is obviously biased in favour of his employer, and unreasonably defensive and resistant when asked any questions that he perceived to be contrary to his position or interests, or those of his employer. He was openly hostile with counsel. The manner of his presentation lacked impartiality. Mr. Mol's opinion is that he is right because he says so, and that he says so because he is right. His rigidity and defiance undermine his credibility.

[70] While free from open hostility and intolerance, the evidence of Mr. Dykeman, in my opinion, demonstrated a bias in favour of the defendant, who he acknowledged to be a main customer.

[71] With respect to both Mr. Mol and Mr. Dykeman, I am not satisfied from the photographs taken by them, or by the answers they gave and the way in which they gave them, that their rulers were touching the top of the lower slab. Mr. Dykeman acknowledges that it does not appear to be the case in his photographs. He would not admit that his first measurement location demonstrates his apparatus to have been leaning over to the left, although clearly it is in the photograph.

[72] In my best assessment, the evidence of Mr. Worthey is the most reliable of the three. I find the height discrepancy between the top of the lower slab and the top of the higher slab to be 15/16" as testified to by him.

Ultimately, the Judge found the inured woman to be 30 percent responsible for her fall - a significantly low number for these types of cases, and put 70 percent of the fault squarely on the negligence of the Public Works Department.

The Public Record sent the City of Hamilton a series of questions related to this ruling.

"Staff are investigating and will be meeting to discuss [the matter]", wrote Michael Kirkopoulos, the City's Director of Communications, to The Public Record on Wednesday prior to the Council meeting.

He says he needs to look into what is happening in the Roads division of his department.

Mr. Davis quickly left at the conclusion of the Council meeting and was not available for media questions.

As of noon on Thursday, the City has yet to issue a statement or respond to questions on this matter.

First published on The Public Record/

I doubt any inspections were done in 2014.

My mother-in-law (a senior) tripped on a root heaved sidewalk on our street. She was bloodied, but thankfully not too hurt. I immediately went to the site, took pictures and forwarded them to the councillor with a description of the incident and requested the sidewalk be fixed.

I received the following response from his assistant, "Thank you for your e-mail and for letting us know about this issue. I have contacted staff and asked them to send someone out."

Months later the City contractor cut down the tree (old and rotten) which had heaved the sidewalk, then they ground out the stump (the bottom of the grinder actually scraped the heaved sidewalk when it moved over it) and today, 16 months later the sidewalk is as it was when my mother-in-law tripped.

Does anyone else get the feeling that Gerry Davis is in a position which is clearly over his head?

Those are all great questions. Would love to learn the answers.

Thanks Joey for this report. I remember that revamp of the Gore Park where slate tiles were in place. I t wa very slippery in the winter months. I was much younger then however if that was today I would of been wary to walk.

Citizens do not have control over many things despite the concept of voting vs campaign promises.

The sidewalk and crosswalk at James and Cannon was in such a state for so long (cold patched asphalt and uneven surfaces due to underground work) people just got used to it. It was only fixed a few weeks ago and is sadly already in rough shape. Sidewalk restoration used to be an art form. Now it gets slapped together as quick as possible ready for replacement in a few years.

I think that we're back to a zeroth problem...

It is time for the city to admit that concerned and interested citizens can build better/faster IT projects if we are supplied with the data. Heck, we can even transform from weird proprietary formats if it's deemed too difficult to achieve open formats.

Here's the killer... it would really only take a mobile app that can guide a user through making a report that dumps to JIRA/equivalent-issue-tracker for a workflow that runs each report through a public works staffer for prioritization, then let the work commence. You can even do the reporting engine with nothing more than a structured email -- to: issuetracker, subject: municipal address, body: description, attachments: photographs -- heck, it'd probably even fit into the 10 user JIRA license. And if you use something less nice (request tracker comes to mind), you can work this thing out for the cost of a pair of hosted servers - ie: effectively zero.

The downside of dealing with this sort of problem (information management) for a day job is that it is too easy to design the problem out and then expect for normal people to just get along instead of arguing about how it can't be done.

You don't even need an IT system. Send out your inspectors, they write down where the repairs are needed, then the next day someone goes out to fix them. If your inspectors find more work than the repair teams can do in a day, have them do something else until you have capacity again.

Or even better, just send out the repair teams to inspect and repair as they go...

Absolutely correct. There had to have been another way for this service to get done but the city gave up on it's responsibility.