Twilight in the Desert

This tremendous book challenges readers to consider the unthinkable - the approaching day when Saudi Arabian oil production goes into decline. 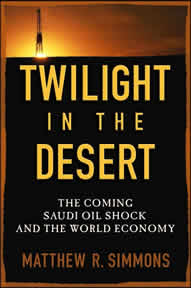 Saudi Arabia is the goose that lays the golden eggs, single-handedly producing almost an eighth of the world's total oil production and picking up the slack when other oil producers run into trouble.

In the original story of the goose, the farmer grew so greedy for gold that he cut open the goose, killing it and ruining his supply of golden eggs. Could Saudi Arabia be killing its golden goose as well?

No one knows for certain how much oil lies under the Arabian sands, but most observers, bolstered by Saudi Aramco's reassurances on the strength of its track record, seem content to assume the kingdom can continue meeting the world's unslakeable thirst for oil for decades to come.

Matthew Simmons, CEO of Simmons and Co. International, one of the world's foremost energy investment banks, has conducted an exhaustive investigation into the matter, poring through 200 technical papers published by the Society of Petroleum Engineers (SPE) in an attempt to piece together an accurate picture of Arabia's secretive oil industry.

The result is Twilight in the Desert: The Coming Saudi Oil Shock and the World Economy, a tremendous new book that challenges readers to consider the unthinkable - the approaching day when Saudi Arabian oil production goes into decline.

Long considered the world's swing producer of oil, Saudi Arabia has amazed observers by pumping millions of barrels a day for decades and occasionally increasing its production by millions more to fill shortages from other sources.

However, Aramco gets most of its oil from a handful of supergiant oilfields: Ghawar, Safaniya, Abqaiq, and Berri, with about half coming from Ghawar. Rapid production increases come from opening the valves at the wellheads rather than drilling new wells, and that means trouble.

Simmons worries that Aramco has overproduced its oilfields, earning short-term production at the price of long-term access to their remaining oil. "The rush to produce as much oil as the world demanded strained the physical limits of the reservoirs," Simmons notes, causing structural damage and potentially rendering much of the future reserves inaccessible.

Aramco brags about the technological advancements it has made in how it produces oil, from water injection to horizontal drilling. Simmons looks behind the glossy brochures and asks why Aramco is making such elaborate - and expensive - efforts to extract oil if it is as abundant as the company claims.

Coupled with the SPE papers, this suggests the supergiant oilfields are aging rapidly and may not be able to continue producing heroically for much longer. Since Saudi Arabia gets most of its oil from a few major sources and extensive exploration has not turned up any more supergiants, it appears doubtful that the country can maintain its production levels once those fields go into decline.

Simmons brings an investment banker's perspective to his investigation: he wants long-term stability and profitability for the world's most important strategic resource. Speculators may be enjoying today's bonanza of wildly fluctuating futures markets, but the longer view requires predictable markets based on clear, unambiguous information.

Along the way, Simmons reconsiders the 1973 oil crisis, noting that global oil consumption increased rapidly through the 1970s despite high prices, as well as the so-called "glut" of the mid-1990s, which seems to have had more to do with the poor quality of production data than any real oversupply.

While the book's main thesis is Simmons' assertion that Saudi Arabia may have less oil than it claims, the necessary corrolary is Simmons' equally firm assertion that the global oil industry desperately needs accurate, reliable, field-by-field production and reserve data. In the current scheme of trade secrets and strategic obfuscation, no one really knows how much oil is being produced.

OPEC stopped publishing field-by-field data in 1982, and several organizations have tried to lift the veil of silence that ensued. The International Energy Agency (IEA), the U.S. Energy Information Agency (EIA), and various private energy consultants currently have to make guesstimates based on sparse data.

One major company, Geneva-based Petrologistics, has only one official employee, Conrad Gerber, who runs the firm from a small office above a grocery store. He claims to get his data from spies who count tanker traffic as it passes through strategic harbours.

As Simmons observes wryly, "the possibility must be granted that Mr. Gerber simply glances at the estimates of many other OPEC production guessers and either uses the consensus views or randomly pulls some numbers out of thin air." Of course, the fact that his reports are in such hot demand only demonstrates how poorly the industry is served by data secrecy.

The implications for a global economy based on cheap, abundant, and ever growing supplies of oil are deadly searious. The world does not have a "Plan B" once oil production goes into decline. Simmons notes, "That such planning has been put off for so long no doubt reflects our normal human inertia in facing up to changes that are momentous in scope and potentially very unpleasant."

Without detailed, accurate, field-by-field reports on global oil supplies, it will be very difficult for countries to make sensible contingency plans. Twilight in the Desert is an essential piece of the oil information puzzle. Oil producers and consumers alike can no longer afford the luxury of whistling in the twilight.

I work in the oil and gas industry and I'm very familar with the issues of peak oil from a geological and petroleum engineering aspect. We're in complete denial as an industry and as a society about what we are facing. The Saudi's are buying technology today that indicates their fields are indeed watering out and that they have overproduced them for a number of years. Huge amounts of oil will be left in the ground forever because of the mistakes made over the past 30 years. The Cantrell field in Mexico has now peaked. These are the supergiants of the world. There are no new prospects out there that will be able to replace them. The die is cast. We are at peak oil now. How we deal with it is the only question left to answer.

Mr. Simmons also appeared in the movie "End of Suburbia". The director commented that this guy is a serious authority in the business, and also that it was apparent that he truly believes there is something to worry about regarding Peak Oil. I think there are several factors contributing to a brick wall in the road ahead. High gas costs and high consumption floats much of the US debt, so there is no incentive to change anything. A few might toy with alternatives, but most still have to get to work and can't change much - and love their massive vehicles. And we have spent 100 years building the world to run on oil and moving far away from jobs - the problem is coming on way to fast to take another run at it, notwithstanding that there aren't any alternatives without serious lifestyle changes. But since this is really an economic crisis, the question will be how much economic health can be stolen by the coming supply problems before balance and elasticity give way to a serious collapse.