A new parking lot just north of the Pigott building seems to violate the bylaw against operating a parking lot on a building demolished after 1999.

During my Jane's Walk guided walking tour along James Street South yesterday, I noticed cars parked on the vacant lot at 28-32 James Street South, on the west side of the street just north of the Pigott Building. 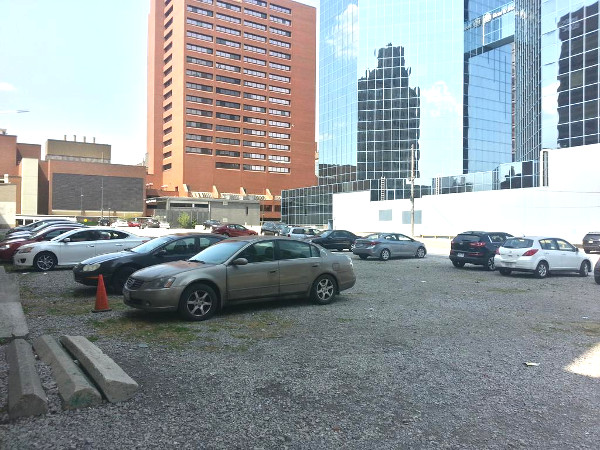 This caught my attention because one of the themes I was discussing during the tour was the changing face of downtown. In 1999, City Council passed a bylaw making it illegal to demolish a downtown building and turn the site into a surface parking lot.

The site immediately to the north at 18-24 James Street South (formerly Robinson's Department Store) was demolished before the bylaw and has since existed as a parking lot.

However, the site at 28-32 James Street South, formerly a Royal Bank, was demolished after the bylaw and has since sat empty - until now.

Ward 2 Councillor Jason Farr has been made aware of the situation and acknowledged on Twitter that it should not be a parking lot.

Similarly, Bylaw Enforcement confirmed via email that it would investigate the issue.

Al Fletcher, the City's Manager of Licencing Inspections and Enforcement, sent RTH the following email after the City investigated:

Officer attended 28-32 James Street South on Tuesday and issued operator given Notice of Non-Compliance with Zoning By-law during the visit. Operator has until May 8, 2015 midnight to comply.

According to Councillor Farr, Yale Properties owns the lot.

Council originally passed the bylaw in 1999 after the the unfortunately-named Canada Permanent building was demolished on the east side of James South, across the street from the Pigott and immediately north of the Landed Bank building.

Update: updated to add response from Al Fletcher that the City investigated and issued an order to comply.

Isn't this the second time you've pointed out an illegal parking lot here? Or was that next door? How is this going unnoticed/unpunished?

the penalty for this will be like the blanchard one; they will toss barriers around the physical building site and let it collect snow/garbage because we can't go upsetting developers in hamilton.

gravel parking lot is being used by the residents of the pigott buidling while repairs of the garage are being fixed. (it is short term)

So. Thoughtful neighbours. Overcrowded hospitals. You should be ashamed of yourself. You can walk five blocks in the rain!

One of the big problems is taxation that is largely out of the hands if civic politicians. I had an accountant cousin who was partly responsible for the the demolition agenda of the 80's. He and his group strongly recommended to building owners that they tear down buildings to reduce tax exposure. They didn't do it specifically for parking lots, parking lots were just an easy way to make some money on the vacant land.

When buildings like the former Robinson's and the Royal bank become antiquated and undesirable as commercial tenancies, something has to be done with them. Instead of giving the owners tax breaks while they decide what to do with them as they sit empty, we continue to tax them at the full rate essentially forcing them to tear them down or give them up.

If I understand it correctly, the Provincial government controls those rules. The City can control demolition permits to a degree, but in some cities were that has been tried it has led to abandonment which can be a worse problem.

Everything has a shelf life and things are either significantly repaired and upgraded or torn down. One of the first rules of taxation is that something has to make business sense before it makes tax sense.

One solution might be to grant a tax "holiday" of several years while a vacant building is either marketed or restored. That would prevent the building from being torn down and turned into a parking lot.

You are right that the Province controls the rules.

However, the tax incentive is to keep buildings empty. Owners get a tax reduction if they empty a building partially or entirely of tenants. The rebate is 30% for commercial properties and 35% for industrial properties. If they further demolish the building the tax goes even lower, to the land value.

For example, when Blanchard demolished the building at Jackson to replace it by a parking lot the taxes went from from about $77k to $7k. This tax structure encourages speculators to buy buildings and keep them empty or demolish them and sit on the land until the value rises so they can make an unearned windfall profit, or until they eventually decide to develop it themselves.

The City wanted to change the rules so the tax rebate for empty units only lasted for a year (enough time for a responsible landlord to find new tenants). After that time the tax would go back up and the owner could decide to sell if they did not want to actually lease the building. The Province wouldn't let them.

Downtown, the city has all sorts of very lucrative incentives to help pay for facade and leasehold improvements. They even offer millions in low interest loans and several years of tax breaks on new construction. There is no excuse for an ambitious and energetic owner not to improve their property and look for tenants. Unfortunately, many buildings are now empty above the ground floor (and have been for decades). This costs the city both taxes and economic and social vitality.

The current system of tax rebates with no expiry dates, and permissive demolition (especially for parking lots) encourages land speculation and costs the city many millions in property taxes and is very detrimental to the economy and liveability of downtown (especially).

This is especially anti-social and parasitical behaviour on the part of the speculators because the land value will only rise significantly if other more responsible and dynamic land owners actually develop and improve their land in the same area!

Quick reminder: the Minister for Municipal Affairs and Housing is the MPP for Ancast Dundas Flamborough Westdale, Ted McMeekin.

That's right, the man at the province with control over this policy is elected by Hamiltonians.

Actually, he was elected by Flamborough and Dundas. He has no incentive to help the downtown, hence his opposition to LRT.

The landlord doesn't empty or keep a building empty. A tenant would be stupid to enter into a lease for a decapitated building. It is a bit chicken and egg.

I like the City's idea with maybe a longer period of time to allow for renovation, but the fault lies with the Province for tying the hand of the people most in the know about the specifics of their city.

This problem is why their are car plants on the 401 instead of in Hamilton. We have tons of brown fields that could have been developed for every level of industry, but the tax base is prohibitive and the province will not allow then municipality to play with it.

The single biggest impediment to development in Hamilton is our tax rate. I bought a building from a billion dollar corporation that moved its entire operation to Burlington simply because of municipal taxes and planning issues. I know five employers personally who took over 1000 jobs out of Hamilton because of taxes.