No One Asks For It!

Acknowledging that sexual assault happens is a first step toward addressing this issue. 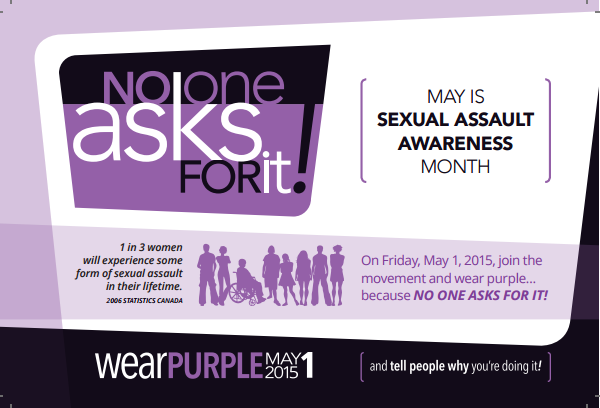 No One Asks For It

Since 1988, May has been Sexual Assault Awareness Month in Canada. For 31 days, individuals, agencies and community organizations make extra efforts to inform the public about what constitutes sexual assault, who is most likely to be assaulted by whom, and what changes are needed to eradicate this abuse.

I prefer to call it Sexual Assault Prevention Month because it's not enough to be aware of the issue. We need to stop it before it happens.

Sexual assault is any unwanted act of a sexual nature forced by one or more persons upon an individual. It includes unwanted touching and rape.

Touching could be direct or through clothing. The victim may be touched by the perpetrator or the victim may be forced to touch the abuser. This is also known as sexual harassment. Consent is not given, or certainly not given freely, by the victim.

Rape is unlawful sexual intercourse or sexual penetration of a person, with or without the use of force, and without consent. This includes situations where the victim is too intoxicated to give consent.

Drugs or alcohol may be used to intoxicate the victim. The victim may have consumed the alcohol or drugs voluntarily or involuntarily. Date rape or club drugs are perhaps the best known means of rendering a victim unable to give consent.

But even anesthesia has been used by abusers like Dr. George Doodnaught, who was convicted of sexually assaulting 21 female patients over a ten-year period while he was an anesthesiologist at North York General Hospital.

It's well known that 1 in 3 Canadian women will experience sexual assault in their lifetime. The majority of victims will be under 25 years of age.

Most women know their attacker. Most do not report the crime to police.

According to Canada's National Clearinghouse on Family Violence (2008), one in six Canadian men will be sexually assaulted in their lifetime.

Most men know their attacker. Most do not report the crime to police.

This is not a crime of passion, love or affection. This crime relies on an imbalance of power that enables the abuser to use coercion and force to control the women and girls, men and boys they choose to abuse.

Acknowledging that sexual assault happens is a first step toward addressing this issue. What we really need to do is look at how society has normalized the imbalance of power and control that enables sexual assault to continue to happen.

We need to place responsibility squarely on the shoulders of the abusers and reinforce that victims and survivors of sexual assault are not responsible for the abuse that was forced on them.

Friday, May 1, stand in solidarity with the victims and survivors of sexual assault - wear purple in recognition of all Canadians who have experienced sexual assault because #NoOneAsksForIt!

This triggered my visceral horror of politicized namby-pamby, victim-manufacturing sociobabble and I nearly wrecked my keyboard with spewed coffee.

But I activated my self-care plan and promptly skipped the entire text and am now talking myself down with a soothing balm of sarcasm.

The language of the trigger alert.

As I wrote earlier, I didn't read the article, the language put me off so.

Not impressed with the trigger alert. Someone appears to be itching for a fight. This is a serious issue that needs less cynicism all around. Such a good article wasted

WTF is this moronic garbage.

What isn't moronic about you weird judeo-christian nonsense about 'passion' and 'lust'? Spew your nonsense somewhere else.

I'm not here to argue with you, I'm here to tell you that you're a moron.

You seem to have a different definition for the words lust and passion than I'm used to. Clothing and movies with sexual content have nothing to do with rape. There is no positive correlation there. Rape and sexual exploitation is most prevalent within cultures (internationally speaking and subcultures here at home) where there is an ingrained belief that one person is of greater value than another. If one sees another as lesser it can be rationalized that it is ok to treat them in a subhuman manner. Women thoughtout the world and human history have been considered second class humans, and while we've made amazing progress in the last century, there is still a ways to go, even in Canada.

Content in movies and games are driven by demand. We live in a society that buys misogyny and violence. Combat the disease, not the symptoms.

I'm a male student who was sexually assaulted on campus at the end of January by a younger female classmate. I can't even begin to tell you how shockingly mistreated I was by the "system" set up to supposedly support me. Not only was I often lambasted for being a male victim who should've "...just pushed her off." or "...punched her right back." but I was also immediately told by a campus worker to "Take it as a compliment." and then went through two weeks of grueling interrogation like interviews where I was often asked if I was exaggerating details or looking for attention. I missed assignments, as well as shifts at work and watched my performance drop downwards along with my grades. All I want to say is that sexual assault can happen to anyone, anywhere, and at anytime. It is not the victim's fault, and should be treated with the utmost standard of care and compassion. I understand that wrapping the notion of sexual assault around one's mind can be difficult, as any sort of extreme trauma is, but that definitely does not merit the sort of comments I'm reading now. Heightened awareness of sexual assault and it's impacts not only empowers victims to think of themselves as survivors but also gives the opportunity for others to come out, seek justice and understand their rights. The monthly dedication is not a symbol for the rise of nanny-statism or some sort of liberalistic infringement but rather the creation of a forum to raise public awareness and give voice to those who were cruelly abused.

Ok, here's a counter argument for you: your discredited, pseudo-psychological bs conveniently turns a social issue into one of personal morality, thereby absolving yourself and the rest of society from the obligation to do anything more than smugly lecture from on high. It's nothing but self-serving wankery disguised as faux concern for victims, and you're not fooling anyone but yourself.

You're really out to lunch.

Speaking of lunch....You mentioned the other ancient notions of sin above, so what is your solution to gluttony? Outlaw tasty food? What about banning food in revealing packaging?

You are triggered by language of sin. Perhaps you are atheist, been burned by false religion.

First, I'm sorry I commented on this post. It is a very important issue, however like Pxtl, I closed my browser and said okay that's enough internet for today. My only thought:

Why do the most religious people consume the most pornography?

Why do countries where women are covered from head to toe have the biggest rape problems?

Woah, let's not punish those that can enjoy a few potatoes chips without consuming the quantity that would damn them for eternity!

I think we're on to something though. Most chip bags leave enough to the imagination, but there are some that reveal a little spud, and I just can't contain myself. And if I see people enjoying chips on TV....my goodness, it's like I'm no longer myself. I must have them!!!

God help any victim of SA who then has to turn around and deal with your BS.

You're being ignored because you spammed the comments with a bunch of ignorant medieval comments equating rape with lust that most civilized people moved past a long time ago.

What literature? Point me to the peer reviewed social science research that says people rape because they see nakedness and are consumed with lust. And take your time trying to find it.

In actuality, your points were simply so poorly written and nonsensical that it was not worth people's time to respond.

closes tab and quietly backs away.

Please do humanity a favor and stay far away from any woman who has been victimized by SA, your typical victim blaming BS will victimize her all over again!

"the person who uses his or her body to entice others" That is Victim Blaming 101. Please stay far away from victims of SA, your barbaric ideas will only make things worse.

My barbaric ideas explains why 30 percent of college students say they would rape if they could get away with it.

Citation please. An actual one - you speaking is not a citation. There is definitely a percentage of psychopaths among the population. But I don't believe this statistic.

Ryan, is it possible to suppress the "banned user (anonymous)" empty comments?