Hamilton Not Doing That Badly on Air Quality

Hamilton can do more to improve local air quality, but the CBC Hamilton article claiming we are "lagging behind" is misleading.

Ontario's Ministry of the Environment and Climate Change has just released its Air Quality in Ontario 2013 Report [PDF].

The report presents a picture of air quality improving province-wide by a variety of measures: nitrogen dioxide (NO2), sulphur dioxide (SO2), carbon monoxide (CO), fine particulate matter (PM2.5), and greenhouse gases (GHGs). Ozone (O3) is the one pollutant that is increasing at almost all locations.

But an article in CBC Hamilton yesterday suggests that Hamilton is not sharing in the improvement:

[W]ithin that trend, Hamilton's picture is a less positive one for some key pollutants.

I was shocked and surprised by this headline, because past studies have shown that Hamilton is, on most measures, quite similar to other cities in the Greater Toronto and Hamilton Area with regards to air pollution.

Because I found the results surprising, I downloaded the report and read it myself. It turns out that the results in the report don't back up the article's claim that Hamilton is doing much worse than other cities.

Figure 3 in the report compares the number of hours in 2013 when each city was above the one-hour Ozone Ambient Air Quality Criterion (AAQC): 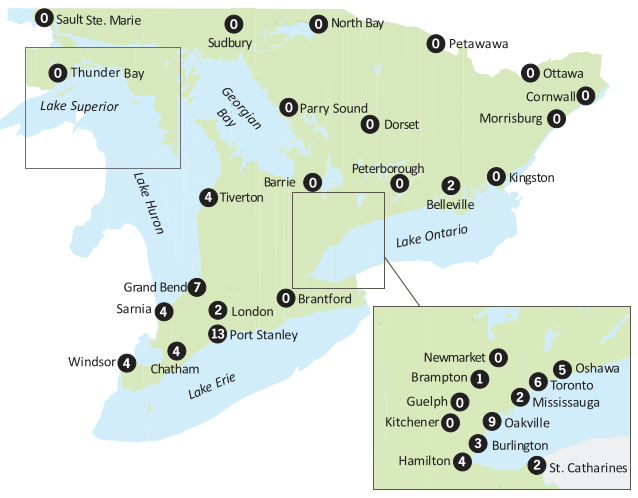 Hamilton is comparable to the other southern Ontario municipalities.

Likewise, Figure 6 in the Report compares the number of hours in 2013 when each city was above the 24-hour PM25 Reference Level: 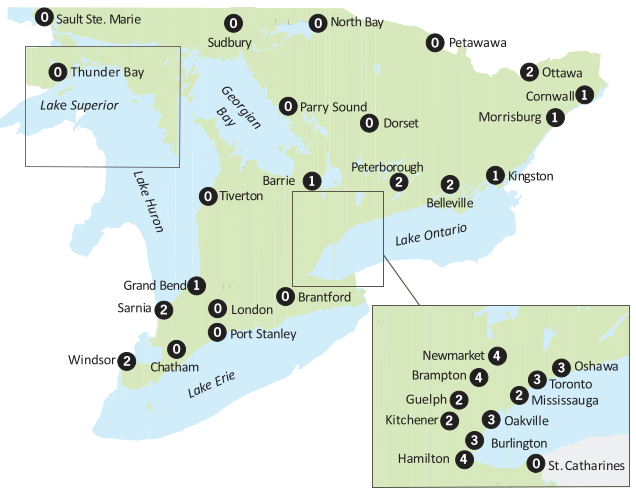 Again, Hamilton is comparable to the other southern Ontario municipalities, matching Newmarket and Brampton.

Table 5.2 compares Hamilton with other cities for ozone and PM2.5 CAAQS (particulates), finding Hamilton is around average:

The annual mean levels for ozone in Hamilton did indeed show the highest jump in the province at 23 percent, but many locations showed large increases: Windsor at 23 percent, Mississauga at 19 percent, Burlington at 21 percent, Toronto East at 16 percent.

[W]hile ambient concentrations have improved, the province continues to experience high levels of ozone due to transboundary air pollution which can result in exceedances of the ozone standard.

This suggests that Hamilton's issue may be primarily atmospheric rather than due to local industry. (A higher level in West Hamilton is not surprising since previous mobile measurements by Brian McCarry showed that the climb up Hwy 403 makes West Hamilton and Ancaster one of the most polluted areas in the city, especially in the summer.)

Nevertheless, sulphur dioxide has declined by 38 percent over 20 years in Hamilton downtown and by 50 percent at Hamilton Mountain, and NOX is down 48 percent in Hamilton Downtown over 10 years (slightly more than Downtown Toronto).

The fact that Hamilton Downtown recorded the highest annual mean level of particulates in 2013 (10.1 μg/m3, slightly higher than Windsor West's level of 10.0 μg/m3 and significantly higher than Toronto West's 8.8 μg/m3) is worrying, although the long term trend actually shows slightly decreasing levels, similar to other cities.

Table A13 includes the caveat:

Ontario’s move to new measurement technology in 2013 has resulted in increased PM2.5 annual means; the increases are not an indication that the air quality has changed, but that the measurements are more accurate.

Most importantly, contrary to the 'belching smokestacks" photo and text accompanying the article, the Provincial report suggests that the high particulates levels in Hamilton in 2013 (especially the peak values) could be due in part to forest fires.

Many of these days recorded above the 28 μg/m3 reference level can be attributed to forest fire smoke that originated in northwestern Quebec, east of James Bay; these include July 1, 2 and 3, 2013 for Hamilton.

The CBC article plays into the stereotype of Hamilton as an extremely polluted city, makes a number of misleading claims and interpretations, and avoids any attempt to actually try to understand why two pollutants, sulphur dioxide and particulates, were relatively high in Hamilton (although still declining).

Hamilton can and should do more to improve local air quality, but the Provincial report does not back up the claim that "Hamilton's air quality lagging behind as province's improves".

With the exception of sulphur dioxide in the past ten years, Hamilton shows similar trends to everywhere else.

Particularly disturbing is the 93 people per year poisoned and killed by motor vehicle drivers. Deaths that are totally preventable by tried and proven methods for progressively reducing car driving as is done in The Netherlands. With the goal of moving to a car-free city as is being done in Hamburg and Helsinki.

Table 5.2 compares Hamilton with other cities for ozone and PM2.5 CAAQS (particulates), finding Hamilton is around average

Huh? If we look at Table 5.2, Downtown Hamilton comes dead last of all cities in Ontario in both 24 hour PM2.5 and also in annual PM2.5. For particulates, Hamilton is not average. Hamilton is the worst.

This is of particular concern since fine particles, specifically PM2.5 and PM10, kill more people in Hamilton than all other pollutants combined. This mortality effect of fine particles may be seen on Figure 14 on page 25 of the Clean Air Hamilton report.

Although motor vehicle drivers produce 50% of all pollution in Hamilton, they produce an absolute majority of the fine particles and NOx that do most of the killing of human beings. From page 25 of the report "The majority of these health impacts were due to particulate matter (PM) and oxides of nitrogen (NOx), primarily from transportation sources."

Hamilton's pollution in the central-east end is horrible and anyone who says it's not has never lived here. End of discussion.

Cleaning, porches, windows and window sills this weekend only re-confirmed this fact. And don't forget having black snot, from simple day-to-day breathing.

That is definitely true: the visible local pollution in the central east end can be very bad in certain, due to industrial emissions. However, I was addressing the information presented in the report. Overall, Hamilton's pollution levels are very similar to the rest of the GTAH because much of the pollution is non-local (e.g. ozone, NOX, some particulates) and much of the remainder is due to transport.

One worrying issue is that the province removed pollution monitoring stations on the beach strip and the East end that would be better able to capture local industrial pollution.

More detailed information about Hamilton is available in the Clean Air Hamilton report:

One of the recommendations of Clean Air Hamilton is that more stations be installed, and that more mobile stations be used. Brian McCarry found that some of the most polluted areas (not necessarily visible pollution) is within 200m of major freeways (403/QEW/LINC/REDHILL/MAIN/KING).

The 2013 Clean Air Hamilton report points out that "Emissions from vehicles (cars and trucks) produce more air pollutants than all other sources."

That is the main reason Hamilton is not all that different from other GTAH communities: the overall pollution level is set by cars and trucks.

A lot of our pollution comes from the OHIO valley and Michigan due to the prevailing westerlies.

I think that's a somewhat dated statement. Not that pollution doesn't travel, but the expanding rust belt has taken care of a lot of that as a pollution source.

There are still a lot of coal fired electricity plants in the Ohio valley, and the Provincial report claims that much of our rising ozone and particulate pollution is due to transborder pollution.

See, for example, this 2005 report (I'm not sure if there is anything more recent):

"Based on 2003 demographics, Ontario is burdened with almost $9.6 billion in health and environmental damages each year due to the impact of ground-level ozone and fine particulate matter. Of this total, approximately 55 per cent is attributable to U.S. emissions."

Canadian Geographic has a nice graphic which shows major emission sources in the USA:

(again, a bit old, but likely not too different now).

Again, I think you'll find that the expansion of the rust belt has reduced the levels since 2003.

I'm not saying eliminated, but reduced. Anecdotally, I think the downward trend of Smog Advisory days from 2003 to 2014 bears that out, airqualityontario.com/press/smog_advisories.php?t=1

Personally, I think the biggest pollution contributor to the central-east end is AMD and cars. Different types of pollution, but both are significant and if I were to pick the #1, I'd pick AMD.

And don't forget that Ontario has now closed all its coal-fired generating plants which should have a big impact:

And the map shows that the vast majority is upwind of southern Ontario:

This makes it difficult for Ontario to achieve very low levels of ozone and particulates. Of course, the "easiest" thing Ontario can do is reduce car and truck traffic (and enforce standards on the remaining industrial emissions).

Yes, but not all coal plants impacted local pollution levels, Nanicoke yes, but not Thunder Bay or Atikokan.

Note, I'm agreeing but just saying that US contribution have also decreased significantly over the last few years.

IMHO, AMD is by far the #1 contributor to airborne pollution in central-east Hamilton. It's never more evident than at this time of year when you can visibly see the cooler lake temps keeping the emissions tight to the eastern lower city.