Crossing at Wentworth and Cumberland Only an Interim Measure: Farr

A safe crossing at the Rail Trail is still a long-term goal but that will take a long time to achieve, since Canadian Pacific Railway needs to be part of the process and that tends to take a long time.

Last week, the City posted a staff report in response to the 2014 Ward 2 Participatory Budget vote for a safe pedestrian crossing on Wentworth Street South at the Rail Trail, just north of the curve where Wentworth turns into Charlton Avenue East. 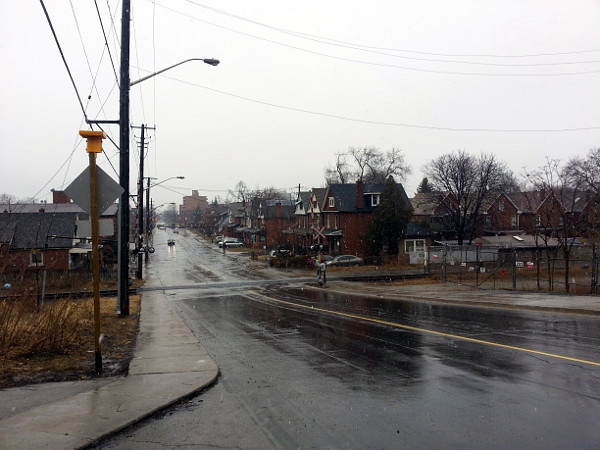 Instead of a controlled crosswalk at the Rail Trail, the report proposed an unsignalized pedestrian crossover at Cumberland - almost 100 metres north, down a steep grade and across a set of train tracks.

The report noted that it would be "unsafe to install a Pedestrian Crossing with signals at the Escarpment Trail location as the sightlines are below the required standard and the downward grade of the roadway and horizontal curve make it impossible for motorists to observe and stop safely for the pedestrians at this location." 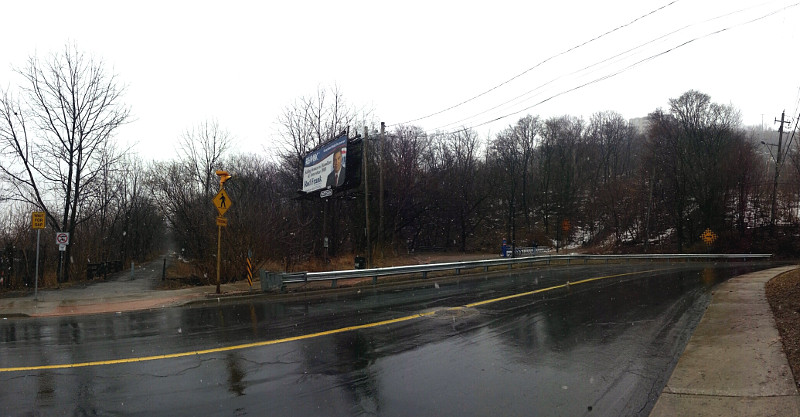 Wentworth Street South bending into Charlton Avenue East, with the Rail Trail on the left side

Also last week, Ward 2 Councillor Jason Farr and staff held a meeting with Stinson Neighbourhood residents to present the plan and solicit community feedback. The meeting was promoted with flyers to nearby residents and 40-50 people attended.

At the meeting, Farr clarified that a safe crossing at the Rail Trail is still a long-term goal but that will take a long time to achieve, since Canadian Pacific Railway needs to be part of the process and that tends to take a long time.

In an email to RTH, Farr wrote, "At our Stinson NA the other night we made it clear that the goal remains a safe crossing at the rail trail (not further up or down). Our Superintendent also shared that the conversation must include CP (as per a mandate) and that CP projects take time. The signals at the trail must be coordinated with the train crossings."

The crossing at Cumberland is intended to be an interim measure as part of a suite of traffic calming changes with which the City can proceed right away.

Those changes also include narrowing the lanes on Charlton with paint and hatching to provide a wider buffer from people walking on the sidewalk and replacing the guard rail that protects the south side of Charlton and east side of Wentworth, including the Wentworth Stairs.

Farr wrote, "The [Stinson Neighbourhood Association] gave me some marching orders: speed up talks with CP for the ped light at the trail. Reach out to the Province on allowing speed humps on minor arterial for this area and knock on some neighbours doors to see if I can get buy in on rumble strips."

He emphasized that the proposed changes, while not fulfilling what the community requested through the Participatory Budget process, are an important preliminary step. "I have already begun to address these asks. In the meantime, sooner, rather than latter, we agreed to get at what we can. In addition, we had some very good ideas from residents to further enhanced pedestrian safety. For example, bollards to the north of the tracks that more truly disginguish two lanes becoming one and prevent racing southbound cars attempting to get in front the queue."

It is encouraging to learn that the staff plan released last week is not the final word on the strategy to make Charlton and Wentworth safer and more inclusive for all road users. 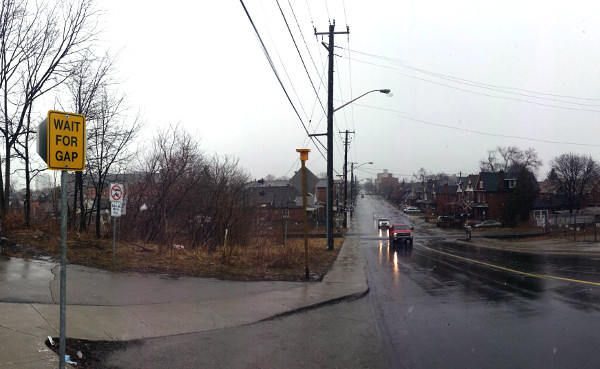 There doesn't need to be a light at the crossing! It is a waste of money on a solution that doesn't work. I can see it now - A light that makes peds wait 90 seconds, and everyone crosses on the red regardless.

Does the city need CP permission to paint hatches? Cause why don't we just start with that?!

Then install a speed hump before the curve for Northbound cars.

Does CP need to give permission for these?

Or just put a stop sign at the actual intersection of Wentworth and Charlton, so that no one will approach the blind 90 degree turn at 50 km/h.

yep and then the crossing can be reconfigured to curve up to that spot. there's lots of land to accomplish a way better solution than a fake light

I don't use the rail trail from the west. Its too dangerous crossing Welligton. Cars come around that corner faster than 50 kph. My biking career has nearly ended trying to make that crossing. Once was frightening, twice and from my perspective, the city is maintaining useless infrastructure. I don't want to die riding my bike. Cumberland, Stinson etc. are safer routes

I ride that way downhill. You can see the traffic coming heading west. It would be more dangerous heading east.

Sometimes I wonder if city staff have ever left Hamilton. These are solved problems in rural areas.

You know that knurled roadway on the side of the expressway that makes your tires sing if you drift onto it? Well on downhill rural highways that lead up to a stop sign, they put that stuff across the road as kind of a "holycrap slow down you need to stop soon and it's gonna be hard!" thing. This is not rare.

So you throw that stuff on the eastbound side of Charlton coupled with a "hey, stop sign up ahead!" sign and then put a nice normal stop sign at the intersection of Wentworth and the rail-trail.

I know. It's only a challenge in Hamilton because asking us to use brake pedals makes the traffic dept think they failed

Is there any reason why the east bound traffic can't be stopped ahead of the curve? That seems like the most logical solution to me along with stopping westbound at Cumberland as they Re proposing.

So, a community speed zone with speeds reduced to 30, a sign warning of a new stop sign up ahead, and then a stop sign before the crossing. Radical and revolutionary in Hamilton, I know.

Since others have commented everything I feel, in that there are so many very obvious solutions to this problem if we only had the nerve to ask drivers to maybe look around once in awhile, does anyone else think that there's no reason CP has to be brought into this at all?

We can have the lights or signs or bumps or anything else before the tracks on the north side, and before the curve on the south side, and CP will have no reason to be involved, will they? There's already currently no signal process for crossing the tracks on wheels or on foot, so why there has to be CP involvement in this seems lost on me.

It also seems that the city was all "we've received your report and have decided to change everything about it." Pedestrians can already cross at Cumberland. I'm sure hundreds do every day. That's what our report came down to? Why don't you just keep doing what you're already doing?

And though I may be wrong, isn't this the place a couple years ago that jogger was hit by a car and killed when the driver said they couldn't see her?

A far better solution would be to either simply build a tunnel under the road so cyclists aren't interrupted by car traffic, or a bridge further up the trail that then grades slowly back down after Wentworth has been crossed.

This is satire, right? There is absolutely no justification for separated grades on a road with such a small trickle of cars! In a city that can't afford to fix the existing bridges, you'd propose building MORE???

No thanks, pedestrian tunnels are awful. Try being a woman, the trail is bad enough by itself for a woman alone, adding a tunnel makes it a no-go.