Ward 2 Residents Vote for Safe Crossing at Charlton and Wentworth

A pedestrian-activated traffic signal for trail users across Wentworth at Charlton will be funded by the Ward 2 area rating fund after voters picked it as a winning proposal in the participatory budget.

For years, people have warned that the blind curve where Charlton Avenue East meets Wentworth Street is a deadly disaster waiting to happen. Last October, it happened: Zoe Nudell, a 33-year-old jogger who had just moved to Hamilton, was killed after being struck by a suspected drunk driver. 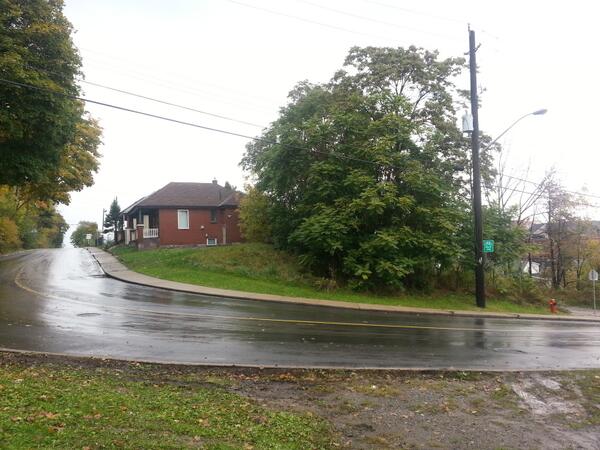 Visibility is very poor around the corner, which has a large enough radius that automobiles don't have to slow down much to make the turn. Compounding matters, the busy Escarpment Trail crosses Wentworth just north of the corner, so hikers, runners and cyclists regularly cross the street with no traffic controls.

After Nudell's tragic death, residents got an answer to the question: Does someone have to die before the City makes some changes to this corner? The answer, of course, is that even a death was not enough to spur the City to action.

So Ward 2 resident Art Dyck submitted a proposal to the Ward 2 Participatory Budget process to use some of the ward's area rating money, a capital fund available to old city wards, to make the necessary changes.

Wards 1 and 2 allocate their area rating monies using participatory budget systems in which residents can propose projects for consideration, and then the projects to be completed are selected by popular vote.

Dyck's proposal is to install a pedestrian-activated traffic light to control the intersection of Wentworth Street and the Escarpment trail.

The traffic control would be visible to drivers on Charlton heading east toward the blind corner to protect vulnerable road users crossing east-west on the trail. The timeline for implementation still has to be determined, but the installation should happen some time in 2015. The project design will then need to be finalized by Traffic Engineering staff before city workers implement it.

Karen Burson, the PB Ward 2 facilitator for 2014, contacted RTH to clarify that a pedestrian-activated light at Wentworth and Charlton is "one of a set of possible traffic calming methods" and that the final solution will be developed by City staff. Burson writes:

My colleague Nathalie Zur Nedden and I did our best to assist in the smooth idea transferral and the fleshing out of the ideas generated in our April and May community meetings. In my opinion, in all cases the [Budget Delegates'] solutions/proposals are excellent, and this is one of the most worthy ones for the community.

What the volunteer BDs will typically not have under the belts, however, is technical training to ensure the safety, cost-effectiveness, and consistency of their proposals with existing City policy and practices.

That's why in some cases the implementation of the proposals may differ from the residents(s)s' initial vision - from those who first proposed the ideas as community members to the Volunteer Delegates who did their best to bring their neighbours' visions to life.

So, although when Art wrote his well-researched and detailed proposal, and he specified that a pedestrian activated crosswalk was the best solution for Ward 2 residents, the actual proposal as written on the ballot reads this way:

Funds will be utilized to carry out the community's desire for pedestrian safety/traffic calming initiatives (supported by Council with recent unanimous approval) requesting staff-recommended improvements to the area.

The ballot item #19 doesn't actually specify the pedestrian activated light; such a solution is one of a set of possible traffic calming methods.

This is the reason I thought it was important to post this right above and right at the top off the summary of details from original delegate proposals. The note states that the document called "Detailed Project Descriptions for the Website" shows information gathered from the original project proposals as submitted by the team of volunteer Budget Delegates.

Some of the projects described on this year's ballot include the modifications that reflect the feasibility assessments that City of Hamilton staff conducted after those original proposals were written.

What's not to like. Bravo to Art Dyk and the ward 2 residents. No impact on car traffic and so much safer for pedestrians and cyclists.

Just a shame that city hall didn't care enough to do this from Public Works. But yes, kudos to ward 2 residents for getting things done in spite of the city.

This is great news for Ward 3 residents as well (all who use those trails of course). Surprised it's not a joint venture between Ward budgets or perhaps an issue that connects our two wards in the future, can be placed on our participatory budget when that process hopefully comes our way.

We need traffic calming measures across the ward. Too many of the lights sit green when there is no vehicular traffic and pedestrians are waiting to cross. Far too many have a big sign on them saying that pressing the button only activates an audible beep rather than actually triggering the lights to change or at least speed up on changing. Glad to see it starting there, but it needs to go ward-wide!

It was partially driven by the fact that after the accident, the city did act. They put a diamond "People Crossing" warning sign at the northernmost end of the curve.

It was run down and flattened to the pavement after less than two weeks.

My concern is that traffic on Charlton is of such a high enough volume, the city will not do much more than speed bumps, regardless of this tragic death. There is no way they will allow a pedestrian activated traffic signal at the busy and popular 'rail trail' junction! The train crossing already irritates drivers enough that many of them do u-turns in search of another route when the barriers are down. Charlton Street is a main lower city/mountain access road and sadly in Hamilton, cars take precedence over pedestrians.

The 'proposed' condo development of three 6 storey buildings (On Charlton Street East between Wentworth and Victoria, overlooking the rail trail) will total 153 units and be allocated with only 158 parking spaces. This means more traffic and maybe more pedestrians of all ages. Even though this stretch is certainly not pedestrian friendly, the developer is citing the location as being close to public transit.

Access to the closest bus stop for these residents would include walking down Charlton right into this pedestrian danger zone, then they would have to cross the train track and continue walking down Wentworth to Stinson. Not a selling point for anyone considering pedestrian safety or saying 'no' to car ownership.

There is a public meeting at city hall regarding this development. August 12th - 9:30 am. Apart from the blight on the escarpment, the traffic issues on Charlton need to be assessed before 158 more cars add to the pedestrian danger. Zoe Nudell paid with her young life and that is already one too many.

i believe the opposite will happen. people living there will make it a living space, and i believe enough of new residents will want traffic calming measures so they can enjoy their new condo on the escarpment and rail trail. i believe enough of the new residents will be allies in the movement to improve corktown that the condos will have a positive impact on the neighborhood.

Thank you for this article, Ryan, and as well for posting Karen's clarification. I'm hoping we'll be able to encourage the Councillor and City Staff to move on this sooner rather than later, as it was a proposal concept that had been in the PBW2 works for two years running. That it's taken this long to make happen, and that a life had to be lost to make the validity of last year's proposal more evident is a sad shame indeed, but I'm not interested in recriminations; I just want to see that corner made safe, before anyone else gets hurt.

And I agree with Art that the best idea IS a pedestrian-activated signal. With the right amount of pressure and persistence, I believe it can happen. We just need Reason to prevail.

It's going to happen, I am thankful for that, but 2015 is not soon enough, the process had already started before the PBW2 happened, what's the hold up and why are the other wards that border it not putting in money?