Massive, chemical dependent farming is energy intensive, environmentally destructive, and bland. There are better ways to feed ourselves.

Ever since the globalization movement, everything from the clothes we wear and the houses we live in to the food we eat is becoming homogeneous.

Due to mass production and economies of scale, modern manufacturers and producers of food have created massive global operations that pump out jeans, hairdryers, hamburgers, and even similar styles in housing and product design.

This mass production has stretched the purchasing power of our loonies and consumers have been snatching it up, using it, eating it, and discarding it like never before.

Raise The Hammer takes a look at how every aspect of our modern lives has become homogenized in a new four part series beginning with Food and food production.

Part two looks at our cities, architecture and the built environment, part three examines how design and culture is impacted by global homogenization, and part four makes predictions on what the future trend may be toward heterogeneousness.

Ten thousand years ago saw the beginning of agriculture and farming. When humans acquired the knowledge of grains and made the transition from hunters and gatherers, the earth was home to three million people who inhabited all the continents except Antarctica.

That point in human progress may have taken over 250,000 years to reach. Five thousand years later, we acquired the knowledge to harvest all the food we eat today. Civilization was in full swing; with cities like Sumer and Jericho the world's population was reaching 20 million. 1

Today the world's population is more than six billion. 2 The United Nations believes this number will reach 9 billion in our lifetime.

It is fair to say we are witnessing the peak of human population. The problem today, as always, is how to feed everyone. Throughout our existence, humans have often been hungry.

The current obesity epidemic is a result of our ability to store fat to keep us alive through times of low food supplies. Those of us that were better able to store fat were able to survive and produce offspring with the same ability. In other words, the fatter people survived. 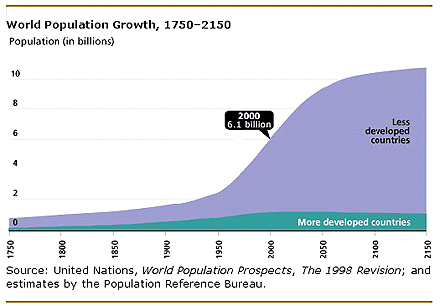 During the 1960s, experts realized a growing problem of feeding the world's people. Test plots in late 1940s Mexico grew a genetically modified grain that greatly improved yields by being more responsive to petrochemical inputs.

The International Agricultural Research Centre (IARC) developed new strains of wheat, rice and corn with the help of the Rockefeller (Standard Oil) and Ford Foundations, and industrial agriculture was born.

At the time, Mexico was importing half its wheat. By 1964, it was exporting almost half a million tonnes per year. The pilot program was then implemented around the world in other developing countries. 3

Traditional farmsteads that grew a variety of crops on a smaller scale could not compete with the larger industrial farms that used chemical pesticides and fertilizers.

The new industrial farms focused on growing massive amounts of a single product. In some cases, entire countries in Latin America lost their variety of local crops and became islands of one-commodity exporters to the world of a single crop. Hence the term 'Banana Republic'.

The Green Revolution did add much more food to the world, rising 11 percent in two decades and a 16 percent drop in the world's hungry. 4

However, the 'Banana Republics' became dependent on one source of income and were at the mercy of commodity prices set at places like the Chicago Mercantile and stock exchanges in London, Hong Kong and New York.

More food in the world is a good thing – as long as you can afford to buy it. These countries were similar to the feudal serfs of the Dark Ages.

Countries like India and Mexico became net exporters of grain. At the same time, these countries become more dependent on the petroleum industry to supply them with fertilizers, pesticides and fuel to harvest their crops.

Further, the increased food supply lowered the price the farmers got on the market, and the cost to produce the food increased, resulting in reduced profits.

From America to China, cities swelled in population as these citizens left behind farming traditions. The rural farmers living in the city and found themselves unemployable save for minimum wage and menial labour jobs. This resulted in the infamous slums of places like Mexico City and Bangladesh.

In the 1990s, Green Revolution researchers started to see declines in food production for the first time. Places like India, Nepal and Philipeans experienced a peak in food production – Peak Food. The world reached a peak grain output in 1978-79 with 131 million tons.

The soil that used to maintain a natural level of fertility through crop rotations, mixing a variety of crops, and use of organic fertilizers (manure) appeared to have a decreased level of fertility. Instead, the soil was degraded due to unnatural injections of petrochemical based pesticides and fertilizers.

The farming of genetically modified seeds has resulted in fewer varieties of some crops. Some 90 percent of other certain varieties have been lost forever. Humans who evolved from an extensive diet of grains are now eating only a few varieties grown exclusively for their high calorie value, appearance and storage longevity, leading to a fibre-poor industrial diet.

The pesticides used on modern crops do not only kill insects. Water Buffaloes used in harvesting have developed mouth disease and lost hooves, fish that used to share the ecosystem with rice plants in the paddies have died off, and 80 percent of pesticide deaths occur in developing countries where the farm workers aren't able to wear the required protective clothing or can't afford it. 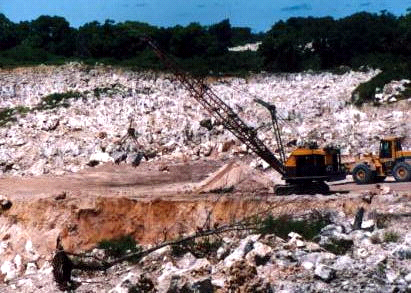 Phosphate mining has rendered most of the tiny island of Nauru barren and unsuitable for agriculture without massive imports of topsoil.

When large areas of land are cleared for growing one particular crop – known as "Habitat fragmentation" – it promotes soil degradation, topsoil erosion and a loss of biodiversity. The isolation of species limits the process that drives biodiversity. The isolated species may be too small to be viable and too distant from other species members for repopulation.

The growth of cities in North America, especially suburban growth, has paved over the farmland that had previously fed the city's inhabitants. Today's food supply now has to travel hundreds or thousands of kilometres in trucks to reach the people.

The blackout in Ontario 2003 proved how quickly our supermarkets could empty out. The recent hurricanes in the Gulf Region also demonstrated that without a constant long-distance supply, the amount of food on hand will last three days at best.

Prior to 1989, Cuba was a model Green Revolution-style farm economy, based on enormous production units and using vast quantities of imported chemicals and machinery to produce export crops, while over half of the island's food was imported.

Cuba was plunged into a food crisis after the collapse of the Soviet Union and a US-imposed trade embargo when it could no longer import petrochemicals. Consumption of calories and protein dropped by as much as 30 percent.

By 1997, however, Cubans were eating almost as well as they did before 1989, with limited use of imported agrochemicals and machinery. Faced with the impossibility of importing either food or agrochemical inputs, Cuba developed a more self-sufficient agriculture based on higher crop prices to farmers, organic techniques, smaller scale production, and urban agriculture.

The government boosted the agriculture education, research, and implementation of alternative methods, as well as the rediscovery of traditional farming techniques. They looked to the past to solve the problem.

The government also sponsored an urban agriculture movement based on small-scale organic farming on vacant lots, which transformed Cuban cities and urban diets in just a few years. 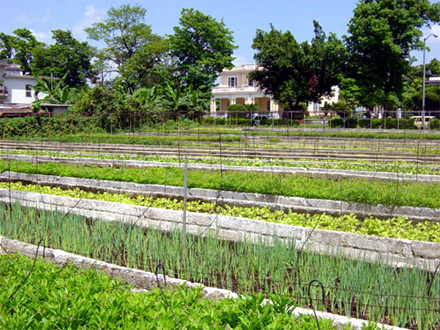 An urban farm in Havana. Photo by Eliza Barclay

The Cuban experience shows us that we can feed ourselves with a small-farm model based on organic techniques, and in so doing we can develop sustainable food production. A key lesson is that when farmers receive fair prices, they can produce adequate food without genetically modified seed and chemical inputs.

Large-scale homogenous farms provided a short-term solution but are much more energy intensive and cause more harm to the environment. Traditional farmsteads growing a multitude of crops, using organic techniques on the fringes of cities, are more efficient, more environmentally sustainable, and in times of energy disturbances, more reliable.

By rajuktitus@yahoo.com (anonymous) | Posted None at

Green revolution is based on deep plowing,cmemical fertelizers,insecticides is not for green but is making deserts.Now Natural way of farming based on zero tillage system is becoming more populer than Organic way of farming in India.Tilling is killing.We are practising and preaching since 20 yrs.The productivity and quality is in this way is on top.

By Trevor (registered) | Posted None at

Thanks Raju for the information. I didn't know India was practicing a natural farming method of zero tillage. Good to hear it is gaining in popularity, this is no doubt more sustainable and mitigating a future dissaster.

By steph (registered) | Posted None at

My guess How the farmer produced more food in the 1750s -- guano. ie. bird droppings. It was mined extensively when it was discovered that its high nitrogen content improved crop yields.

If people have the luxury of time and inclination and space to grow their own 'organic' food, that's a nice hobby, we grow a few things ourselves. But like most people, I also like convenient, efficient, cheap and tasty food
Big Mac or home grown Broccoli- we enjoy freedom of choice-

You don't really need the obnoxious self-righteous socialist ideology to ram down people's throats. Cuba, like all socialist states, does not enjoy anything like the standard of living of the free world, don't ask a professor, environmentalist, activist etc. Just ask the poor bastards risking their lives to flee them!