Farr to Hold Off on Market Curbside Parking Motion 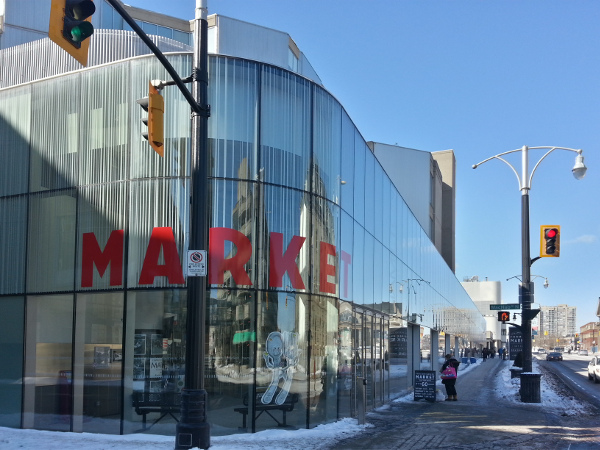 The motion, which you can read by clicking this link on the City's broken-by-design meeting agenda website and then clicking the tiny PDF icon

to the left of the text "Farmers' Market On-street Parking - 9.1 Motion-Onstreet_parking.docx", proposed asking staff to present a plan for returning on-street parking - a proposal that would likely mean eliminating the bike lane on York.

The motion referred to the nearby Cannon Street Cycle Track and proposed a Neighbourhood Greenway linking Cannon with York on Park as a consolation for the loss of the bike lane.

It came in response to pressure from Market vendors who seem to believe the problem with the Market is that there's not enough nearby parking.

Parking is Not the Problem

Removing the bike lane on York to make room for curbside parking would be a terrible idea.

First of all, as Jason Leach argued last week, a lack of parking is not the reason the Farmers' Market has been having problems.

There is already a seven-storey parking structure with free parking directly kitty-corner from the Market entrance at York and MacNab. 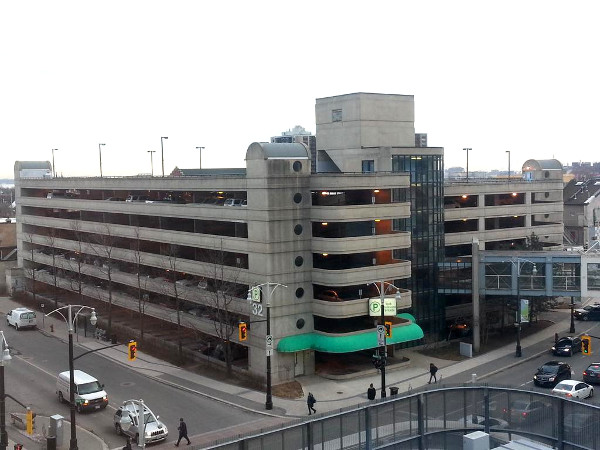 That's closer than I usually get to the entrance when I drive to the supermarket. If people are not willing to cross the street to get to the Market, either the market itself is a very poor value proposition or there is something seriously wrong with the street.

Even notwithstanding the parkade, the usable stretch of curb on the south side of York between Park and MacNab measures around 90 metres in length and includes a fire hydrant.

That means it will be able to accommodate around ten or eleven cars, assuming the city installs pay-and-display terminals.

Does anyone seriously think that will have much of an impact on the Market and its 60 vendors? The bike rack outside the Market typically has more than that many bikes parked (albeit not so much this month).

In any case, the design of York Boulevard was supposed to allow the Market to host outdoor events in the summer that spilled out onto the street. Instead, the sliding glass Market doors remain closed and the sidewalk remains bare and desolate, even on lovely summer days. 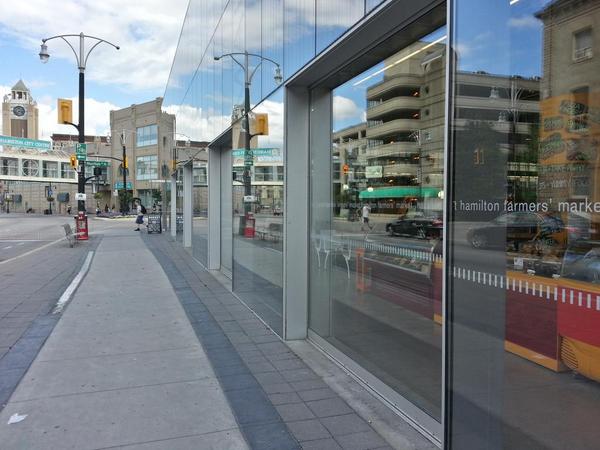 Many of the impressive concepts in the York Boulevard Streetscape Plan somehow ended up left behind. The outdoor environment is a huge unrealized opportunity for place-making.

The promised street trees have mostly not materialized, the very few pieces of outdoor furniture are bizarre in their placement, and York itself is two unnecessary lanes in one direction and one lane in the other - with no way for drivers to turn onto York from James in either direction. 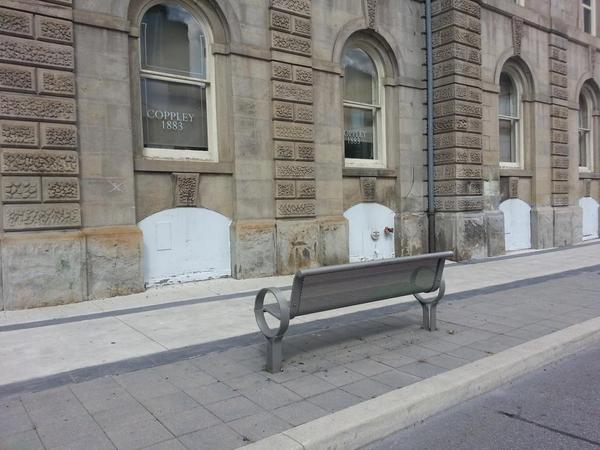 As for the Cannon Cycle Track, it runs east-west 230 metres and two blocks north of York. It does not connect directly to the Market or Central Library or Jackson Square. A Neighbourhood Greenway on Park would get cyclists to York, but then they would have to ride in mixed traffic once they got there.

A cycling network is supposed to be a network of continuous, connected routes, not a sparse dusting of line fragments. Every break, every discontinuity, every out-of-the-way detour makes the system as a whole hugely less usable.

To remove the bike lane segment along York would be a big step backwards, even if Cannon is a block away.

But it's worse than that. We also need to remember that the Cannon Cycle is only a pilot project. Council may yet decide to remove it by the end of the pilot.

I would not have believed this to be a serious possibility until recently. In late January, Council voted to eliminate the transit-only lane on King, despite the fact that the evidence overwhelmingly supported keeping it and mitigating the issues with it, a clear majority of Hamiltonians city-wide supported keeping it, and all the councillors who voted against it were singing the praises of increased transit service while they did it.

Councillor Farr might still decide to bring the motion forward at a later date, but he wants to propose a cross-section that would retain the bike lanes and use the parallel parking to physically buffer the cycling traffic from automobile traffic.

Farr notes that the peak automobile traffic volume on York is comparable to the volume on Stonechurch, which is two-way with one lane in each direction.

Reconfiguring the street with a parking-protected bike lane would give the vendors the curbside parking they want, save the bike lanes and even improve them by adding physical protection from automobile traffic.

The bike lane is currently an unprotected painted lane and is frequently blocked by stopped automobiles.

you know what downtown really needs?

NOTE: this map doesn't include all the underground parking underneath Jackson Square.

Hahaha, "The Time-Out Chair" outside of Coppley! Love it!

Has Clr. Farr made comment on the lack of intended landscaping and seating outside the market?

It is not a parking problem, it is simply poor market offerings. How is this so difficult to understand?

it's difficult to understand because the market stallholders make up the committee with some city staff. They keep looking everywhere but the mirror for the source of the problems. People are less interested in TO Food Terminal offerings as evidenced by the success of places like Goodness Me, Mustard Seed, farm food share programs, and new small-scale farmers markets popping up in neighbourhoods all over the city.

The Farmers Market needs less TO Food Terminal and more Locke Street. That street's success is largely driven by it's locally made food offerings.
St Lawrence Market in TO is a great model. I would like less wilty imported veggies and more local bakers, producers, growers and places to sit, converse and enjoy the market vibe both inside and out.

Compare the bench outside of Coppley photo above to this photo on John St in downtown TO from this past summer. Same type of street as York Blvd. 2 lanes one direction, 1 lane the other.
So they used the curb lane for outdoor patio/flower garden space. That's how a city enhances the public realm and thereby, increases the success of nearby businesses. In Hamilton we put a bench facing a blank wall.