An important but problematic cycling connection in Hamilton could be fixed easily with wayfaring signage at each end and a curb cut.

The Dutch word ontvlechting translates into English as "unravelling" or "unbundling." It refers to one specific tool in the toolbox for implementing the Dutch traffic safety methodology of Duurzaam Veilig or Sustainable Safety.

1. Local access to residential neighbourhoods. Almost all residential streets in The Netherlands do not allow cut-through car drivers. Through traffic is only allowed to cyclists and pedestrians.

2. Car-free main cycle routes. These are no longer simply cycle paths that parallel car routes. In The Netherlands, such cycle paths are now considered old and inferior.

Note how even the "old, inferior" infrastructure would be a big improvement on Hamilton!

The Dutch goal is to take a step up from existing cycle paths along car roads that only separate people from motor vehicle traffic on a road basis. Instead, the entire cycle route is unbundled from car traffic. This provides for main cycle routes that go directly from A to B in a safe and pleasant environment.

How could ontvlechting work in Hamilton? Several other proposals have been made for main cycle routes that would separate people from motor vehicle traffic on a route level.

I have a few ideas myself along these lines. But since I am writing an article, not a book, I'll only look at one specific neighbourhood local access that I use quite frequently: the connection from Jackson Street West to Dundurn Street South. 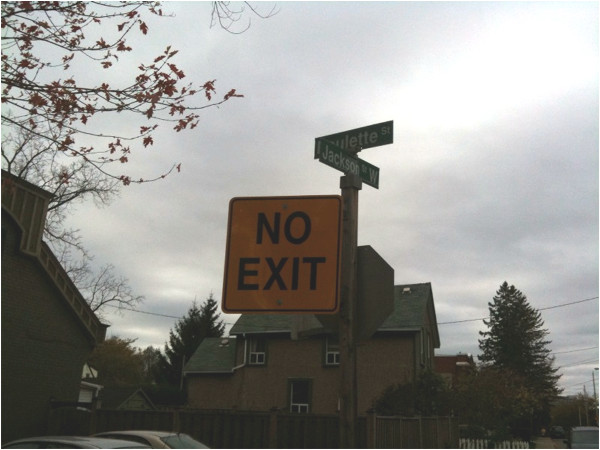 Here is the exit to Dundurn: 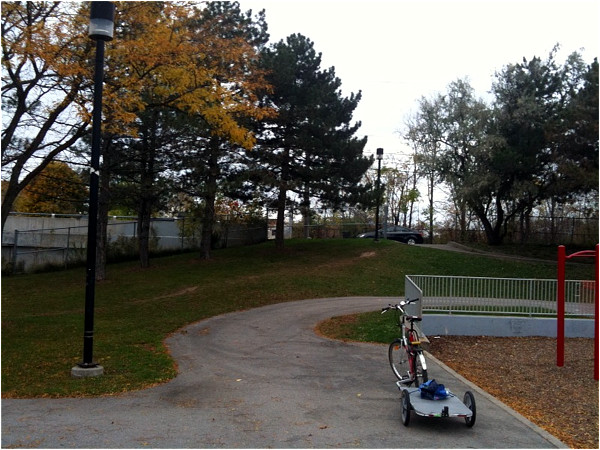 Exit from Jackson to Dundurn

But when we get to the Dundurn Street bike lane, there is another serious problem: no curb ramp from the path onto Dundurn. 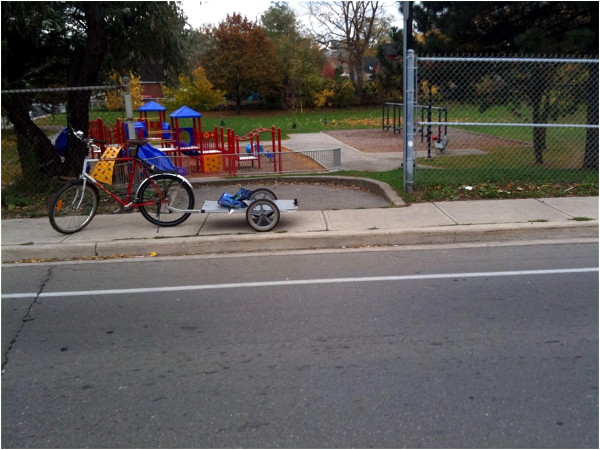 That is quite a formidable curb! Since I am a rather large and healthy man, I can lift my bike and bike trailer over the curb. But even for me, when the trailer is loaded with groceries, this is very difficult, inconvenient and just plain nuisance.

Not everyone is a large and healthy man. For them, a curb like this can mean the difference between a route that is useable and one that is not.

Notice also the total lack of wayfaring signage. From Dundurn Street, there is no way of knowing that this is the connection to Jackson.

These problems are all easily and cheaply fixable. All we need is wayfaring signage at each end and a curb cut.

Dutch cities used to have this sort of neglect of cheap and easy ways to fix cycling problems. They changed. We can too.

Wow. With a little bit of finessing, Jackson could be a cycling route all the way to Wellington; all it would take is some cycling signals to cross a few roads and some separation allowing it to cut through City hall. Can you imagine if council would ever approve building a cycling route on city hall property?

We can't even get decent parking at City Hall. Instead we get racks that are not bolted down securely, will not accommodate a 28" wheel and have snow pushed into them all winter long to render them useless.

There are also bike lockers that are so small that my 62 cm frame bike will not fit into them. Yes, I'm a big guy, but public facilities should accommodate everyone.

I keep coming back to Napier Street. It would take only a little massaging to make this a great East/West route across the north side. Some cyclist-exemptions from all-way stops, a crossing at Queen, some bike signage at the Federal building, and (the only hard part but the thing that should have been done years ago) a 2-way conversion of Bay Street.

Don't forget a crossing at Head/Hunt and Dundurn!

The crowning touch would be a cycling bridge from Hunt St (behind the cathedral) over the 403 on-ramp, meeting the existing 403 bridge on the Westdale side. Not gonna happen, though.

A bridge would be overkill.

A yield sign or a "stop for pedestrians" or something would be plenty.

One thing that would be quite easy is a connection from Hunt to Kay Drage Park. This would allow a bicycle route under the 403 using the existing road to Kay Drage Park to connect to the Desjardins/Waterfront Trail.

And if we want to get really ambitious, then construct a causeway from where the Waterfront Trail ends across to the spit of land jutting out from the Burlington side. Then a cycle route through the cemetery to Spring Gardens Road in Burlington.

This would not only create a Main Cycle Route fully separated from car traffic, but it would be a much shorter route to Burlington than the car route using York Blvd/Plains Road. Fast, direct, easy and convenient... that is what cycle routes should be like to take us from A to B.