A Multi-Use Trail on Our Hydro Corridor

I'm working on a couple of active lifestyle/green infrastructure ideas for the Hammer. Here's the first one, and it should be super-simple: a mixed-use walking/cycling path along our entire hydro corridor.

It starts at Olympic Drive in Dundas, which, along with York Road, should be rebuilt with protected bike lanes right over to York Boulevard. Talk about prime access to the Dundas Eco-Park!

Now follow the hydro corridor south to the base of the Escarpment. This is the only part that would require a significant investment in the form of a large switchback cycling/walking bridge up the side of the Escarpment and over (or under) Hwy 403 terminating at the Scenic Drive entrance to the Chedoke Rail Trail.

Think of a multi-use path version of Lombard Street in San Francisco: 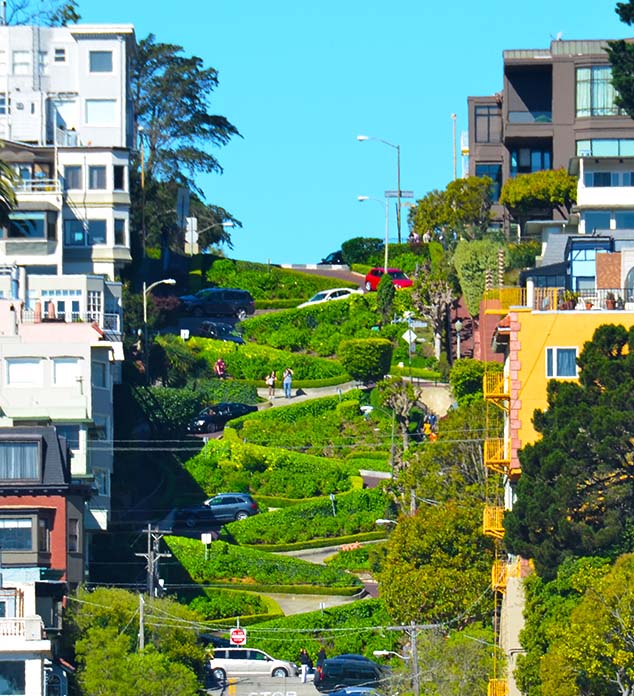 From here, it continues south along the hydro corridor to south of Rymal. The corridor then heads east to roughly Pritchard Road, then north to Rosedale Park.

From Rosedale it heads north to Strathearne and the CN line. I'm guessing there is space on the south side of the CN corridor to extend the trail over to the Red Hill Trail, which already exists over the QEW to the Beach Strip.

Even without the Escarpment crossing switchback, which I think would become an instant landmark and favoured running/cycling route, this greenway literally encircles the entire city. It's a multi-ward recreation trail on land that is already there and available for such a use.

In fact, on this entire hydro corridor there are already rough pathways after years of people using them to go for walks. Considering the entire route is within the urban area, it can be used for commuting too.

Great idea. Burlington have turned many of their utility corridors into multi-use trails to great effect.
Here in Hamilton it would be nice to snag some of the excess space along rail corridors as well.

This is great - I'm actually working on a "real" cycling master plan that starts with all of the off-street path opportunities and branches out from there. All of the rail right of ways should be leased by the city and incorporated, plus all of the hydro corridors plus the pipeline trail. The opportunity to make Hamilton the most bike friendly city in Canada is ripe for the plucking, and it would cost less to implement than what we spend on roads EVERY YEAR.

While I laud the idea, I don't think it could happen for a couple reasons.

One, not all Hydro corridor land is public. Many are land-leases where Hydro leases the land only to run Hydro along private property. Another, the Hydro corridors in many cases are the only "natural" corridors left for wildlife to migrate between urban forests, and constant humans walking/cycling in these corridors might end that.

Lastly, you only need to read up about the whole debacle of the Meadowlands Conservation Area to know it'd be an uphill battle even in cases where its public property by the NIMBY crowd.

Love this idea! Lerfy has raised some challenges that need to be taken seriously - I especially want to see us respect the needs of wildlife - buying hope that with creativity and persistence this can become a reality.

I think a passive walking/cycling path would co-exist nicely with a wild-life corridor. In fact, this entire hydro corridor is already used by walkers. Just adding in a paved or granular path would open it up for cycling too. Toronto does this all over the city. It's a great way to connect areas through these natural corridors .

I should add, my wife is from Scarborough and I noticed last time I was there a nice new cycling path through the hydro corridor with signage and everything.

Apparently the feds funded it:

Ohhh! could we could put the LRT on this!

It's so nice and out of the way.

^ Great idea. Got Bob working on an article about this. Check out his blogsite later this week.

Can a trail be built beside a railway track? (Strathearne to Red Hill)

IMHO the city should be negotiating right now for trail leases beside every track that runs through the city. Hamilton has a HUGE opportunity for a complete off-street cycling network (to complement an on-street one).

Certain technical issues that would have to be addressed:

Hydro right of ways are generally for pipelines as well as overhead hydro wires. Clearances from every type of infrastructure in the corridor is generally a pre-condition to approval from the companies before any consideration for a trail. For example, some pipeline companies do not want any trails crossing their pipeline path at all. It makes devising an alignment challenging. Not impossible, but challenging.

Asphalt multi-use trails are not cheap. I didn't measure the total length of the proposal above but guaranteed that if it were to be built, it would either have to be staged or be funded out of a different pot of money than the existing cycling office budget (or that budget would need to be dramatically increased). I'm talking in the millions of dollars.

Just pointing out some of the potential pitfalls and challenges.

Hydro Corridors are perfect candidates for multi-use trails. Infrastructure Ontario (owner of the old Hydro One corridors) have programs in place to encourage municipalities to develop secondary usages for these corridors.

Asphalt is definitely out of the question for the majority of the trail. It's cost prohibitive from the get go. It would have to be gravel like all the existing rail trails in the City.

Hamilton has their Recreational Trail Master Plan, dated 2007, available to the public. Much of the proposed alignment was identified in the master plan. Identification is easy, implementation is the hard part. As with all City projects, funding is the major stumbling block. I believe only a small sample has been implemented to date. Namely the re-purposing of the old railway line linking Ainslie to Chedoke Golf Course.

"Asphalt is definitely out of the question for the majority of the trail. It's cost prohibitive from the get go. "

That's oldhamilton-think. Would we say that about roads? Never. This would be a bargain when compared to our roads budget.

The councillors who favour recreational trails in lieu of bike lanes should be all over this idea...