Construction could begin as soon as late October for this controversial landmark on Dundurn Street South.

The long awaited development of 220 Dundurn Street South, across from the Beer Store and LCBO, is one major step closer to being underway. 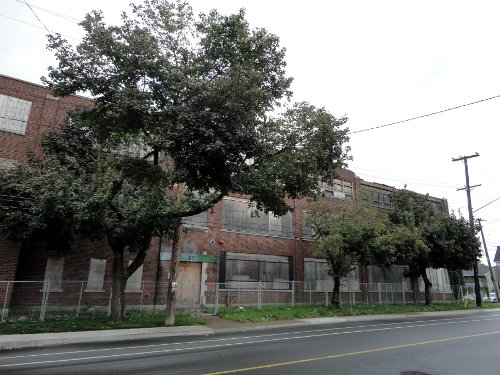 During a presentation to the Development Review Committee of the Kirkendall Neighbourhood Association, construction manager Deni Jankovic explained that this week will see the submission of the final site plan to city staff, with a building permit soon to follow.

Changes made by the developer to accommodate neighbourhood residents have been substantial.

The building will still be composed entirely of rental apartments, mainly one-bedroom and bachelor suites geared towards young professionals. However, due to the reduction of the building from five to three stories, there will now be 124 units, instead of the original 160+.

Developer Denis Vranich has also stated he is still committed to LEED certification for the building, specifically "Gold, for now" leaving the door open to possible changes down the road.

The main accommodations were made to the secondary building which, when built, would back onto the yards on the north side of Charlton Avenue West, just past Dundurn.

There had been considerable opposition to the original plan, which had proposed a five story wall of windows that would have been built less than three metres from the property line of the Charlton homes.

This secondary building's footprint has now been reduced, so fewer lots on Charlton will be impacted by its presence, and the building has been lowered to three stories. Vranich says he accomplished this partly by moving many of the suites to another part of the building, but also by having fewer units.

The city also requested major revisions for storm water management, including a capture and flow control system on the roof, as well as the already-proposed permeable pavers in the sizable parking lot. "We are managing storm water for the whole neighbourhood," joked Jankovic.

As all heating and on-demand hot water in the building will be electric powered, Vranich also expressed an interest in rooftop solar power, but was doubtful it could be incorporated into storm water management system.

The real surprise, though, was Vranich's announcement that while he will be building the ground floor for rental accommodations for the time being, he is pursuing a 'triple-A' commercial tenant for the ground floor. The reduction in suites has freed up a number of parking spots, and he is tentatively setting aside sixty of those spots for this tenant.

While unable to disclose who the hoped-for tenant is, due to continuing negotiations, Vranich hinted at retail, and explained that should he secure such a tenant, he would then return to the city to have the property rezoned to permit it.

This would re-open the public process, with further public meetings and opportunities for input.

Speaking with residents, including some who back onto what will soon be an eighteen month to two year construction site, many are eager to see the project begun, and completed as soon as possible.

They feel that while the proximity of the rental housing to their back fence is not ideal, it's better than a derelict building.

Once the site plan submission is made, the city has 21 days to respond with any desired changes. If none are requested, a building permit would be issued shortly afterwards. This could mean construction could begin as soon as late October for this controversial landmark on Dundurn Street South.

Update: updated to include plan renderings.

Half of this plan is better than a derelict building. But a massive parking lot? Once again Hamilton residents get scared off by the unfounded height boogeyman instead of focusing on the real design issues that require so much empty wasted land. This huge piece of land could have housed hundreds of new residents by building on most of it, with resident parking being underground or under the building on the ground floor around back. Please note this resident involvement once they start complaining about the night-time activity in the massive parking lot behind their homes. Having lived with a backyard facing a parking lot, I guarantee that's what's coming. I'm not sure who all is on this development committee but to ask for changes that result in more surface parking is laughable.

Hope to see a good retailer on Dundurn. That would be dynamite.

Great news (and scoop!) about the retail plans. Dundurn st is this close to having a really thriving retail community. Adding 220 to the mix will help fill in the gaps. This project is way too long in coming - I hope it turns out well.

Very good news. Though I don’t think one more retail space on Dundurn will be what transforms it into a thriving retail community (especially not with sixty parking spots dedicated to it). There is empty retail and commercial space on Dundurn at the moment.

Dundurn’s real problem is that it is unpleasant to walk along. It doesn’t have the same quality of building as Locke Street, but what really separates it is that Locke has multiple stop signs and lights to slow vehicle traffic, and foot traffic because it has relatively few parking lots. Dundurn’s traffic flow, on the other hand, is uninterrupted for 800 meters between Main and Herkimer (unless you count LCBO shoppers scurrying across the street to their cars parked on the west side).

I have heard plans for a light at Chatham and Dundurn, which would be excellent. This retail would be a fantastic addition. But the easiest and fastest way to help Dundurn thrive is just to slow it down a bit.

Finally! I've been waiting for this for how long now? 15 years? Longer, I think. It was at least 12 years ago that lofts were to be coming to that site.

The building will still be composed entirely of rental apartments, mainly one-bedroom and bachelor suites geared towards young professionals.

OK, I'll bite. What's the difference between a rental apartment geared toward a young professional and one geared toward retired people?

Marketing. But no doubt seniors will be welcome, and many will welcome somewhere in the neighbourhood to move to when they downsize from single family homes, although admittedly it would be more appealing to many of them if it were condos.

Wasn't there supposed to be some kind of dog park in the plan?

Hey, Kevinlove, the answer is very plain. About 40 years.

I'll believe it when I see it.

"As all heating and on-demand hot water in the building will be electric powered, Vranich also expressed an interest in rooftop solar power"

Electric heating and hot water is going to be expansive to the occupants.

the writer is a good order follower of the corps, isn't he.

Now now, Santo. Let's stay polite here. I plan to keep a VERY close eye on this development, and ensure that every promise is kept. Getting development done right is important enough that it's a key part of my platform.

Mr Allen, you are a fool buddy, as you have no idea who SCRAP is. You have made an assumption however you are wrong.

I am still waiting for your answer to my question a few months ago, as you boasted I get things done and I asked for real examples, which are still unanswered.

You are an order follower, definitely not a bold visionary, you are more of the same old cast, we need a new cast, which in my opinion is not you.

Mr Scrap. You are not on the Spec website. Please post your question and ditch the anonymity.