No Way to Know Whether Painted Crosswalks Reduce Injuries

The City is only releasing 'safe' data: data sets that can be used for fun apps but do not provide for any critical review of governance, policy, or finances.

Last year, the City of Hamilton finally decided that painting crosswalks - something common in every city - could maybe work in Hamilton. 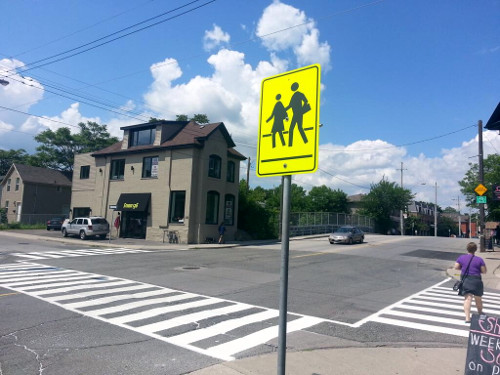 After years of claiming a lack of painted crosswalks somehow made the City safer for pedestrians, protecting the City from legal liability, the City changed its tune once residents decided to do the City's job themselves.

(But not before first trying to convince the Police to investigate the 'vandalism'.)

We don't yet know and we - the public - can't access the data to make an evidence-based assessment.

Why not? Because of jurisdictional issues, issues so absurd it can only happen in Hamilton.

City or Police: Hot Potato, Pass it On

The Hamilton Police Service collects collision data, including when pedestrians are struck.

The data is sent to City's Public Works department, where it is stored and analyzed. The police do not keep a copy.

I emailed the Hamilton Police Service last year to obtain the data. They referred me to the City.

The City, for its part, say they have the data, but they cannot release it because it belongs to the Hamilton Police Service.

Police approve releasing the data, provided any private information (the name of victims, license plate numbers, etc.) is removed from the data.

The City states they cannot do this, and - once again - that the data belongs to the police.

After lengthy back-and-forth emails, I'm told to file a freedom of information request to the City's Chief Secrecy Officer Freedom of Information Coordinator.

The City of Hamilton prides itself on having one of the worst freedom of information offices in Canada, charging ridiculous fees and claiming frivolous exceptions to frustrate the public.

For example, it will cost approximately $10,000 to get the City of Hamilton to release detailed Councillor expense reports for the 2010 - 2014 term.

Officially, the City of Hamilton is an open data city.

In practice, the City is only releasing "safe" data: data sets that can be used for fun apps but do not provide for any critical review of governance, policy, or finances.

City Council talks about access by design, fixing the City's toxic culture crisis, and about engaging residents (they use the term "citizens", but I use "residents" to be more inclusive).

However, for all the talk, the City is only taking small steps towards these goals.

If the City was serious about its statements, we'd have collision data available as open data, it would be frequently updated, and we'd be having an evidence-based discussion of civic policy.

Instead, we have inexcusable excuses of jurisdiction, a freedom of information office that's one of the worst in Canada, and a public works department that claimed until recently that making pedestrian crossing visible is somehow unsafe.

I'm having a hard time understanding this piece. Is it a jab at the city putting zebra crossings on the road? The lack of transparency? Problems you have with the FOI process in the city? A little from each?

Almost basic reading comprehension. You're getting better every day Downtown.

You're a winner too. You've added a lot to this conversation. A gold star for you!

The point of the article is that we should be able to access our own data to determine the impact of public policy.

Instead, we can't access our data is a jurisictional back-and-forth, and that being told to file an FOI at the City of Hamilton is equivalent to being told to go away.

There is no criticism of painting crosswalks, I'd like to be able to access data which confirms (or disproves) my assumption that zebra crosswalks are making Hamilton safer.

Thanks for your clarification, it is appreciated.

Don't worry, there will always be someone around here to hold your hand and guide you through these difficult concepts

Appreciate it, since you obviously can't help, Allen Taylor.

Where I work we have a saying: "If you can't measure it, you can't manage it."

The private sector understands how important data is to drive correct decision-making.

The City of Hamilton? Sigh....

Can you clarify how "The City of Hamilton prides itself on having one of the worst freedom of information offices in Canada, charging ridiculous fees..."?

From my understanding, those fees are mandated under Reg 823 of the Municipal Freedom of Information and Protection of Privacy Act and the Act dictates the expectations of municipalities in responding. In which case the issues would arise with the Act itself as opposed to a municipality's implementation.