Debris from the bus shelter was thrown over 30 metres onto the lawn of a long-term care home across the street, and glass covered the entire intersection.

Hamilton Police say charges are pending against the driver of a vehicle that destroyed a bus shelter on Main Street near Victoria on July 5, spreading debris across the intersection. 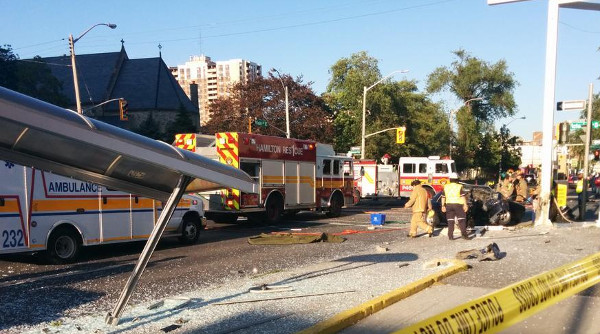 Scene of the crash on July 5

The collision happened around 7:15 PM with dozens of witnesses at the high pedestrian central Hamilton intersection.

Thankfully, no pedestrians were struck at the busy intersection and the driver received only "very minor" injuries. 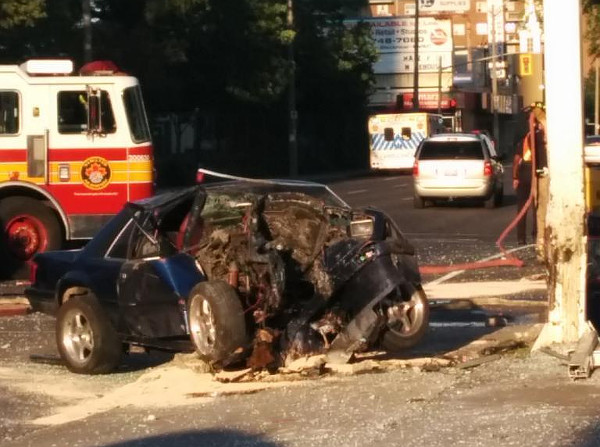 Debris from the bus shelter was thrown over 30 metres onto the lawn of a long-term care home across the street, and glass covered the entire intersection. 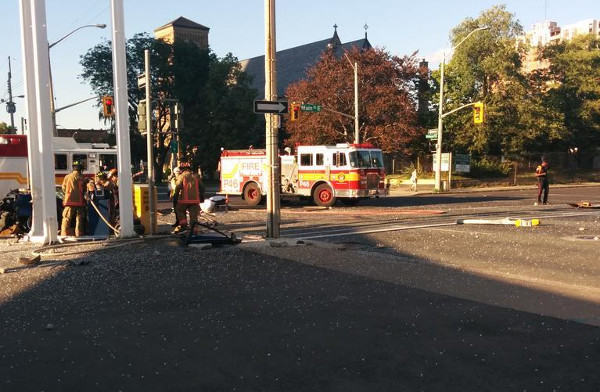 Glass and debris were scattered widely

Police say alcohol was not a factor in the collision and they do not believe any other vehicles were involved.

The intersection of Main and Victoria is the cross-section of two urban highways and a site of frequent serious collisions.

Collision barriers are installed on the northeast corner to protect the school playground. 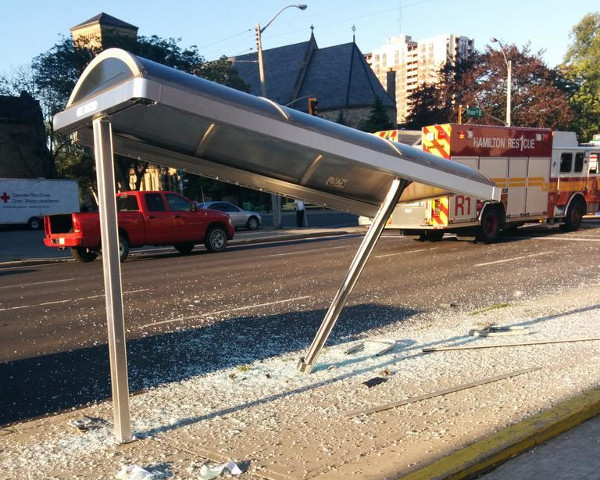 All that remains of the bus shelter

Some would say that speed is not a factor. Speed may not be THE factor, but it is a factor in this case; witness the extent of damage. Drivers actions are almost always THE factor. However, multi Lane roads encourage expressway type driving (frequent lane changes etc.). If you want to see what I mean, drive East on Wilson St. (two way section) to Victoria where it then converts to one way. Drivers at this point increase speed and revert to the expressway type of driving, that has no place in an urban environment.

This was a case of someone driving a car too powerful for their abilities at a speed they couldn't handle. The road is irrelevant. That particular car is capable of accelerating very quickly and it is also capable of getting very squirrely in a hurry if you hit the gas too hard. This shouldn't be an opportunity to bitch about the roads, call it what it was, a bad driver made a bad mistake. It could have easily happened on a regular residential street with that particular automobile.

Sorry; why is this relevant on RTH?

Is it because of the 'excessive speed' element vis a vis slowing down our traffic towards more complete streets? I'm going to assume that it is. So I feel obliged to point out that the issue is the driver. Just as the spate of school (and elsewhere) mass killings in the US over the past half-decade is the result of mental health issues, not access to guns. (Even though, unarguably, that gun access takes the situations to a much worse level of tragedy.)

I strongly believe in a reduction of residential speed limits. The area in which I now live cries out for 40Km/hr limits, perhaps even lower than this because of the innate tendencies of people behind the wheel (myself included) to drive above the limit, no matter the environment. (The 'Why?' here is another conversation entirely.) And I am against our inner-city thoroughfare roads. But to me, the highlighting of incidents such as this one as a 'news item' for the –perceived– purpose of galvanizing people towards demanding change falls far short of the behaviour necessary to attain more humane streets.

It makes perfect sense to highlight this incident in support of re-designing Main Street. Main is designed to encourage dangerous speeds, period. It's a five-lane one-way straightaway with timed green lights straight through to Stoney Creek. It practically begs people to speed and jostle for position, and man, do they ever. It's like NASCAR. I actually believe the city is criminally negligent for not re-designing Main Street. And if those pictures don't make the case, what will? I mean, look at that car. Look at that bus shelter. That's my neighborhood. My kids went to that school.

I've raised it before and I'll raise it again: How can we sue the city on the issue of dangerous streets? Thankfully no one dead this time. But how many have to die?

Sure, you may be correct in pointing out that driver error was largely responsible for this.

The problem is, this type of driver error occures all too frequently in this part of the city. The results are horrific. And just think about the fact that in a residential area, near a school playground, it was deemed necessary to install concrete collision barriers to protect children as they play.

In any normally functioning city, such things are unnecessary.

It's been proven that people resond much less to lowered speed limits than they do to engineering that is designed for lower speeds. Part of the problem is a society that has normalized the practice of driving at 10-15km/h over the legal limit, a practice that in an inner city environment like this one, results in average speeds that are 20-25 km over what is considered safe. And since that is an average, there is always a small percentage that is much faster, more dangerous and threatening.

Bollards are good. Vehicles are crashing through store-fronts on a semi-regular basis as well. Bollards should make a comeback in architecture when businesses and streets are being designed.

This guy should have wrapped his car around bollards. I went pale at the thought of a family standing in that bus shelter at the time.

Charges ... meh. Hope so. Cynical me says they'll give this idiot his license back and a new car. If there had been a family in that bus shelter this poor guy would have had to pay the entire $500.

I appreciate those in this city who keep bringing this issue forward for change. In fact we must change the mentality that the car driver rules the "world". The other day while crossing in the crosswalk, with the light, a vehicle like a Hummer was in the crosswalk waiting to turn right. I stopped at his door and stated in your in my way, since I have the right to cross. The driver told me to go around him, which meant I had to go out into the new bus lane in order to finish crossing the street.

The driver of the vehicle yelled out his window as he turned after I had to walk in front of his vehicle in the bus lane that I was " a lazy, ignorant, effin white bitch".

redesigning the streets and spending billions will not change this goofs mentality.

Nobody has said that. I love how we swing from absolute edges of the spectrum during this "debate".

Whatever. Who are you and what have you done for this city? That's what I thought. Just another anonymous naysaying loser who takes joy in hamilton being depressed