Time to Abandon a Failed Theory of City Building

After decades of applying the theory that economic development in downtown Hamilton depends on making it easy to drive, the verdict is in.

The theory is that economic development in downtown Hamilton depends on making it easy to drive. Councillor Terry Whitehead made it again today in an opinion piece for RTH in which he wrote, "Our strategic plan is to create a greater residential and employment density in the downtown. Many of these functions will rely on easy and accessible transportation for employees to attend work from outside of the downtown core." This theory is an instance of the more general theory that if the downtown is to be successful, it should behave as much as possible like a suburb. In Hamilton, we've been living with the application of this theory for decades. 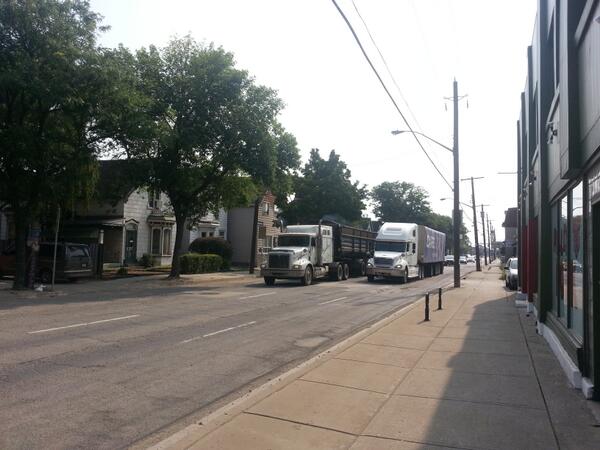 57 years into this economic development program, here's how things are looking:

In other words, our ongoing effort to attact economic development downtown by making it easy to drive has been an abject, catastrophic failure.

Last week, in a cheeky rant, I wrote that no councillor, in 2013, has an excuse not to understand how cities actually work.

We know what makes downtowns successful, and we know damned well it's not easy automobile access. It's:

Combined together, these urban development principles produce what has come to be understood as the essential economies of cities: economies of scale, agglomeration, density, association and extension. Each urban economy contributes to the economic development of the city: scale divides fixed costs among larger markets, agglomeration clusters talent and resources and raises productivity, density reduces transportation and infrastructure costs, association makes collaborating and innovation possible, and extension allows urban businesses to expand into new markets and cities to share innovations.

These economies are why cities are the engines of economic innovation and development: why they produce new ideas and businesses and industries and create jobs and generate the wealth that pays for the urban - and particularly the suburban - infrastructure we have come to expect.

When suburban councillors demand that we sacrifice density, mixed use, walkable streets and high quality transit for the false panacea of easy driving, they are really asking the city to kill the golden goose that makes their chosen lifestyle possible.

Hamilton has no future as a glorified bedroom community. We need to activate our own urban centre to be an economic driver for the whole city. As Indianapolis Mayor William Hudnut famously said, "You can't be a suburb of nothing."

IF the status quo conditions are so great, why do we keep having conversations about renewing the city?

Beyond the status quo issue, this is one of those cases where there are false dualisms at play. It's either drive or not drive. Choosing both is not an option. It's either urban or suburban interests, not both. No one is saying that everyone in the city should live downtown in a dense urban environment. If residents on the mountain like their suburban environment, fine. Why not make the city work for a variety of people, not just a select few? Providing options creates diversity, increases resilience, etc etc ad nauseum.

Mixed use... you mean like a Michael's, Best Buy and a Walmart all in one easily drivable complex... right?

Thank God for Terry Whitehead's logic. Rare at RTH I know. He should run for Mayor!