Lack of Heritage Designations Not Reasonable or Understandable

The problem is not the complexity of the task, but a lack of political will.

By now you have probably read yesterday's depressing Spectator editorial on heritage designation, which basically serves an apology for City inaction and downtown speculators. 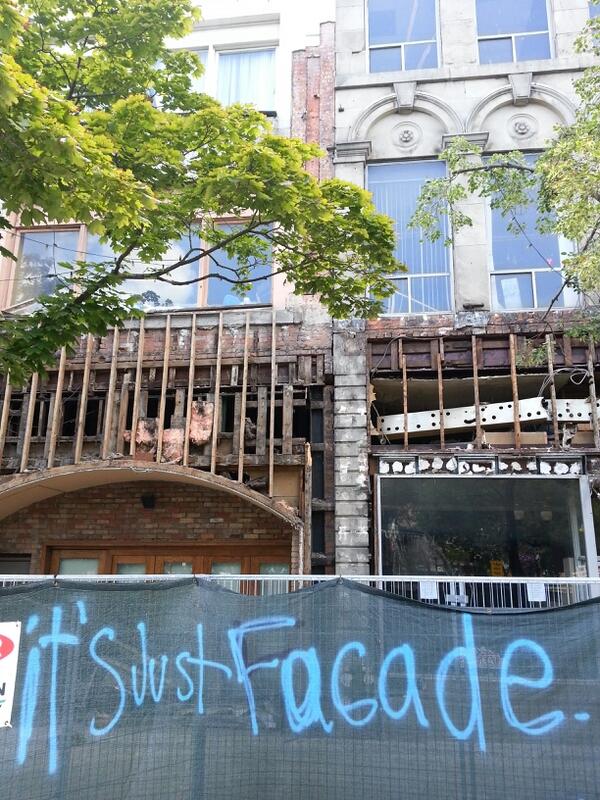 The idea that no heritage designations in five years is somehow a reasonable and understandable outcome of a prudent bureaucracy and city Council, and that it doesn't mean the City doesn't value heritage, is laughable.

All we need need to do is compare our record with those of smaller neighbouring cities like Oakville, as well as other Ontario cities like Ottawa - let alone places that really value their heritage like Paris or London. (It is important to remember that even in the UK, with a much longer history than us, over one third of listed buildings are 19th century or newer.)

The claim that heritage designation is a highly technical and difficult process that involves huge amounts of staff time doesn't stand up.

We went through the process of having our house designated [PDF] in 2003. The process required one site visit, a bit of background research and a couple of pages of descriptive write-up.

The "reasons for designation" staff report is less than 800 words. I could have done it myself in an afternoon, and I can't imagine the whole process would take more than three or four days of work for a trained staff member.

Nevertheless, when I followed up after not hearing anything for over six months I was surprised to hear that the process was slow due to the high work load - three designations that year!

Three designations a year would seem a very small number for a city of over half a million that is almost 200 years old.

As Councillor Brian McHattie said last year, "There are far too few City staff in the heritage planning department so any request for designation takes one to two years to process. Consequently there are properties waiting to be evaluated with report dates into 2015-16, hence a hesitation to add many more given the timelines."

If council supported heritage, McHattie said, "more money could be added to the department to get this done. The Planning Department knows Council has no interest and therefore do not take any more action than they need to - having been shot down in flames at the Planning Committee many times."

Please indulge another anecdote to help underscore my point. A few years after our house was designated (at our request and after much follow-up from me) we were told at a ceremony in Ancaster that our house would be given a plaque.

Over a year later the plaque still hadn't arrived, so we followed-up again. The City contacted the plaque maker and we set a time to install it.

When he arrived for the job he said his workshop is full of uncollected historic designation plaques! I'm pretty sure that if we had not followed up, we would never have gotten the plaque and it would still be gathering dust in the plaque-maker's shop.

One interesting thing in the editorial is that it credits the Spectator for reporting that the city has not designated any buildings in five years. But CBC Hamilton's Paul Wilson already reported this back in June, and RTH has been digging into these heritage issues for several months.

The worst part of the editorial is that it rehashes the false claims that heritage designation is necessarily costly and deters investment. Heritage preservation can sometimes be more expensive, but it actually delivers a strong return on investment. It reflects an approach to property management that is based on creating value, not cutting costs.

The editorial also predictably warns, "we can't save everything," as if the great danger in Hamilton is that we are preserving too many buildings. Here in Hamilton, only 61 buildings have been individually designated - and we lose several heritage buildings every year in the downtown core alone.

We can't even manage to protect unique pre-Confederation buildings in the most visible part of the city: Gore Park. By way of comparison, 2 percent of the entire UK building stock is listed, or about 500,000 buildings!

I wish you would give this a rest. While real developers have invested in fixing up their old buildings downtown to make them beautiful again, Blanchard has sat on it's buildings - the ones it didn't already demolish to make room for parking lots. Knocking a perfectly good building down with no plan to replace it may be "doing something there" but it's not something GOOD.

Give it a rest ! thats wright i did not say to take it down and make a parking lot with it far from it to save it if they can`t well hope they will make somthing like it at least . we have way to many parking lot in this city peoples should start walking more these days

Unfortunately I think you've got this a little backwards, in the eyes of city hall. Real developers make campaign donations, small time developers have invested their heart and soul in fixing their buildings, and saving downtown hamilton from becoming an empty parking lot.

If only the author of that spec editorial could give even one piece of data supporting the claim that a heritage designation can needlessly slow investment. Its plausible, but where is the data to back it up?

" A study of almost 3,000 varying properties in 24 Ontario communities concluded that designated sites are not hindered by their status. 59% of designated heritage properties had higher than average property values for their respective areas, while 15% were equal to average. Even during the downward real estate trend, designated heritage properties did not suffer due to their recognition. 47% of properties increased in value during the downward trend, whereas 32% performed the same as average. With accessible financial support programs and successful real estate performance, heritage designation is definitely a smart decision for property owners."

The data doesn't exist because it points the other way.

You know what, I can agree with every point in the editorial and still think that the city is completely failing to take care of good heritage properties.

This is a 200 year old city, and we designate functionally nothing. That's not "proceeding carefully" - it's not proceeding at all.

This is like pointing to various hazards of over-eating as a defense of anorexia. The city shouldn't throw heritage designation around willy-nilly, of course - but it's usage should be greater than zero.

The Spectator continues to be disappointing. I stopped reading here: "Yes, it is important to save as much of our built history as possible, but at what cost?"

How can someone write that and not be embarrassed? First, the editorial begins with the recognition that "it has been five years since the City of Hamilton has protected a building through a heritage designation" meaning the city is not protecting ANY heritage properties. And then "at what cost?" What is the cost of having failed so miserably to protect heritage properties?

The Spectator always works so hard at trying to sound reasonable from the development community's back pocket and just ends up sounding stupid and ill-informed for a newspaper.