There are Better Solutions Than Demolition

City Council needs to call a halt to the planned demolitions on Gore Park, at least until the developer can present a real plan for the site and get input from the public.

It is a terrible shame that City Council would allow the demolition of heritage buildings without any knowledge of what will replace them, or when. 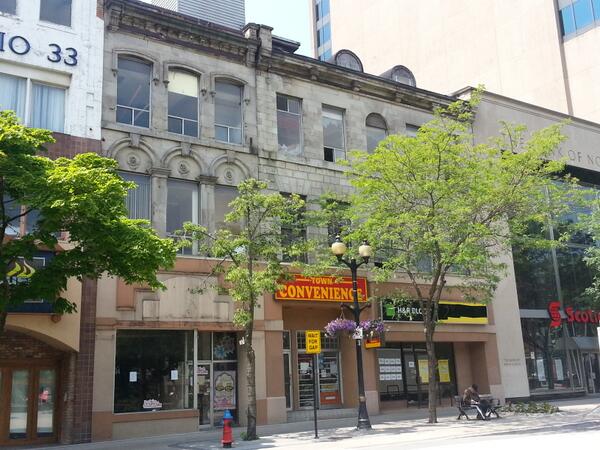 We don't really need another demolition mudhole facing Gore Park like the one Wilson-Blanchard already created at 30 King Street East. Nor do we need another tasteless concrete-and-glass monstrosity where beautiful historic buildings used to be.

City Council needs to call a halt to this demolition at least until the developer can present a real plan for the site and get input from the public. This is not simply a 'business' issue: It's a matter of civic responsibility.

Unfortunately, the developers do not feel this way. Robert Miles, senior propery manager for Wilson-Blanchard, recently sent me an email reply stating they are "waiting for people like you to put your money where your mouth is if you want to pay to maintain these relics".

He added, "If we could make money with them we would not be going to all the headaches to take them down," but that they are going to maintain the facade of 18-22 "if possible".

I encourage Wilson-Blanchard to consider the business case as experienced in Toronto and reported by CBC Hamilton's Paul Wilson in May.

He quotes Ryan Love of E.R.A. Architects, referring to a row of vintage storefronts: "From a sales standpoint, it's a large benefit to have these authentic structures."

I encourage City Council to reconsider heritage designation for 24 and 28 King Street East and halt demolition, especially in light of Wilson-Blanchard's intent to leave the site vacant for several years, and their lack of clarity on what we can 'eventually' expect in that critical Gore Park streetscape.

The vacant lots will actually interfere with the City's current efforts to populate the Gore Park Promenade and activate the city centre.

These early Canada facades should be saved, and the buildings facing Gore Park should not be left empty for several years at this critical time.

Frankly, I wouldn't want to be in their shoes, and I can't quite comprehend how they've allowed this to evolve in this manner so totally counterproductive to what they're otherwise actively trying to accomplish in the Gore.

I am sure there must be better solutions.

Connie Kidd is a retired educational researcher who lives in downtown Hamilton.

Well it's better than empty mudholes, but yes it's irresponsible of the developer to leave these historic buildings vacant while they decide what to build there. There should be a plan and public input before any approval of demolition.

I encourage those interested to - contact your councillor, find out whether they voted for demolition and express your opinion. - contact developers Wilson-Blanchard wbm@wbmgnt.com - *Attend July 10 public mtg of Downtown Hamilton Built Heritage Inventory group https://www.hamilton.ca/NewsandPublicati...

"waiting for people like you to put your money where your mouth is if you want to pay to maintain these relics".

Ouch, harsh. I guess you have to uhm, admire his honesty???

Yes it certainly makes it clear that WB isn't the developer we need to preserve and enhance that Gore Park block. The disrespect for heritage buildings is disturbing.Other developers are attracted to Hamilton because of the opportunities to work with heritage buildings. Unfortunately, WB owns pretty much the whole block, and acquired it over many years with the intention of knocking it down.

And City Council did nothing.

Dave Blanchard continues to destroy our Downtown. I can only imagine what this strip of buildings could have been had he taken pride. How naive of an organization Wilson-Blanchard must be. Prime heritage real estate in the heart of the city. Desirable buildings. These properties are in usable/repairable condition. All of them qualifying for the cities Gore Park Incentive Grant Program. Blanchard could receive a $50,000 matching grant from the City for any interior or exterior work done to the buildings. Free money? Where else does this happen?

Out of sight, out of mind. With the buildings demolished, Blanchard can take comfort. A fresh slate, a clean diaper. He will no longer have to think about years of lost rental profits on these properties while he stood by and soiled the sheets. But wait, "maybe we'll save a couple of the facades". Thanks guys, theres nothing quite like sticking the head of a pig on a pike for all to see when the roast has concluded.

Saving the facades in memoriam should not be a trade-off for allowing demolition. The value is IN the building, how the space feels when you are inside, how it sounds, the interaction with the street scape. It is very discouraging to know that one of the City's "leading" architecture firms were even housed in one of the buildings, and have assisted Blanchard with renewal concepts. In a perfect city, an architect advocates for the preservation of the works of those who have come before, at all costs. To ponder demolishing ones own office must be absurd. Is it still an achievement if you have to destroy another's to create it?

I find it very disturbing that Blanchard can be so reckless with our history, and that our council will allow it. The buildings have stood the test of time. Blanchard will be gone soon. His lack of ownership should be a punishable offence, as it has punished the Gore district to near extinction. At the turn of a renewing era, he is back to kick Hamilton where it counts. But please, no explanation of how Blanchard has been a valued Heritage advocate for this city. His most noted properties on three corners at Main and James, sit in silent decay, collecting pigeon droppings, awaiting responsible ownership.

Mr. Blanchard please sell these buildings. There are people who will buy them and use them. Then leave town. Regards

David Blanchard doesn't "own" the Pigott Building. It's owned by the condo owners through their corporation and has simply been managed by his company over the past few years. Wilson Blanchard had nothing to do with the original restoration of the building nor its conversion to condos a number of years later.

And the Pigott / Sunlife complex is certainly not sitting "in silent decay". In fact, over $800,000 was spent on restoration just last year, completely financed by the condo owners (not Mr. Blanchard). And further heritage work is being planned over the next few months.

They are better solution, then demolitions .lol it s called MONEY !!!!!!!

Yes "conrad" ... we know you're threatening demolition to blackmail city council for taxpayers' money to pump up your profits. However, preserving the heritage buildings will pump up your profits too. It isn't necessary to hold the public for ransom, and frankly you are convincing a lot of people that you're not the right company to be doing business in our town. However, your deteriorating professional reputation is your problem.

City needs a design committee in the worst way...the building that comes to mind is the vault that was built in Hess totally out of character to the street and already and eyesore...formerly known as "Rockbar"

" The demolition of two 19th-century buildings beside Gore Park will begin within two weeks as part of a controversial deal between the city and a developer to restore three properties and destroy two others.Developer David Blanchard, of Wilson Blanchard, says the demolition of 24 and 28 King St. E. will take at least three weeks to complete. During the work, he expects the sidewalk will be closed but the street will remain open."We are keeping up three buildings and taking down two," said Blanchard, whose company has received a demolition permit from the city. "We are going ahead with everything we agreed to with the city." "

THEY THINK THEY'RE TAKING THE BUILDINGS DOWN !

Just out of curiosity GoreFountainBather, if the value is IN the buildings, when was the last time you were IN these buildings? Of course, a historic building should be preserved where possible, but it has been written in previous articles that these buildings were previously modified (prior to this ownership) which destroyed the interior heritage aspect of these buildings. As for the mere $50,000 grant for restoring, how far would that go in a project this size? I think you underestimate the cost involved otherwise the city would have jumped in long ago. These buildings don't just need a lick of paint and some new wiring. As for the "feel" of the space inside and how it interacts with the streetscape, how does any space feel that is extremely long and narrow since these are all separate spaces with not much natural light? In my opinion these buildings are beyond any kind of rejuvenation/ renovation but hopefully the developer can keep or recreate the facades to keep the same exterior feel of this streetscape. No one wants to see a "hole" in the downtown core but after doing my own projects I can understand that working with the city for approvals takes time, sometimes years for a plan to be approved.

Excuses excuses. Lots of old, narrow, long, etc. buildings downtown have been restored by people with a lot less resources than Blanchard and are profitable. What makes the Gore buildings heritage buildings isn't some pristine state of never being altered, they've grown and changed and evolved as part of their environment. They're heritage buildings because they're part of the fabric of the Gore with a long history of being important to the community and changing as needs change. They could easily change again and stay important, keeping the historical link while fitting into a modern downtown, just like lots of other buildings just as old, just as narrow, just as run down, just as (insert excuse here). All that's missing is an owner who CARES about their heritage value. Instead we'll end up with an empty hole for however many years, and then MAYBE a bland box like every other bland box in the world. People want to live in downtowns because they are REAL PLACES with their own distinctive qualities. Old buildings are part of what distinct quality - the more they've been altered over the years the MORE important they are because they've evolved in a way that is unique. Make no mistake, I mostly blame the city here, the developer is just doing what makes sense in a city that doesn't care about heritage and won't help him do the right thing. But let's not pretend it's a good idea or that there are no good alternatives.