The 3rd annual Mike Ride, a fundraiser to provide bikes for families in struggling neighbourhoods and make Hamilton a more bicycle-friendly city, will be on Sunday, May 5, 2013.

On Sunday, May 5, 2013, the Bike for Mike charity will hold its third annual Mike Ride, a fundraiser to provide bicycles, locks and helmets for students and their families in struggling neighbourhoods. 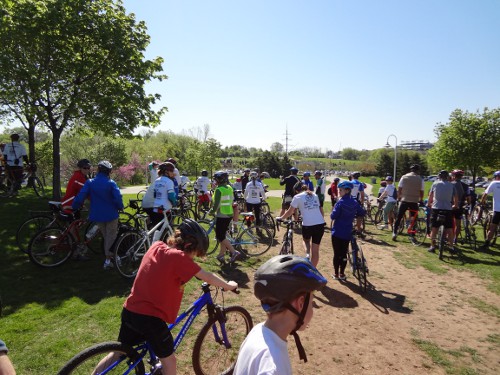 Bike for Mike was started to honour Mike Chamberlain, an avid cyclist who died on May 29, 2010. Mike dreamed of making Hamilton a bicycle-friendly city, and the annual Mike Ride is an ongoing effort to realize that dream.

Participants can sign up for one of three rides, all of which start at Bayfront Park:

Riders of all ages are required to wear helmets, and bikes must be street-legal with reflectors and a working bell/horn/gong. The ride will proceed rain or shine, so dress appropriately and bring sunscreen as needed. Longer routes include a pit stop at the halfway mark, but be sure to bring water.

The routes are on a combination of trails, bike lanes, bike routes and mixed traffic, and streets will not be closed for the event, so riders must obey the Ontario Highway Traffic Act.

Remember also that the Mike Ride is not a race - take your time and go at a safe, comfortable pace.

What You Can Expect

Last year, my then nine-year-old and I did the 20 km ride, and it was a most enjoyable ride - fun and not technically challenging. I was impressed at how much of the route was on dedicated bike lanes - the city has been slowly, quietly filling out its bike lane network.

Here's a video of last year's ride, produced by Bike For Mike:

There were around 300 participants last year, and the organizers hope to double that for this year's ride.

Im there and il brings lots of my friends with me and there friends as well :)