At 2:30 PM today, Hamilton will play host to a state funeral for Lincoln Alexander. 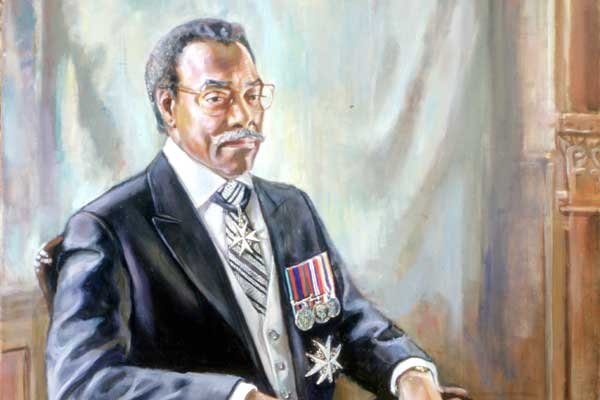 Alexander died last Friday at age 90. His body lay in repose at City Hall from Tuesday to Thursday.

The first black partner in a Canadian law firm, Alexander would go on to become the first black Member of Parliament in 1968 (watch the CHCH vintage footage), the first black Minister when he briefly served as Minister of Labour in the Joe Clark government, and the first black person to serve as a viceregal in Canada when appointed Lieutenant Governor of Ontario in 1985.

On retirement as Lieutenant Governor, Alexander involved himself in many activities, especially in Hamilton, that made him even more beloved. (Read The Spectator's 2002 profile of Linc by Bill Dunphy.)

CBC, CTV, and Global are all offering webstreams.

12:15 PM - Main Street will close to all traffic at Bay Street and remain closed until John Street. King Street is to close at John Street to Bay Street as well.

1:00 PM (approx) - The procession is scheduled to arrive at Hamilton Place. Details of ceremonial aspects has not been released.

1:15 PM (approx) - City of Hamilton staff will distribute tickets to members of the public lined up in Commonwealth Square on a first-come first-served basis.

2:00 PM - Doors at Hamilton Place close to the public

David Peterson, 20th premier of Ontario (1985 to 1990). Alexander was Lieutenant Governor of Ontario during the Peterson premiership.

This article was first published on HamOnt.ca under a Creative Commons Attribution-ShareAlike 2.5 Canada (CC BY-SA 2.5).