Events like Lion's Lair not only help to showcase young businesses, but also bring more attention to the potential for Hamiltonians to become entrepreneurs and start transformative new businesses.

Hamilton's resurgent enrepreneurial spirit was on full display at last night's Lion's Lair gala, a celebration of innovators and a competition for $100,000 in funding and services for the top three entries.

A panel of five "Lions" evaluated the ten finalists not only on the viability of their businesses but also on the potential economic impact for Hamilton if the business succeeds.

The Lions brought a wealth of their own experience in entrepreneurship and business development.

Lion's Lair was created by the Hamilton Chamber of Commerce and Innovation Factory, a not-for-profit Regional Innovation Centre with the mandate to foster innovative entrepreneurship in Hamilton.

Any of the ten finalists have the makings of a successful business, but the Lions selected the following three companies for the top prizes.

The top prize of $50,000 in cash and services went to Dunlea Farms a family-owned business, to support Tidy Feeder, a dense boxed hay feeder for small pets that fits inside the animal's cage and reduces the mess from conventional bags of pet hay. 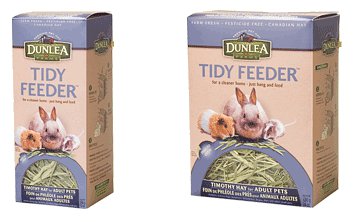 Proving that innovation isn't restricted to high tech, Dunlea has a real chance at capturing a significant share of the continental pet food market and growing a strong business with a tight connection to Hamilton's agricultural economy. This is a great product (I was thinking of the constant drifts of loose hay around my son's hamster cage) with slick packaging that can really benefit from a capital investment in scaling up their manufacturing and distribution systems.

This also helps to sustain the hay business at a time when horse racing is in serious decline.

The second prize of $35,000 in cash and services went to REfficient, a B2B company that allows businesses to find buyers for surplus equipment with the tagline, "Go shopping in other companies' surplus inventory".

The business combines a commitment to environmental sustainability with an audacious ambition to become "the world's sustainable marketplace". Their goal is to divert a billion pounds of unused product out of landfill by 2017.

The third prize of $15,000 in cash and services went to nascent start-up Nervu, an advertising business in which people sign up to receive text notifications when their favourite brand vendors have a sale or promotion.

The founders, ambitious McMaster students Mohamed El Mahallawy, Bilal Husain and Shawn McTigue, are from various cities around the GTA but met at school and are committed to grow their business in Hamilton.

The other seven finalists did not win prizes, but they are all viable businesses with potentially big reach.

A cross between catering and grocery delivery, dinnerlicious! provides pre-portioned groceries and simple recipes so that busy families can enjoy fresh, healthy and tasty meals prepared at home.

The business partners with Hamilton farmers to bring fresh local produce to Hamiltonians in an easy-to-prepare format.

Enthuzr is a service that provides businesses with turnkey social marketing so that customers can easily support and recommend the business among their personal netowrks.

New Attitude creates custom prostheses for women with breast cancer who have undergone mastectomy. The breast prostheses are custom fitted to the woman's chest and are made of lightweight, comfortable material that matches the woman's shape and skin tone.

Exactly what it sounds like, Ontario Bamboo grows and markets bamboo plants that thrive in the southern Ontario climate. Bamboo grows quickly and has tremendous diverse uses, from beer and sports drinks to soil remediation and carbon sequestration.

Snappay provides small retail businesses with an affordable way to accept credit card payments via customer smartphones. Customers sign up for free on Android or iOS devices (a Blackberry app is coming soon) and can pay with Visa, Mastercard American Express, Discover or PayPal.

With off-the-shelf hardware and their own web service, Synxer provides you with a management system for your smart home. Using your smartphone or tablet, you can unlock and lock doors, turn lights on and off, brew a pot of coffee, start cooking a roast - the opportunities are wide open.

Weongozi combines cognitive psychology with artificial intelligence to create Libretta, a software service that analyzes writing to determine the writer's motivation and help you craft an effective response.

It was exciting to attend the event last night and feel the energy of Hamilton's emerging entrepreneurial culture.

Cities are centres of innovation almost by definition and foster economic development through the essential urban economies of scale, agglomeration, density, association and extension. However, for too long Hamilton has behaved not as a dynamic city but as a bedroom community anchored by a few legacy industries.

We're one of the ten biggest cities in Canada, and it's time we started acting the part.

Instead of trying to woo established companies to consolidate their existing operations here, we need to focus on creating the most fertile conditions to foster the young, high-growth companies that generate value and create net employment gains.

Events like Lion's Lair not only help to showcase young businesses filling this role, but also help to bring more attention to the potential for Hamiltonians to become entrepreneurs and start transformative new businesses.

It was great to work on this production last night and I have to say it made me proud to be from Hamilton. Apart from looking very professional...this was an excellent evening and all 10 finalist deserved to win. Congratulations to the crew I worked with and all 10 finalist! FYI You can catch the show on cable 14 Friday night and throughout the weekend.

shudder so many buzz words. Why are business people so slimy?

Also the #hamont love-in from all the participants was so fake I seriously LOL'ed. Come get your SMS spam and rabbit food in a box! HAMILTON IS REALLY UP AND COMING PEOPLE.

Check out Snap Pay, a PayPay reseller, because you need another middleman between you, your bank, paypal and the merchant.

BUT YOU GET TO USE YOUR PHONE OMGWTFBBQ!!!1

The prosthesis is pretty cool though.

Lion's Lair is a great initiative for Hamilton. It is time that we recognize the various tech talents in our city, and also that almost all new business growth in the coming years will come from small businesses. Whatever we can do to support and encourage them beyond the basic offerings of our Small Business Enterprise Centre at City Hall should be really welcome. Bring on the diversity of industry!

What is with the cheerleading? Growth will come from competitive businesses. Coddling lame-duck businesses with uncritical Hamilton boosterism will just keep us stagnate. This whole thing is such a farce.

This is a great initiative. It is hard enough establishing a new business. Getting a little pat on the back from time to time sure helps.

On the other hand RTH's constant harping about the evils of any established business (pollution, urban sprawl, evil football teams, etc...) does not contribute to encouraging new entrepreneurs to stay in Hamilton once they begin to achieve some success.

The reason everyone loves "entrepreneurial" new businesses, but hate greedy evil existing businesses, is because the new business does not have customers to under-serve, employees to mistreat, products to fail, or polluting factories, so there isn't (yet) anything to criticize.