Dralion is a study in exuberance and dazzling verticality: a thematic melange that strings together one superlative performance after another.

I've never been quite sure why it's called "Cirque du Soleil" (Circus of the Sun), when the productions overwhelmingly tend to be lurid and phantasmagoric in their lighting and set design. Dralion, the current production playing at Copps Coliseum, is similarly unearthly, but it feels more joyful and uplifting than any show I've seen in the past few years.

Dralion was first performed in 1999 as a Grand Chapiteau (Big Top) show, but has recently been revised to take advantage of the added size and height of an arena. 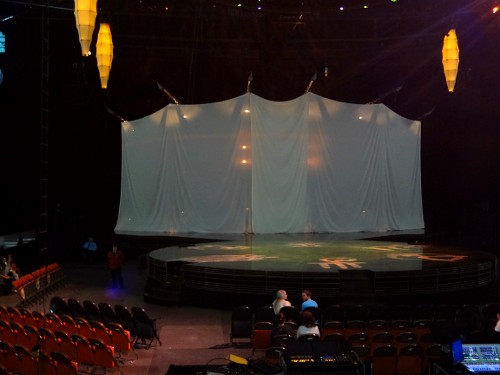 The stage before showtime. I was promptly advised that the use of cameras is strictly prohibited at Cirque du Soleil.

The overhead rigging holds three large concentric rings, the centre-most of which can be lowered and tilted. This is used to excellent effect during the aerial ring and aerial silk acts.

The main stage is a large green circle, with trapdoors that open and platforms that rise and fall. Behind it is an impressive 8 m (24 ft) tall structure festooned with bars and hand-holds (behind the white curtain in the above photo).

Some Cirque performances turn around a narrative - albeit a slender one - but Dralion is at best loosely thematic: East meets West. In practice, this means the music and costumes are a grab bag of Chinese, African, Indian, Polynesian and European influences, and the strongest thread of continuity running through the two-hour performance is the clowns.

The eponymous Dralions are two-person dragon/lion costumes that appear early on and do some amazing stunts later on, using large, heavy balls and a teeter-totter. 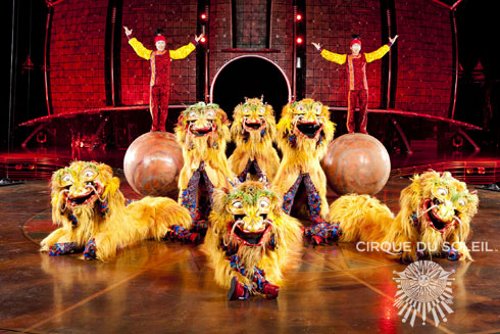 The principal characters are supposed to represent the four elements, but I didn't catch that during the show - I only found out when reading about it afterward. It really doesn't matter, though. You go to Cirque to see incredible feats of balance, strength and grace, not for a strong literary experience.

Like most Cirque productions, Dralion soft-starts with three clowns walking among the floor seats before 7:30 PM and interacting with the audience to hilarious effect.

I don't want to give away too much of the performances, but an acrobat on a crossed wheel - sort of a three-dimensional hula-hoop - sets the stage for an evening of gasp-inducing superlatives.

One of the more compelling acts comes early in the show, as Basile Dragon, a performer with an almost insectile bearing, alternates between balancing and juggling an ever-increasing number of large, egg-shaped balls.

An awesome sequence involving two large trampolines and some parkour-inspired feats left my toes curling and my gut churning.

A well-choreographed act with several diabolo-bearing jugglers - in bizarre costumes that crossed a '50s diner girl with an Asian school girl, plus a dash of Cyndi Lauper - inspired hearty applause.

A gorgeous, astonishing romantic duet on aerial silk highlighted another theme that seemed to run through the production: the unrequited longing for an unattainable woman. Azala (Amanda Orozco), who represents air, is romanced by a blue-clad suitor played by Lorant Markocsany; but as the song ends, she slips away into the air out of his grasp.

A large group performs an increasingly elaborate and awe-inspiring series of hoop jumps that builds to a mind-blowing final leap. That, in turn, is followed by a brilliant large-company skipping sequence.

They follow each harrowing act with a goofy send-up, reminding me of Chibi from Japanese Manga: cutesy, cartoony representations of the main characters.

Unlike the exercise in restraint and grace that was last year's Quidam, Dralion is a study in exuberance and dazzling verticality: a thematic melange that strings together one superlative performance after another.

Dralion plays at Copps Coliseum until April 29. You can check out HECFI for more information and to buy tickets. 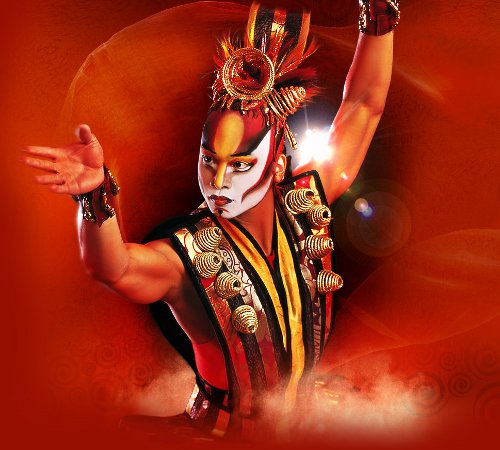 What about seating recommendation? Give the use of the wall, is it better to view the show head on, from farther away, or closer from the side of the stage?

I saw Quidam when it was in town, and it was fantastic. I've been toying with the idea of seeing Dralion and I think you've convinced me to go. Thanks for the review.

I saw this show on Friday night -- it was my first Cirque experience and I was thoroughly impressed. Our seats were at the side of the stage at first... which was definitely sufficient, but there were empty seats closer to the middle that we boogied into at intermission so we could see the other side of the back wall (it's curved, so it was hard to see the other side, or into the center where the performers would peep out or dance). But like Ryan said, the acts do involve a lot of rotation and it's dazzling from just about any seat.

I thought the clowns really pulled the show together... they were hilarious. There is a sequence with a musical saw that was very cool.

Spectacular! i was impressed on so may levels (acrobatics, dance, music, sets, showmanship...) A world class show!

My first Cirque du Soleil show, and certainly not my last!

Went to the Sunday 5 pm show.

Was a little disappointed with the sedate crowd, too many of whom arrived late, creating a bit of a disturbance for the first 10 minutes or so of the show.

Several times the some of the performers tried to get a response out of the crowd who appeared to be sitting on their hands. I felt a little sorry for the performers (consummate professionals all!) and a bit embarrassed for our city. (shrug)

However, that didn't stop the four of us from having a great time. Will definitely go again.

Hamilton is lucky to have such shows!

Saw the Saturday night performance...it was a great show. The trampoline extravaganza was definitely my favourite part! :-)