In Quidam, the performers continue to push the limits of strength and balance, but their demonstrations are more exercises in restraint and control than death-defying abandon.

Cirque du Soleil: Quidam is the story of a young girl whose attempt to escape her dismissive parents provokes the arrival of a fantastical array of characters, led by a mysterious figure with an umbrella and, curiously, a blue bowler hat - but no head.

The girl picks up the hat and is transported, parents and all, to a world of imagination in which she is encouraged to look inside herself and create the excitement and meaning she so desires.

That's a slender reed on which to hang a two-hour-plus narrative, but we go to Cirque du Soleil for the exhibition, not the exposition.

The texture of the performance felt a bit like Alice's Adventures in Wonderland crossed with Pan's Labyrinth: whimsical and bursting with non-sequiturs, yet carrying an undercurrent of menace. At times the world of Quidam felt dangerous, even macabre.

I took a picture of the stage while the audience were still drifting toward their seats. Five large aluminum rails curve up and loom forward in an arch from the back of the stage, providing a rigging for the aerial acts. 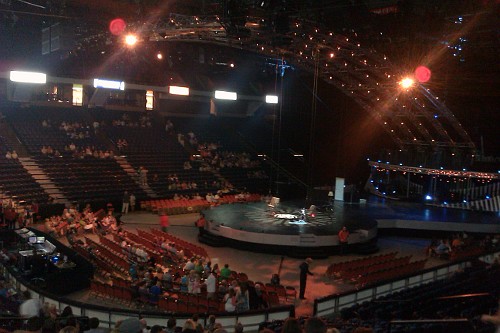 The Quidam stage before the show

When the performance began, an announcer asked the audience not to take photos as a matter of safety for the performers - an unexpected flash at the wrong instant could be disastrous.

(Aside: the number of people texting on their mobile phones during the performance was really distracting. Seriously, folks - whatever it is, it can probably wait for an hour until the intermission.)

I hoped the overhead rigging portended another dazzlingly vertical show like 2009's Alegria, but this show was not nearly as bombastic. It was more horizontal, more playful, more dance-oriented - but definitely less breathtaking in its superlatives. An acrobat on a rope swing in the penultimate act provided the only point at which I actually gasped.

An early act with a performer on a German Wheel set the tone for the show: the performers continue to push the limits of strength and balance, but their demonstrations are more exercises in restraint and control than death-defying abandon.

In another segment, a pair of actors painted as statues moved with incredible slowness through a routine that had the woman upside-down, her shoulders resting on the man's shoulders in a feat of balance that didn't seem like it should be possible.

Highlights included an aerial contortionist suspended in a red silk band, an acrobatics routine in which groups of performers tossed acrobats through the air to each other, and a richly choreographed dance of intermingled solo and group skippers.

There were a few rough edges - a juggling toss that didn't quite connect with its recipient, an amazingly convoluted skipping manoeuvre that needed a couple of runs to get right, a released red balloon that just missed the suspended cage for which it was intended - but the performers never lost their cool and the band adapted seamlessly to changes in timing.

In the case of the choreographed skipping, the false start served mainly to increase the audience's delight when the large company pulled it off on the second attempt.

Every circus needs a clown, of course, and Quidam's clown was a genius of physical comedy. In one hilarious segment, he draw a cast of accidental actors out of the audience, assigned them roles and had them perform a scene of romantic betrayals and crimes of passion. Between that and his earlier wooing of another good-natured audience member, the clown stole the show for me.

What I really want to see, next, is a Cirque du Soleil adaptation of Pan's Labyrinth.

Always makes me think of this (from 4:20):
http://www.youtube.com/watch?v=rTMbd5HG6Do

You pretty much just described every movie Neil Gaiman ever made.

And yeah, I've got tickets.

From a man who had never been a fan of Cirque du Soleil, here is the review by the Spec’s critic Gary Smith.

Have front row tix tonight. Huge fan of cirque but this will be my first time in an arena. The previous five shows were in the big top. thanks for the preview. Wish we had more big acts at Copps. Would it better if hecfi were privatized and linked to groups like AEG. ... Which would help with NHL dreams.

HECFI has forged a relationship with Live Nation Entertainment in recent years, and Live Nation is usually the reason why a big show ends up at Copps (Tim McGraw, NKOTBSB and Pearl Jam are all Live Nation shows, for example, as were past stops from Rush, Brad Paisley, Elton John, The Who and Bruce Springsteen) and occasionally Hamilton Place (Janet Jackson coming up, also recent dates from Sarah McLachlan, Jackson Browne, Goo Goo Dolls).

I hope it works out for them. I went to the afternoon show today and there were an alarming number of empty seats.

We used to go to shows like this all the time, but who can afford to anymore. 218 days locked out of US Steel kind of destroys the entertainment budget and the community economic spin-offs that come with robust employment.