This book is an eminently readable introduction to the history of North American building stones, and several chapters are of direct relevance to the 'urban geology' of southern Ontario.

David Williams writes magazine articles and books about natural history. He grew up in Seattle, studied geology at a college in Colorado, worked as a Park Ranger in Arches National Park (Utah), and the Frederick Law Olmstead National Historic Park (in Brookline MA) and returned to Seattle in 1998. His first book was A Naturalist's Guide to Canyon Country, followed by The Street-Smart Naturalist, which focused mainly on urban landscapes and natural history in the Seattle region.

A detailed outline of the book under review, excerpts from reviews, and colour illustrations (not in the original book) can be found at outline.

No copies of the book are currently available in any of the libraries in the Greater Hamilton area. This is a pity because several chapters are of direct relevance to the "urban geology" of southern Ontario, and the whole book is an eminently readable introduction to the history of North American building stones.

Each chapter covers a different regional building stone, its geological origin, the lives of pioneer quarry men, and the details of the techniques used to exploit the stone, from the earliest quarries to the present day.

This review focuses on the chapters of greatest relevance to southern Ontario: Chapter 1: "The Most Hideous Stone ever Quarried" (about New England brownstones); Chapter 6: America's Building Stone (about Indiana limestone); and Chapter 8: The Trouble with Michelangelo's Marble (about Carrara marble). But first a word about access to the book.

My wife and I recently began to experiment with eBooks. We chose Kobo, but the following remarks would also apply to any reader that uses ePub, the standard format used by most readers (except Kindle). Its relatively advantages and disadvantages are well summarized in the link to Wikipedia.

Stories in Stone is a book of non-fiction, but it has relatively few end-notes and illustrations - which is a good thing if you are reading the ePub version: it is not easy to jump from end-note to text and back, and the illustrations (in black and white) are too small to be very informative. On the positive side, aging readers may appreciate the reader's light weight, and its ability to display the text in several different font sizes.

Be aware that ePub versions are available from several different on-line sources. It is easy to purchase and download the book, but the prices vary: they are generally at least as cheap as the paperback version of the book (if it exists).

Kobo frequently offers the lowest price, but the file, once downloaded to your computer, can be read only on the registered Kobo reader - it cannot be copied to a different Kobo (or any other) reader. This is not the case for versions sold by many other vendors.

It was Edith Wharton who described brownstone as the "most hideous stone ever quarried," an opinion not so dissimilar to the one expressed many years later about the Birks building by a mayor of Hamilton. The brownstone story began in New England long before railroads and canals made it possible to import the stone to southern Ontario.

The earliest quarries, at Portland CN were opened in 1690 to supply stone locally, but commercial operations began in 1783, and by the mid 19th century several hundred workers (many of them Irish immigrants) were employed in the quarries, not only in Connecticut but also in New Jersey.

Brownstone was extensively used in New York City, Boston and other urban districts in the northeastern USA. In the 1880s, its use spread to Buffalo and other cities, for use in the newly fashionable Richardson Romanesque Revival buildings, and it was then that it began to be used in Ontario.

There are two interesting connections to the history of geology: the first, described in detail by Williams, was the discovery of dinosaur tracks in the stone (before the discovery in America of dinosaur bones). A second, much later development, was that the Connecticut stone was the subject of a doctoral thesis at Yale (completed in 1936, published in 1950), by an eccentric Russian immigrant, Paul D. Krynine.

This was one of the first thorough studies of the microscopic petrography of a sandstone, and proved to be an inspiration for those geologists who developed "sedimentology" as a new discipline that flourished in post WWII America. Krynine moved to PennState University, where his remarkable teaching inspired a new generation of student geologists, many of whom played large roles later in both academic geology and the petroleum industry.

Not least was Robert L. Folk, who applied Krynine's approach to the study of limestones with great success, and who was his equal not only as a teacher, but also as an eccentric. He appears as a major character in Chapter 10 of William's book (on travertine).

Travertine is a building stone, much used by the Romans, which was deposited from hot springs. Folk found evidence that the process of deposition was at least partly due to the action of bacteria - and perhaps by much smaller forms ("nanobacteria"), which were later found in Martian meteorites! 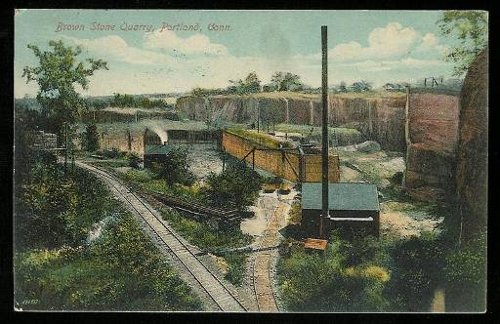 Figure 1. A postcard view of the Portland brownstone quarry (about 1910, from Wikipedia).

America's Building Stone tells the story of the Indiana limestone quarries, which supplied more building stone to the United States than any other quarries. Williams describes its use in the immigration station at Ellis Island, at the White House, the Empire State Building, and elsewhere.

First quarried in 1827 for local use, commercial development began in 1832, but it could not be widely marketed until the quarries were connected to wider markets in 1853. Sales really increased in the 1870s, when rail connections to Chicago, Boston and New York were established.

In many respects it is the ideal building stone: a freestone that can be cut in blocks of almost any size, in any direction. The stone, also known as Salem limestone, is composed of well-sorted fine to medium sand-sized grains of broken and rounded fossils (bryozoans, brachiopods, crinoids and foraminifera), and is easily carved or finished to a smooth surface with an attractive cream colour.

Williams describes in detail how quarrying methods developed over the years: by the 1920s, the quarries were producing more than 10 million cubic feet of building stone per year, about 70 percent of all the dimension stone produced in the USA.

Recent studies have shown conclusively that the Mississipian carbonate sands that produced the limestone accumulated as large shoals in shallow water, with the sand swept away by tidal currents from where the organisms flourished.

A close (but not perfect) analogy is provided by the oolitic sand shoals [PDF] in the Bahamas. The best studies, based on detailed work in several quarries, has been done by a group working in Indiana at the Indiana and Kansas Geological Surveys, and published in only an obscure guidebook: their results are summarized briefly by Williams. 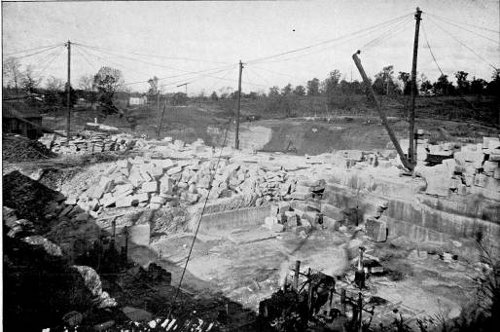 Figure 2: The Bedford quarry in Indiana Limestone (Plate XXVIII in Merrill, Stones for Building and Decoration, 1903). 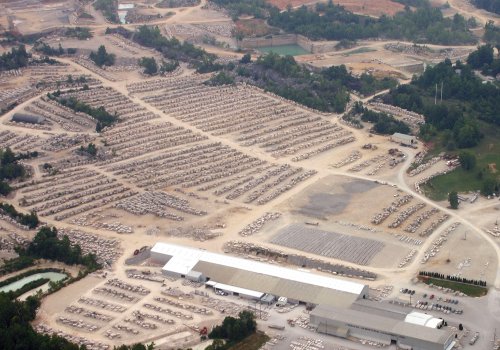 Figure 3. An aerial photograph of a modern quarry in the Indiana limestone (courtesy of the Indiana Limestone Company). The active quarry faces are behind the stone block "parking lots" in the foreground.

In 1903, when George Merrill published the third edition of his definitive book Stones for Building and Decoration, limestone was selling for less than 1$ per cubic foot: by 1960, when Hewitt reviewed the production of building stone in Ontario, less than 60,000 tons, about 900,000 cubic feet, were being produced at an average price of about $12 per cubic foot.

So the value of the annual production of Indiana limestone probably peaked at about $100 million per year. For comparison, a single large oil field could easily produce a million barrels of oil per year, which at early 20th century prices, would have been worth $20 million.

Canadian oil sands currently produce more than one million barrels per day. All of which perhaps explains why the petroleum industry employs thousands of geologists, and the building stone business almost none, and why more scientific studies have been made of the Salem limestone as a reservoir rock (which it is in Illinois) than as a building stone.

The first major construction, however, was a new City Hall, designed by Stanley Roscoe, the City architect. It was completed in 1960, and (as usual) the location and design were controversial - but dissent seemed to be mainly about the choice of a white marble from Georgia as the cladding on the exterior.

Why not use a cheaper, local stone? As far as I remember, no one questioned the choice of stone on structural grounds. After the Hall was completed, however, there were some problems with the cladding (I do not remember the details; maybe a reader will) but they seemed to be solved, and the matter lay dormant until plans were developed for the recent renovations.

As far as I know, no one in Chicago ever considered Hamilton's experience when Standard Oil Company of Indiana hired a leading American architect Edward Durell Stone, to design a new headquarters for the company. The design, duly built in 1970-1972, made use of 44,000 panels of Carrara marble from Italy - Michelangelo's favourite stone.

Trouble began only a year after construction, and continued until 1992 when the last of the marble panels was replaced by granite. The refit, described in detail by Williams in Chapter 8 of his book, cost $80 million - which makes the recent cost of renovations for the City Hall ($74 million, which included much more than re-cladding) seem like a bargain. For a well illustrated account of the City Hall renovations, see Civic Pride.

But the story, unknown to Williams, whose book was published in 2009, does not end there. First Canadian Place in Toronto was built in 1975, and also made use of Carrara marble cladding - troubles did not begin until slabs began to fall in 2007.

The renovation project, which replaced all the marble with glass panels, and included some other expenses, cost over $100 million. The moral is that marble, despite its aesthetic value, is not a suitable stone for cladding large buildings in northern climates.

There is much more of interest in Williams' book; and surely at least one copy should be bought for the Hamilton Public Library system.

My backyard chicken coop is clad in Carrara marble and so far it has performed marvelously.

Actually I'm more surprised McMaster library doesn't seem to have it in their collection.

I can't speak for marble buildings elsewhere, but the problems with our City Hall, I believe, were due to substandard anchors installed by the Pigott company to hold the sheets of marble on - which eventually began to fail and nearly killed at least one councillor.

I can't speak to the general issues surrounding marble in northern climes, but the stuff has some pretty weird thermal characteristics so I wouldn't be surprised (why it's so good for ice cream etc). In these cases, though, a big part of the problem seems to be that instead of building the walls out of stone, we've attached it as ornamentation.