Replicating The Lister: An Update

Will Warren Green restore the Lister Block in a way that preserves its architectural and historical significance? Not likely.

Regarding the restoration of the Lister block, Warren Green of the Hi-Rise Group was recently quoted as saying, "There's nothing historic about bricks". The Hi-Rise Group is a partner with LIUNA in redeveloping the Lister Block into office space for municipal workers. 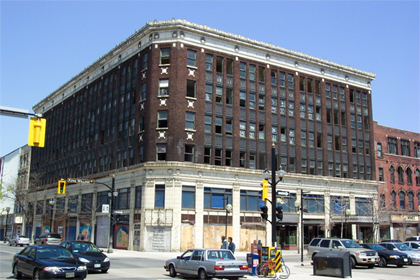 Warren Green has never been very adept at public relations, but I doubt very much that Joe Mancinelli of LIUNA is overly impressed with his former rival's latest comments. Both Hi-Rise Group and LIUNA were finalists for the new federal building on Bay Street, which was eventually awarded to Hi-Rise.

The federal building is not living-up to its promises. It reminds me of a suburban office park. The design is bland, the stubby nine floors wasn't enough space to house all of the federal employees (the reason for the building in the first place) and it appears the economic impact is negligible - Jackson Square still has the west end of the mall closed despite the fact that the federal building is right across the street.

LIUNA, on the other hand, has a decent track record, particularly with the restoration of the CN Station now called LIUNA Station. However, they are not entirely innocent when it comes to Lister. The Lister has survived several fires, three in 1996 and two since LIUNA took ownership in 1999. The fires have been called "suspicious".

Under LIUNA's watch, the building has been left open to the elements, and by-laws that enforce minimum building standards have been violated flagrantly. The Lister's only protection is the weak "historic designation" that the Tivoli also enjoyed (may she rest in peace).

Since 1995, there have been several plans for the block, including a student residence for McMaster, a mixed-use, twin-tower hotel and condo plan, a potential site for the federal employees and this latest, office space for our municipal employees.

Warren Green does not appear to want to preserve any part of the Lister - except the name. He told the Hamilton Spectator that it would be too expensive to preserve the building. If this isn't a red flag for the city I don't know what is.

First of all, the city is effectively subsidizing the "preservation" and reuse of the Lister by paying twice the going rate for office space. The planned $40 million restoration is dependent on the city paying $30 million for a 15-year lease. In that case, I can restore the Lister myself. I'll tell a bank I have 75 percent secured for a 15-year mortgage. 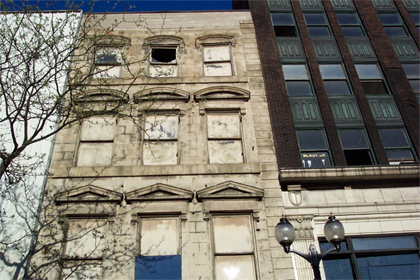 I'm sorry, but I don't believe Warren Green will restore the Lister. Hi-Rise and LIUNA will rebuild something that resembles it, minus anything that makes it architecturally and historically significant, and then Warren can glue some do-dads from Home Depot to the façade and justify the 200 percent premium to the city.

I imagine that before any construction can begin, contracts and ironclad leases must be signed. Then once construction begins, we'll hear reasons why this and that can't be restored - "the damage is worse than expected" - and reasons why the indoor promenade isn't feasible and why additional floors (for tenants other than municipal workers) can't be added.

By this time, the promised building will resemble the federal building on Bay Street, far more than our once glorious Lister. We'll be stuck with a 15-year lease that pays double the market rent prices for a building that has nothing "premium" about it.

I would love to see us proceed between now and the winter months with the actual development of the project and then start construction sometime in the spring. I don't know if that's aggressive or not. It all depends on how many yeses we get from all the different groups.
-- Joe Mancinelli, LIUNA President (Hamilton Spectator, July 2004)

After this statement, Mancinelli named Frank D'Amico, former City Councillor, the spokesperson for the Lister Block project. It's now October 2005, and Mr. D'Amico has been an incredibly quiet "spokesman".

Red flag or not, the Lister needs to be put back to use. If it can't be replicated through an honest effort, then is it too much to ask that the replacement be an equally proud building?

With the AGH renovations finally getting it right the third time, it is possible that Hamiltonians now know what a good, architecturally pleasing, and functioning building really is.

The Lister dominates what should be a focal point downtown. It is the gateway between James North and the Gore. A sweetheart deal shouldn't be required to make something happen here.

Like Mancinelli said, "it all depends on how many yeses we get." It now seems that someone said "no", and probably for good reason. I would prefer to wait and have it done right.