Earth to Table Bread Bar owner Jeff Crump has some suggestions for how the City can make it easier for entrepreneurs to invest in Hamilton.

Earlier this month, Jeff Crump, chef and owner of the Earth to Table Bread Bar on Locke Street posted a cri-du-coeur on twitter:

Would love to open 2nd Bread Bar but the thought of dealing with the city....

Curious for details of what he experienced, we contacted Jeff and asked him to share his thoughts on how well the City works with entrepreneurs and what it could do to make Hamilton a more attractive place to start a business. 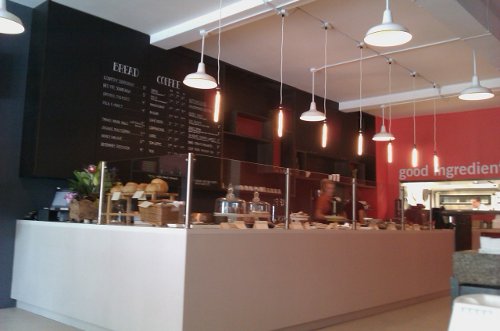 Inside the Earth to Table Bread Bar (RTH file photo)

Ryan McGreal, Raise the Hammer (RTH): What do you think is the biggest obstacle to starting a new business in Hamilton?

Jeff Crump, Earth to Table (JC): My business experience is only with Hamilton so I can't comment on the difference between this or that city. I believe the hardest obstacle is the age-old one of money. In relation to dealing with the city, time is money, delays cost money, so entrepreneurs must be prepared.

RTH: What should the City be doing differently to make it easier for entrepreneurs and investors?

JC: I believe the city should offer navigation of the "red-tape" as a service. The different departments seem to be disconnected.

Opening a business is incredibly stressful and time consuming. Spending time and energy trying to navigate the different departments in order to satisfy code and occupancy requirements was most frustrating.

At times I felt like my relationship with the city was a bit combative. I know the city employees that I was dealing with had the best intentions but I just felt it could have been much more seamless.

RTH: What advice do you have for other would-be entrepreneurs looking to invest in Hamilton?

JC: Hamilton is a great city, full of vibrant, progressive people. It seems like a cliché now but we don't give ourselves enough credit.

From a restaurateur's view, this city is begging for more great food. Bread Bar has been so well received we are just thrilled to be part of the evolution of the Hamilton food scene.

My advice to would-be restaurateurs? Cook real food! Hamilton is starving for it.

If you can budget for it, hire a fixer (someone who is familiar working with the different city departments). I met more than my share while I was sitting at city hall, arms full of building plans, permit applications and fee cheques.

RTH: If you do decide to go ahead with a second store, what locations do you have in mind?

JC: Hamilton has so many interesting locations and neighborhoods. We spent the better part of a year looking for the first location. Locke Street was the best fit for us at the time.

The locations we scouted were:

Thanks for the interview Ryan. Jeff doesn't seem as jaded as some of the others I've heard about when dealing with the city. It's unfortunate Jeff needed to recommend the "fixers" vs. a city employed fixer who can run you through the system and help you get around roadblocks. From what I've heard the "fixers" have developed quite a lucrative trade within City Hall.

My vote is for Ottawa Street. We used to buy bread and pies from Bettina at the Ottawa Street Farmers Market every weekend a couple of summers ago, and really miss her absence with the opening of the Bread Bar.

From my totally uniformed perspective, James North and Westdale seem be too immediate. Ottawa North would be an affordable alternative to the obvious: Ancaster (ridiculously starved for decent food options) and Dundas (becoming a gourmet haven), both of which have desirable consumer demographics. And real estate prices to match, which was surely part of the Locke South algebra.

Ancaster/Dundas may have another geographic advantage over James N/Ottawa. Detour is twice as close to the Mill as Mulberry is, for example, and marginally closer than MDJ. If you assume that the principals would be overseeing two businesses as well as the Mill kitchen, that might be a valuable distinction.

I'd vote for James North #1 and King St Dundas #2. Thx for the interview Ryan.

How about at the corner of Cannon and Victoria, there is a big building for sale there.

Which building is for sale?

A tip is that Ward 3 is going to be the hottest place to invest over the next five years.

Matt I think the building is at the corner of Cannon and Elgin. Travelling west on Cannon it is on the south side just before the food bank.

Very large building, prime for residential redevelopment. I think it was a garment factory or something at one time. Needs work though. Its in rough shape.

nothing on that corner ... could be king and victoria but that one sold ...

After reading this interview I can only assume the "one stop shop" did not get accomplished? If that is the case, who should be held accountable for the failure?

We spent a significant of money to ensure Economic Development was a "one stop shop".

I live at Cannon and Victoria and the only building is a Korean place and Bunny Rugz pawn shop (to be kind I'll call it that). I would love someone progressive to buy it, but it would take more remedation then West Harbour.

Acutually the korean place has good food ... and i lived in chinatown toronto for 20 years ..

Thanks for the dinner inspiration!

(sang to tune of Animal House.)

NàRoma Pizza Bar "The wait continues for the opening of NaRoma Pizza Bar because of city regulations. The oven had to be moved 16 inches to the left .... how are you"

In fairness to the city I think that they have made some improvements in this area. Although not enough. Businesses should not have to employ someone to help them go through city beaurocracy - that's the city's job!

This is something I've discovered as well. It seems generally people want to help, but the helpful people lack the authority to do what is needed.

No place, especially a place like Hamilton, should have the insane amount of red tape & more contradictory red tape that exists here. Hamilton's reputation proceeds it. Business is being chased away by the horror stories (Except that horror stories are fiction, & our rules, regs, & by laws are not.)
We don't need 'facilitators'. We need a city that is interested in growth, that has clear & available & transparent rules for opening businesses with the GHA.
Hamilton clearly is not interested in doing that. So what is it interested in?