Ben rattles the bars of his subterranean cage in this month's WOTS.

OK, who's up for a little 'Hamilton Shuffle'? Come on - you know how it goes! Our beloved Hamilton finally takes one giant stride forward (Art Gallery of Hamilton) - and follows it with two huge jumps back (Aerotropolis, Staircase closure)!

While we at RTH are fully committed to our never-ending bout of eternal optimism, even we have to admit that it can sometimes be hard to find more than a few dregs at the bottom of the Hamilton glass...

But fear not, cos we've found 'em!

So let's all drink and be merry, forget all our troubles, and hop onto the dance floor for another rendition of everyone's favourite jig - The Word On The Street!

Let's kick this off with the downtown beat [no, we don't mean the core is exhausted - Ed.]. Downtown revitalization continues to set our hearts a-flutter. Here's a little bit about what's happening in and around the core these days:

Now let's get with art scene!

A new environmental taskforce was announced last month by the Provincial government. It's called the Greenbelt Council and features Linda Pim of Ontario Nature, as well as the Chamber of Commerce's Rebecca Wissenz.

I went to a Smart Growth presentation given by Linda last year and she is definitely one smart cookie. Here's hoping the rest of this group gears up to bring us more remedies to our urban sprawl malaise very soon.

It's nice to see Hess Village finally getting some good press, these days. Here's what we've got to add to the on-going buzz: 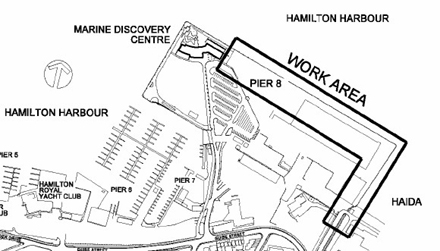 That's all for now, folks! How about we end this issue's WOTS with a quick rendition of everyone's Hamilton favourite? That's right: The Hamilton Shuffle!

1-2-3-4...
You put your right foot out!
Your left foot back! (2 spaces).
You just spoke to your Councilor
And you give your head a smack.
You're feeling pretty ropey and
You are Toronto bound...
That's what it's all about - Hoy!