This church demonstrates the change in the character of ecclesiastical Gothic architecture in the quarter century that elapsed between the construction of the nave and chancel. 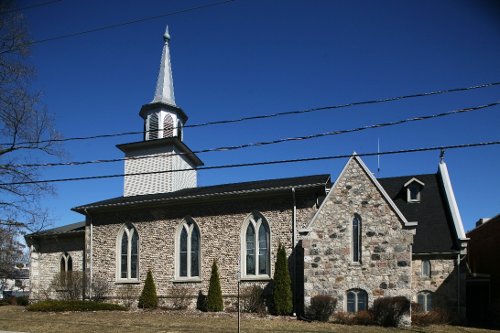 The nave was built in 1839 by Levi Boughton, a mason who moved to Paris in 1838 from Normandale, New York, and introduced cobblestone-faced masonry to the village of Paris (Fig. 2). Cobblestone buildings are extensive in upper New York State and the technique may be traced to the county of Sussex in southern England, as at St Andrew, Hove, Brighton (1833)(Fig 3). 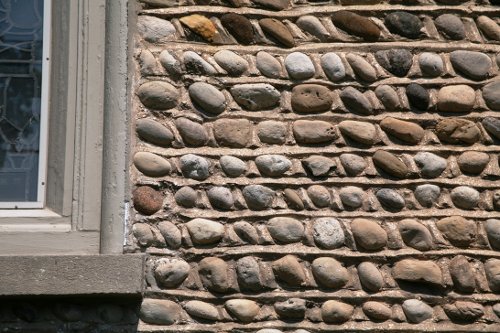 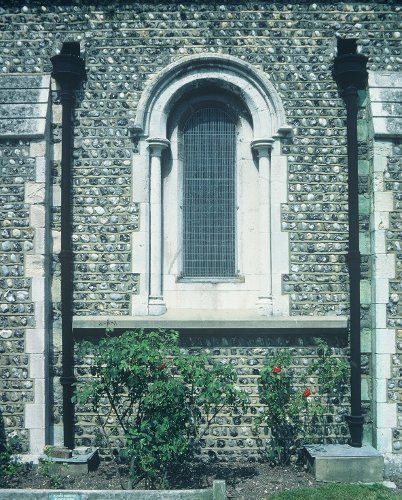 The description of St James's church given in the 1883 History of the County of Brant, Ontario (pp. 480-481) is remarkably well informed in architectural terms:

The roof is flat, the windows are of the kind designated by architectural experts "Carpenter's Gothic," and the west end is surmounted by one of those nondescript belfries, terminated by a tin-covered spirelet so often seen in country churches in Canada, and whose real origin is in the renaissance style imported into Lower Canada by the French in the eighteenth century'.

In 1865, at a cost of about $1,000, a chancel was added through the exertions of Dr. Townley, and by the beneficence of Mrs. Dickson of Paris. The chancel presents a marked contrast to the rest of the church, being a genuine Gothic of the "early English," or "first pointed" style. The roof is of open work, of dark-stained timber. The east window is a triplet, each light bordered with stained glass, of which also there are four vesica-shaped medallions bearing the four Evangelistic symbols, and in the centre an Agnus Dei supporting a banner with the cross, 'displayed'.

It is also recorded: "In the basement a well attended Sunday school is held, numbering 100 pupils".

The description shows an acute awareness of the change in the character of ecclesiastical Gothic architecture in the quarter century that elapsed between the construction of the nave and chancel of St James's church.

The nave is a rectangular box with a low-pitched roof based on the work of the British architect, James Gibbs (1682-1754) whose designs were made popular with the publication of his Book of Architecture in 1728 (Fig. 1).

Above the western bay of the nave there is a square tower, originally with single pointed arches on each side, which is surmounted by an octagonal belfry with a pointed opening on each side, and a spire. A late 19th-century photograph shows a 'widow's walk' at the top of the tower (Fig. 4), as in St John's Anglican Church, Ancaster, ON, 1824 (see: St John's Anglican Church, Ancaster: An Architectural History, figs 1 and 2). 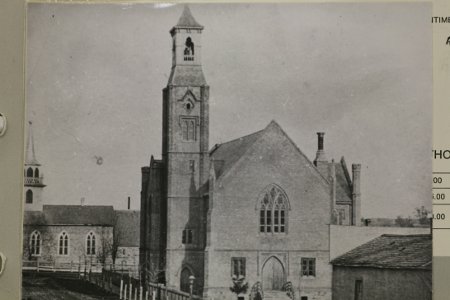 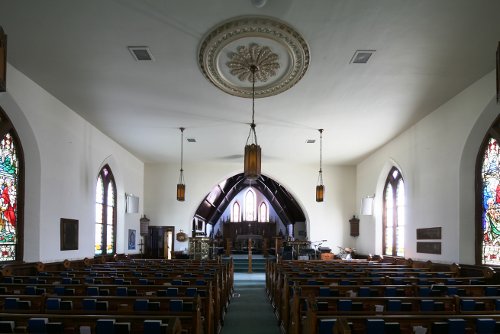 While medieval architectural precedent may be found for the Y tracery of the windows, as in the southwest chapel of Lincoln Cathedral (circa 1220), the use of the pronounced wooden frame with Y tracery has rather more in common with the 18th-century Gothic tradition of Batty and Thomas Langley as published in their 1742 book entitled Architecture, Restored, and Improved, by A Great Variety of Grand and useful Designs, Entirely New, In the Gothic Mode For the Ornamenting of Buildings and Gardens, pl. LIX.

Inside, the nave is covered with a flat ceiling with a centrally placed medallion adorned with rich acanthus foliage and a modified Vitruvian-scroll frame (Fig. 5 - 7). 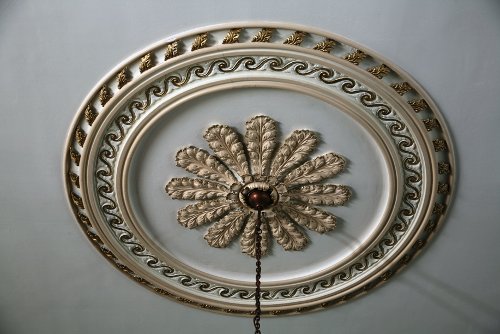 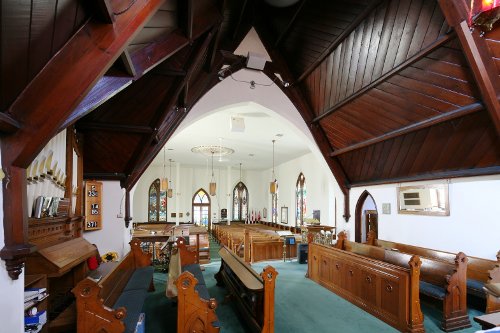 It is unlikely that the 1839 church had a separate chancel because in 1860 Reverend Townley started a Chancel and Sunday School Fund with the view to erecting an addition to the church. The original interior was probably similar to the exactly contemporary Holy Trinity Anglican at Chippawa, with the altar space defined by the semi-circular rail (Fig. 8). 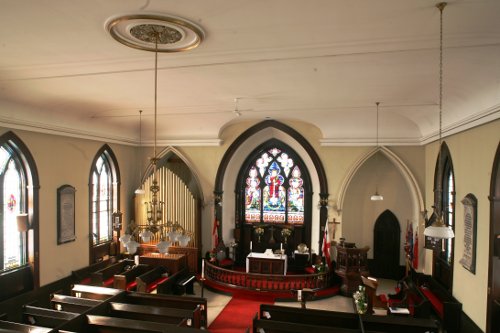 In 1863/5 the present chancel at St James's was erected with the Sunday school in the basement plus a vestry to the north and organ room to the south (Figs 1 - 4), to the design of John Turner, architect of Brantford. Turner's addition is a fine example of the impact of Ecclesiology on Anglican church architecture in Ontario.

Founded as the Cambridge Camden Society in 1839 and renamed the Eccelsiological Society in 1846, this group advocated careful study of English Gothic churches of the Middle Ages and their use as the models for the design of new Anglican churches throughout the world. On the nave and chancel, the Camden Society stated:

This division, essential in the interior, is not always to be traced in the exterior. It is far better indeed, generally speaking, that it should be marked in both; and to this end the breadth of the Chancel should be a little less than that of the Nave; a difference of four or five feet will be quite sufficient. The height of the Chancel is usually less, in the same proportion

The comparative size of Chancel and Nave is a point which, within certain limitations, must be left to taste. Yet, as a general rule, the Chancel should be not less than the third, or more than the half, of the whole length of the church.

The new chancel at St James, Paris, is "correctly" constructed in local fieldstone with a steeply pitched, open timber roof and triple lancet windows in the east wall of the chancel to represent the Trinity as suggested by the Camden Society: "[t]hree lancets are the most usually adopted; these, it need not be said, symbolise the HOLY TRINITY".

The lancets retain their original stained glass with its rich colours and stylistic details based on 13th- and 14th-century precedent (Figs 9 and 10). The chancel is raised three steps above the floor of the nave - the Camden Society prescribe that the chancel 'should be raised at least two steps at the Chancel arch', and the altar against the east wall of the chancel is elevated further two steps. 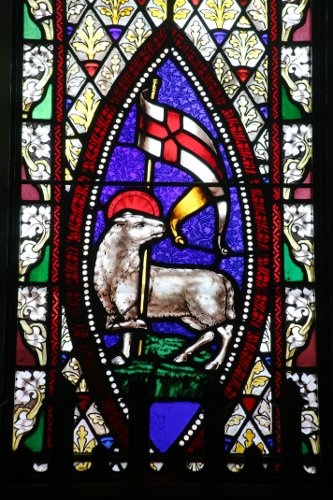 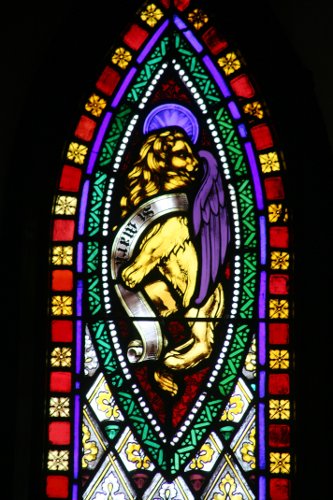 The Camden Society also recommended that the vestry "may be thrown out, as was often done, on the north or south side of the Chancel". Analogous additions of a "correct" chancel in Anglican churches in Ontario may be seen at St Mary's, Picton; St Mark's, Barriefield; Holy Trinity, Hawkesbury; and Christ Church, Holland Landing, and a similar arrangement is recorded at St John's Ancaster. Be that as it may, the inclusion of the Sunday school in the basement is not part of Camdenian doctrine. Instead, it is inherited from a non-conformist tradition in which it was common to include Sunday school rooms as part of a full basement.

Turner's design is a thoughtful and practical solution to the requirements of the Anglican of Paris. Rather than providing a slavish copy of a medieval model, he works with the principles of Gothic design according to the wants of a congregation in the 1860s.