As people places go, successful public squares have the most important ingredient - people - in abundance.

What the hell is she doing? Nobody will take it if you hold it like that!...how hard can it be to hand out a few brochures ... Uh, Oh. What's he got there, a drum kit? Maybe he's homeless, he looks pretty scruffy ... Woa! Look at her go! What is she haggling over, a headscarf? That vendor doesn't look too happy, he looks like he wants to ... Now what's this? Looks like some kind of protest. What does that say? "Save the Falon Gong Orphans" - what's that about? Maybe that's what these brochures are for ... Now what? Hey! Go Drummer Boy! Holy crap, he's good! Hold up, now who's shouting? Ah! I think the deal's off sister...watch what he does with that headscarf, I think he's going to ... Hey! That's got to hurt ... Man! This place never stops...

It certainly doesn't. "This place" is Dundas Square in Toronto. I was down there four Saturdays ago waiting for my missus to finish her H&M shopping. Rather than stand around outside the changing rooms churning out obligatory compliments, I decided to hang out outside and do some people watching. 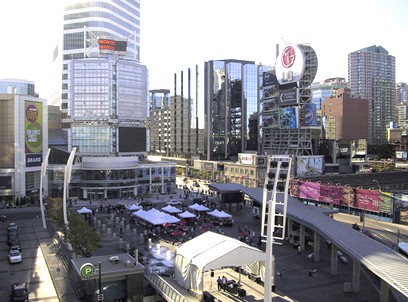 Dundas Square, Toronto: the secret is many people present at all times of the day

Anyone who has ever been to Toronto's 'official' downtown can attest to its shear happeningness. Sure, it's a dog's breakfast of a Public Square - made a million times worse after they tried to actually turn it into a public square - but there's no denying it is hopping like nowhere else in Canada. Well, Ontario, anyway.

By all accounts, Dundas and Yonge is the busiest spot in Ontario, and it will soon be even busier after the Canadian Music Hall of Fame opens for business sometime next year. It's not hard to see why Hamilton lost out to this venue. If you had to choose one word to describe this place it would simply be: People.

People pour out of everywhere: the Eaton Center, the subway, the streetcars. Some of them stop but most are simply wading up and down or side to side across the heaving arteries that knit together this remarkable piece of the core. As people places go, Dundas Square has the most important ingredient in abundance.

But what else makes it a great - or a not so great - place to be? What purpose do these people places even serve? After all, let's face it: by their very design Public Squares are simply places where people go to mill around and do nothing. Unless you count protesting or juggling and handing out religious paraphernalia, no-one is spending any money or performing any useful public services in these places - right?

I mulled this over during my 20 minutes of shopping abstinence last month. I thought back to some of the people places I had visited during my jaunts around Europe. 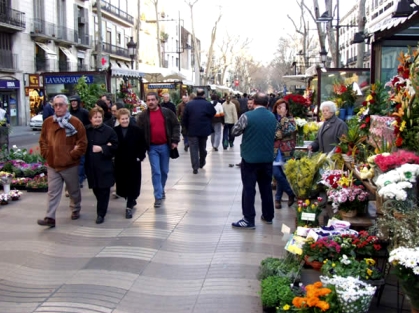 Las Ramblas in Barcelona, St Anthony's Square in Venice, and the unforgettable Spanish Steps in Rome. Ah! Why is it when I close my eyes nearly 20 years later I am there again in an instant? There is clearly something important about these public spaces - these people places.

Jon Wells, in his contribution to the Spec's 2001 "Lament for a Downtown" series, quoted Bill Vitek, a professor at Clarkson University in upper New York state: "The public self needs a place to engage...It needs centres where people can be together, not just places where they gather to be apart."

Urban analysts everywhere would have no trouble attributing the quote, "City life is on the streets or it's nowhere" to the inimitable The Death and Life of Great American cities author, Jane Jacobs.

As well, the recently released Report on Public Health and Urban Sprawl in Ontario by the Ontario College of Family Physicians defined a sense of community as "a feeling that members have of belonging, a feeling that members matter to one another and to the group, and shared faith that members' needs will be met through their commitment to be together."

"Less civic engagement leads to the loss of a sense of community," they added.

Well, that's what the experts think. Although this is all very insightful and interesting, I wanted to learn a little more. What, I wondered, is the real importance of people places? What makes them work as downtown 'hot spots' and why do they make such a lasting impression?

In an effort to understand I decided to hang out one more time in Europe, in England, in Canada - in all of the places all over the world where I have had the simple pleasure of sitting, sipping and staring at the world going by. So, please join me as I close my eyes and sit down once again on the patios, plazas and piazzas of my youth and discover: "What makes people places work - and why the hell should we care?"

Normally the maze was fairly deserted - because it was, in fact, a really lame maze - but on this one day my Church was putting on an outdoor celebration of mass featuring my Dad's painfully un-cool church band "The Mustard Seed".

The Mustard Seed was one of those weird 1980's bands with about a trillion members. There were so many people up on stage it was hard to tell if they were all even in the band. Sadly for me, I had no trouble making out the members of my family.

My Mum, on tambourine, was dressed in huge hoop earrings and a gaudy floral print dress that made her look like Mama Cass without the weight problem. My Dad - lead guitar - was sporting a pair of gargantuan porn-star sideburns and an ear-to-ear (and insincere) John Denver smile.

Worst of all were my two older sisters. They were standing in the middle, executing some kind of arthouse interpretive dance which involved lots of hand gestures and stifled laughter from the peanut gallery.

I was ashamed. Everyone was watching! Looking back now, I can see that this was just one of many public events that was par for the course for my hometown. Whether it was juggling, rabble rousing or tambourine playing, one thing was common to all my fellow Leodians: they loved to come out and play in public.

Another early people place memory was the entrance to the Leeds Town Hall. For some reason, the city had decided to paint a giant chess set at a spot where the local homeless used to hang out. This chess set, complete with giant plastic pieces that somehow never seemed to get stolen, was a hit with the Executive lunch crowd and local student population.

The net result was the frequent and curious spectacle of a CEO/CFO looking chap in pin stripes swapping pieces with some heavily bearded skateboarder dude, while the gallery of tramps - who still frequented the area - offered unrequited but entirely plausible suggestions for a next move.

To me this scene was then, and always will be, typical Leeds.

By the time I was 18, I was itching to get out and see the world. I set off around Europe and it was here that I experienced the very best that people watching had to offer. 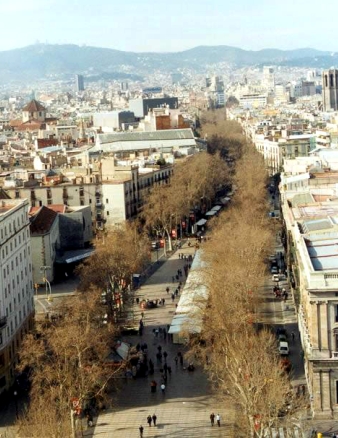 I loved this place. Perhaps it was because, like most great people places, Las Ramblas seemed to attract the very real people of the town - an entirely representative sample of everything good, bad, weird and ordinary about the local population that made it quite simply exciting - the place to be.

I walked up and down Las Ramblas for hours and in the end I was sure I understood very well what it meant to be a Catalonian.

En route to Barcelona I spent a few days in Montpellier in France, where I visited a college friend who was spending the summer down there. Mark's downtown apartment was a short walk to the local Public Plaza, La Place de la Comédie. 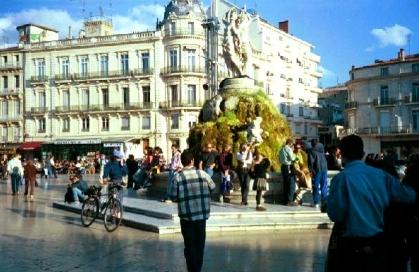 Every night we would stroll by the outdoor patios that ran the entire length of the streets, and into the Plaza. There we would sit, watching all the French people chatting, skateboarding, ranting, chanting and, of course, juggling.

The biggest attraction for us at the time was that it was free, but it was so much more than that. The architecture around the Square was almost standard fare for older French towns, which is to say stunning.

Like most Public Squares I would enjoy around Europe, it acted like a beacon to the hoards of people milling around the downtown - shopping, working, living or just, doing their thing. I thought this place was the ultimate in cool hang outs. Little did I know, the best was still to come.

Next Week: Sleeping in the Park, throwing up in Cairo, and how not to tip a British waitress. Read the thrilling conclusion to the Accidental Activist's epic, around the world, coffee sipping adventure, in the next issue of Raise The Hammer!