We have no reliable data. Our data collection system for oil is rubbish. I suspect that if we had, we would find that we are over-producing in most of our major fields and that we should be throttling back. We may have passed that point.
-- Matthew Simmons 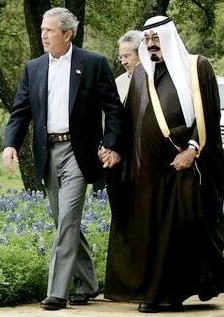 The United States is too dependent on oil to break off its cozy relationship with oil-producing dictators (Photo Credit: Environmental News Service)

The only problem is that the increase will barely be enough to meet projected demand growth. Assuming growth of 2.2 percent a year, Saudi Arabia will need to increase its output to 12.26 million barrels a day just to maintain its current share of global production.

This, of course, assumes it's even possible for Saudi Arabia to increase its output. Its reserves are cloaked in secrecy, but energy analysts like Matthew Simmons, CEO of Simmons & Company International, an energy investment agency, believes Saudi Arabia may already have peaked in oil production.

OPEC recently promised to increase its daily output in response to record oil prices, but doesn't appear to have been able to do so. After decades as the world's swing producer, Saudi Arabia may have finally reached its limit.

In the meantime, high energy prices are starting to catch up to the Canadian and American economies. Canada is experiencing higher than expected inflation this year.

More ominously, the April 13, 2005 CIBC World Markets Occasional Report #53 predicts that oil prices will almost double over the next five years. The price hikes "will follow from the inevitable collision between surging global crude demand and accelerating depletion of conventional crude supply."

Essentially, the report predicts that 2005 will mark a peak in the world's ability to increase the supply of oil (see chart, below). Prices will have to rise dramatically enough to constrain demand to what the world can produce. 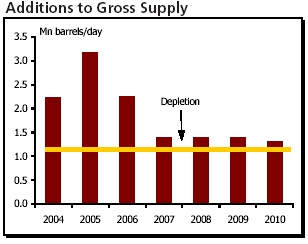 After 2005, the world will not be able to add significantly to the global oil supply