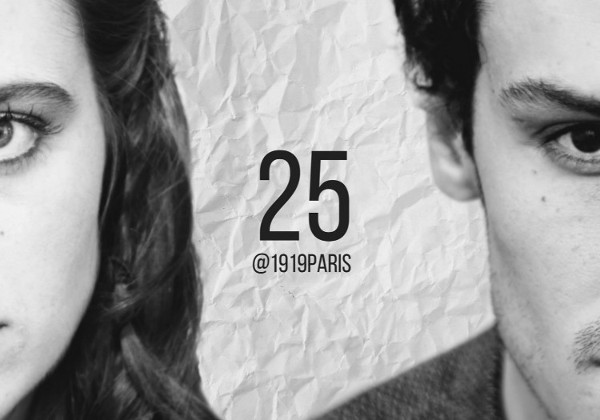 Fringe is home to diverse theatre, including the extreme avant guard that you are unlikely to see anywhere else. "25" is such a play. It's been making its way around the Fringe circuit, and it unlike most shows you are like to see in an Ontario theatre. Having said that, it follows in the creative vein of The Bathtub Girls (Hamilton Fringe, 2016) and the modern classic 4.48 Psychosis (Hamilton Fringe, 2017).

25 is a non-linear two-hander created by Eliot Delage. Delage and actor Anastasia Wells are totally committed to their roles. Movements are crisp. Voices are clear. And I would probably pay to see Wells read a phonebook.

In the play, Delage and Wells play a dozen of characters, all of them, or so we're told, are in their mid-twenties. Being a non-linear play, with lots of interconnections between the separate vignettes, the audience is left to weave together a meaning behind 25.

At the end of the night, there were quite a few lobby theories on the chronology of the pieces, and how they fit together. This is part of the joy of this show, piecing it together and thinking about it long after it's done.

Additionally, Delage and Wells are not afraid to break down theatre traditions to dramatic effect. In other words, the audience is not taken on a ride in this piece; rather, they are invited to put one hand on the steering wheel and move along with the fast-paced Delage and Wells.

Costume and scene changes appear on stage. They were so well done, one could be excused for thinking that they were a choreographed dance. The monochromatic wardrobe and set choices also add to the mystique and unearthliness of the show.

A few of us had a chance to speak with Eliot after the very late 11:00 PM show, and he was on fire, giving insights both into his process and inspirations. The show started as three scenes and grew and grew into the 45-minute feast of modern experimental theatre that it is at the moment. It's clear from listening to Delage speak that there a many, many layers behind his work.

The ending of the play is like nothing you are likely to see in any other play. Delage asked me not to say anything about it, so I will leave it at that.

As I mentioned from the top, this is extreme avant guard theatre, so expect to be challenged.