The collapse of the sprawl land use and transportation model does not lie far in some hypothetical future, but right around the corner.

On August 22, 2005, I wrote an article asking whether the world was in peak oil. In my first paragraph I answered, "It's too early to tell, although the market does show signs of being close to an absolute production limit."

A little over two years later, I think it's prudent, today, to change the answer to a provisional yes.

Consider the evidence: The US Energy Information Agency just released its September 2007 International Petroleum Monthly Report [XLS link], and the overall production in barrels per day (bpd) has been flat for the past three years. 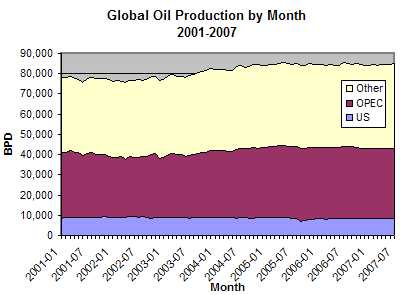 A closer look at total production reveals the flattening trend since mid-2004, as output has bounced off a firm 85 million bpd production barrier. 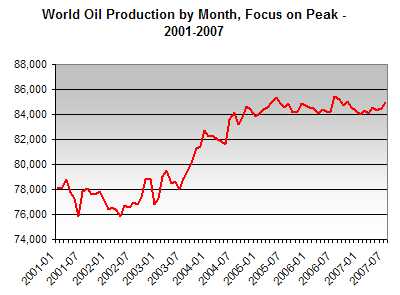 As oil prices edge up toward $100 per barrel, remember these charts when analysts emphasize political instability or pundits excoriate 'fat cat' oil companies. The real issue is what appears to be a hard global limit to the rate of production.

In response to this and other sources or data, the Energy Watch Group has just published its own crude oil supply outlook [PDF link] for October 2007, which makes a strong case that peak oil has arrived:

The major result from this analysis is that world oil production has peaked in 2006. Production will start to decline at a rate of several percent per year. By 2020, and even more by 2030, global oil supply will be dramatically lower. This will create a supply gap which can hardly be closed by growing contributions from other fossil, nuclear or alternative energy sources in this time frame.

Challenging the rosy, cornucopian forecasts of the EIA, the International Energy Agency (IEA), and other groups with a strong, evidence based analysis, the EWG report predicts that oil production will start to fall by seven percent a year.

This is consistent with many other independent analyses from geologists and economists who don't have a vested interest in reassuring consumers that all will be well.

It's also consistent with the report Richard Gilbert presented to Hamilton City Council in 2006, entitled, Hamilton: The Electric City, in which he projected that gasoline prices have a better than 50 percent chance of reaching $4 per litre within twelve years and recommended that Hamilton make energy production and conservation its economic Plan A.

(See the Raise the Hammer Special Report on Gilbert's essay and presentation to council.)

In response, in April 2006 City Council asked staff to prepare a report on ways to reduce energy use. The report was due in June 2007, but Citizens at City Hall (CATCH) reports that it still hasn't been completed.

This is arguably the single most important issue City Council and city staff should be working on. The sooner Hamilton prepares for the skyrocketing energy prices on the way, the better chance we'll have to weather the storm and create new growth industries in such a critical field.

Instead, our planning departments are still stuck in greenfield development and aerotropolis - warehousing and logistics around the airport, with transit a low priority.

In a major study conducted for the US Department of Defense in 2005, Dr. Robert L. Hirsch et al. noted:

Without timely mitigation, world supply/demand balance will be achieved through massive demand destruction (shortages), accompanied by huge oil price increases, both of which would create a long period of significant economic hardship worldwide.

We can no longer afford the luxury of assuming we can continue to build out and live the suburban sprawl dream indefinitely. The collapse of that land use and transportation model does not lie far in some hypothetical future, but right around the corner.

The sooner we cop to this reality, the better our chances. Unfortunately, too many people who ought to know better are still stuck in delusional notions about how best to plan for the future.

While I don't dispute the clear leveling off of world oil production in recent years, I'm wondering if we've ever seen similar trends in the past to suggest that these kinds of levelling off periods can occur for other reasons. With hightened Middle East political issues and guys like Chavez, I wonder if there are other issues contirbuting to the production limits we're seeing.

I believe there was a conference in Dubai in 2001, where top petroleum experts meet and they said the peek was already been reached. If you follow the world politics there is clearly a sign of mobilization for the acquisition of available sources.